So I watched Still Alice…

I was a little apprehensive  about watching this movie at first. I think Julianne Moore is a terrific actress and I really enjoy her movies but I had just watched The Theory of Everything and wasn’t really in the mood to watch another movie about a debilitating illness. But a good friend recommended it and said it had really resonated with her so I thought I’d give it a try and I’m glad that I did.

Okay basic plot: Julianne Moore is Dr. Alice Howland, a woman who has it all: a good husband, a loving family, a successful career and, unfortunately for her, a rare form of Alzheimer’s.

First of all, let me say Julianne Moore completely deserved the Oscar she won for this movie. In the past I’ve said that when an actor plays the character of somewhere with a debilitating illness it’s a fast track to an Oscar but Moore’s performance isn’t composed of the typical tics and erratic behaviour that so many others have made the foundation of their Oscar-winning performances. The brilliance of her portrayal is founded on subtlety and the expression of intense emotion without the use of grandiose gestures.

In the film, Alice’s daughter – Lydia – is an aspiring actress and after seeing her daughter in a play, she praises Lydia’s performance saying: “It was just wonderful. I found it so easy to empathize with her. You really caught her despair, but also her joy.” I think those words perfectly describe the beauty in Julianne Moore’s performance – she manages to show us Alice’s despair but also her joy. The joy she has to find every day, in every moment because she doesn’t know which moments she’ll be able to keep with her. 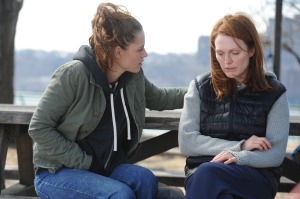 The movie is also so well written and has such clear focus. This isn’t a movie about Alzheimer’s; it’s a movie about loss. Loss of your memories, your career, your personality – loss of everything that defines you. It’s a struggle and Moore brings this struggle to life with absolute elegance and class.

Kirsten Stewart who plays Lydia also does an alright job in this movie. I don’t think she’s necessarily a bad actress, I just think she has some kind of genetic abnormality that makes it impossible for her to change her facial expression. She has some great scenes in this movie and her delivery of the lines, her tone, her presence is perfect but her face is stuck in an eternal mopey-emo deathstare. It was like watching a Steven Seagull movie.

Overall, this is a really good movie. It’s sad but not depressing and a lot of this is due to Moore’s performance but also the levity of the script. It’s definitely worth a watch, bring a tissue or two. 8/10