So I watched Harry Potter and the Deathly Hallows Part I… 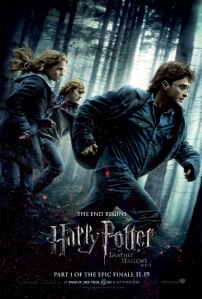 This is the movie that started the craze of turning the film adaptations of the final book in a series into two movies. It’s really an unnecessary action because there often isn’t enough content in half a book to warrant a full movie. This leads to drawn out scenes and unnecessary plot lines that don’t add to the story. It’s a giant setup and while I don’t mind movies teasing sequels or launching franchises; I prefer these teases to future movies be elements woven into the story instead of the story itself.

Okay, basic plot: Harry, Hermione and Ron set off on a quest to find and destroy all the Horcruxes in order to kill Voldemort. Only problem is that they don’t know where any of the horcruxes are or how to destroy them. So we’ll spend most of the movie watching them fight among themselves about issues that they really should have dealt with in the 6 movies leading up to this. Seriously, almost nothing happens in this movie.

This movie lacks focus. As you watch the story unfold you find yourself wondering if an entire movie was needed to tell it. This is the problem with splitting a single book into two movies. You take a story that could have been thirty minutes of a great movie and turn it into two hours of a pointless movie. The main conflict in this movie is between our heroes themselves and their doubts and fears about the mission they have just undertaken. It’s pretty much the same conflict we’ve had in every Harry Potter movie leading up to this – Ron is angry at Harry for the situation they’re in; Harry tells Ron no one forced him to volunteer for the mission and Hermione is just sitting in a corner trying to deal with the actual problem at hand.

It worked well in the movies leading up to this because it was just a passing thought, a few minutes in the movie but this time it is the movie and it’s not enough to keep you engaged for two hours. I get that the point of this was probably to convey the loneliness and desperation that our heroes must be feeling but that’s being the premise of the first half of every Harry Potter movie ever made. When this movie ends you feel like you’re halfway into a movie and the actual main plot can now be settled but instead of a conclusion, you’re presented with end credits and the promise of another movie.

Just thinking back on this movie and how the majority of its content wasn’t necessary for you to see. You have to cut away certain things in film adaptations and just focus on the crux of the matter but this movie is just an extravagant, bloated tease for the finale. Content wise, the end of this movie feels like the halfway point of a real movie. It’s my least favourite of the series and if you skip it, no harm’s done. 5/10