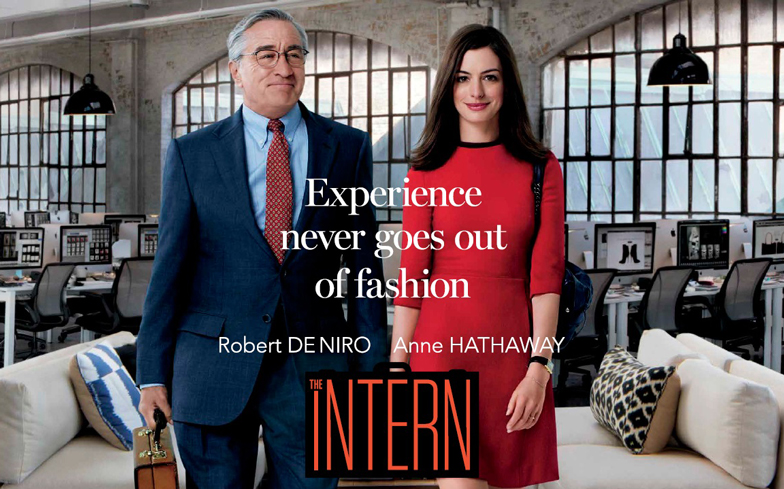 So I watched The Intern… 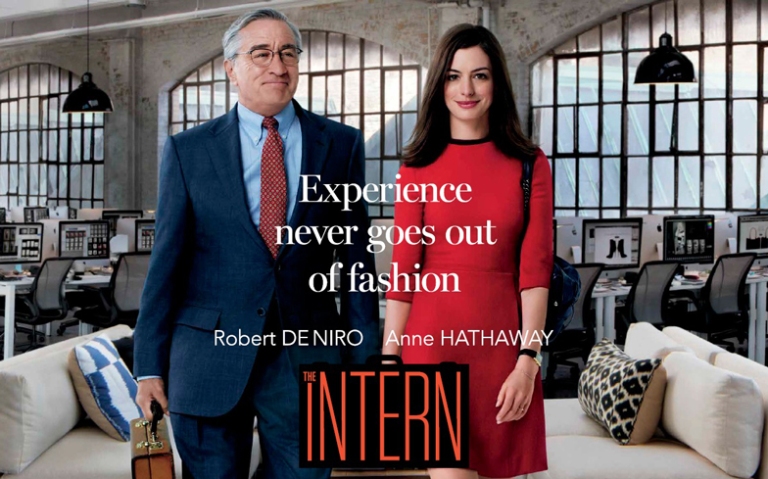 I was really looking forward to this movie – the trailer had excited me, the cast looked excellent and Nancy Meyers is one of my favourite filmmakers. Meyers has produced nothing but homeruns over the past two decades with movies like The Parent Trap, What Women Want, It’s Complicated, she’s incredibly talented and I would watch anything she’s involved in.

Okay, basic plot: Robert De Niro stars as Ben Whittaker, a seventy-year-old retiree and widower who is looking for something to fill up his life. Ben applies for an intern programme at the offices of an online fashion store run and founded by Jules Ostin (Anne Hathaway). Ben is assigned to be Jules’ intern and although an unlikely pairing at first, the two develop a friendship, with both finding something in the other that they desperately need. 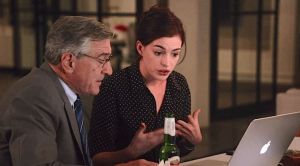 I have a thing for directors who are involved in the writing process of the films they produce – people like James Cameron, Christopher Nolan and Nancy Meyers. Being involved in these aspects of the films, I think, results in a more organic-feeling film. You aren’t trying to marry the vision of the screenwriter and the director because those visions are one and the same. This is one of the many reasons I love Nancy Meyers as a filmmaker. One of the other reasons (perhaps the main reason) is that she understands relationships, but more than that, she understands how to display relationships on film with heart, authenticity and entertainment. There are several parts in this movie that, if put in the hands of a lesser director, would have fallen flat. Fortunately, Meyers has a wonderful eye and instinct on how to best capture the emotional complexity of relationships. I don’t know if the gravity of this compliment is going to be fully understood but all her films look and feel clear. The colours on screen are sharp and feel natural, like they come from real life instead of some filter app on some guy’s laptop. This further adds to the warm and charming nature of her films because they feel inviting.

Another thing I love about Meyer’s films is that the cast is always top-notch. I don’t just mean top-notch in the sense of being composed of big names or credible actors, Meyers has an amazing ability to get the best out of whoever she’s working with. I don’t think she had to do much in this movie because the cast are absolutely amazing. Robert De Niro is an old pro; he has this swagger and old-timely charm that he brings to the character of Ben that is absolutely amazing. He makes you care about the character and from the very first second you’re rooting for him to win. Hathaway also does an amazing job alongside De Niro. We all know that she can do the quirky, off-centre, dorky but loveable character well and she nails it again in this movie. 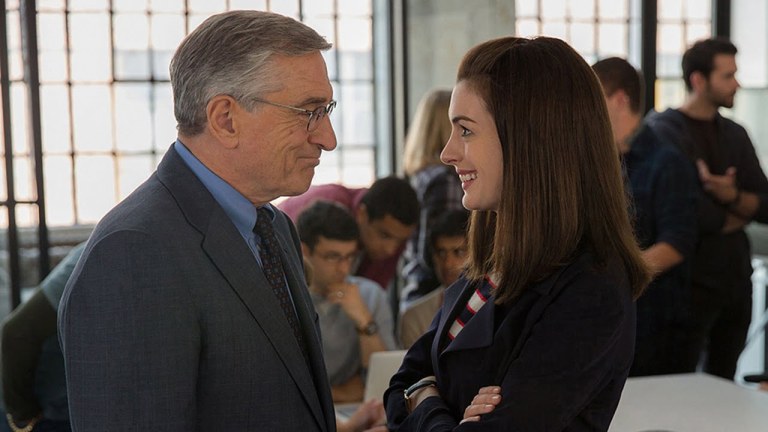 At the end of the day, this movie is a romantic comedy but instead of romance, it’s friendship that the two leads find in each other. There’s initially some resistance (as in all good romcoms) but as the movie progresses and the layers are peeled back, the two leads – Ben and Jules – “fall in love” and become friends. It’s a great “love” story with a real feel-good factor weaved into it. De Niro and Hathaway have amazing chemistry and really uphold the standard and tempo of the story. The supporting cast also put in amazing performances with Reno Russo, Adam DeVine and Zack Pearlman really impressing me.

This movie is, of course, really well-written and full of humour. I was laughing throughout the movie and came close to falling out of my chair during one of the comedic set-pieces. I don’t wanna spoil anything but let’s just say, you do not want Adam DeVine to be your getaway driver. I’m laughing all over again just thinking about it. Unfortunately, I think near the end the movie loses a bit of steam and just kind of glides to the finish line instead of stomping triumphantly, which it had been doing leading up to this.

Overall, The Intern is everything you’d expect from a Nancy Meyers movie: funny, heartfelt, genuine and full of charm. I walked in with high expectations and this movie did a great job meeting them. I felt so good after watching it and I hope you give it a chance and go watch it too. Another homerun for Meyers 7/10

7 thoughts on “The Intern Review”