So I watched Ayanda…

I think all members of a country have a patriotic obligation to support their country. It’s almost like being a parent whose toddler tells them that they’re going to be playing a tree in the school play. You have to go watch it, no matter what. That’s the situation right now with SA film. Don’t get me wrong, the majority of it is really very encouraging and a pleasure to watch but there a few stinkers. So I just want to prefix this review by saying that even though I didn’t like this movie, these are still just my personal opinions and not liking an SA film isn’t unpatriotic.

Okay, basic plot: Ayanda (Fulu Mugovhani) is a free spirit and restoration artist who specialises in creating art out of junk. Ayanda works out of the motor repair garage that her dad used to own before his death. Unfortunately, the garage is no longer turning a profit and her mom and uncle – Zama (Kenneth Nkosi) – think it’s time to cut their losses and sell the garage. Ayanda furiosly protests because the garage holds a special place in her heart because it reminds her of her late father. Ayanda is given  three months to turn the garage around or it will be sold. Using her unique eye for design and her carefree spirit, Ayanda sets upon the mission to keep the garage, and her father’s memory, alive. 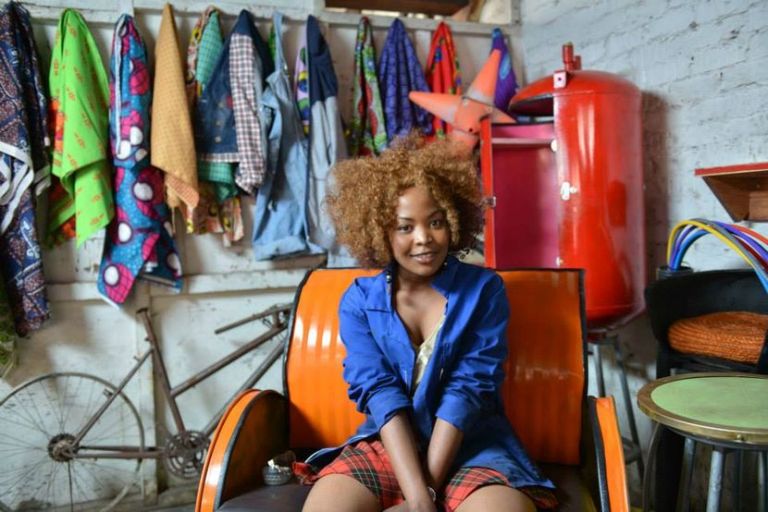 This movie’s story is told from two viewpoints. One follows Ayanda and her struggle to keep the garage afloat; the other is through a documentary that one of the characters in the film is producing about the ‘new Africa’ and its urban culture. Now the person making this documentary is never properly introduced, he’s not even a real character in this story; all we know about him is that he’s making this documentary and that he always finds himself in close proximity to Ayanda and the events in her life. Now this sparks three questions: 1. Why’s he making this documentary? 2. How’s it fit into the story and 3. Why’s he always so conveniently near Ayanda. After some thought I came up with an answer: I don’t know. Actually no, the real answer is I suspect it’s simply because the script said so, yup, I’m 100% sure it’s because the script said so.

I need you to understand how random the documentary aspect of this film is. The person making this documentary isn’t Ayanda’s friend, isn’t in love with Ayanda, he has no connection to the film at all. I get the use of the documentary  film style because in documentaries when people are interviewed they share personal stories which provide insight into their character. But because the director and screenwriter don’t link the documentary to anything else, it just seems like lazy filmmaking to provide character exposition without having to write scenes that convey this information. Another problem I had was that when the film would switch to this documentary style, the level of the sound decreased and the characters became barely audible. I have to think that this was a technical error from the cinema where I was watching it rather than the actual filmmakers just messing up so I won’t hold that against this movie (partly because there’s so many other things to hold against it).

This movie’s biggest problem is a lack of coherency. Each scene feels like it was written five minutes before they started shooting it. The scenes don’t flow into each other but rather feel like disjointed pieces of a jigsaw puzzle that are being forced together. The movie never gets going or decides what kind of style it wants to commit to. The movie also never has a clear source of tension and conflict. Ayanda wants to save the garage, her uncle wants to sell it (for ulterior motives, as we later learn) but the obstacles and forces keeping her from success are always external. By that I mean, the tension isn’t generated by characters in the movie but rather by random events. The characters don’t drive the story forward, the story drives the characters and that’s the problem.

There’s also major errors of continuity in this film. SPOILER ALERT. Ayanda’s garage is broken into and all the cars in it are stolen but then in the next scene, one of the cars that was stolen is magically back in the garage. One could argue that maybe the police retrieved and returned the car but it’s never explained on screen. This is what I mean by scenes not flowing into each other. It feels as if the events of the current scene completely disregard the events of the previous scene and this is an on-going theme in the movie. Long story short, this movie doesn’t feel well written or directed.

Ayanda is also far too long. It needed to twenty-five minutes shorter, at least. This movie technically isn’t that long but because it has such a discontinuous style, where elements are introduced but never developed or resolved, it feels like you’re constantly waiting for something to happen. This anticipation makes the movie drag and by the time the end-credits start, you’re so happy that you can go home. I remember when the movie ended, the girl sitting next to me (who I didn’t know) and I turned to each other and said, “wow, what a boring movie.”

This movie isn’t all bad though, it actually has some competent acting. Fulu Mugovhani does a good job as this film’s lead. Ntathi Moshesh who plays Ayanda’s mother probably did the best acting in this movie and was its emotional bedrock at times. The problem with this movie is its script and how poorly it treats its characters. This movie doesn’t actually have characters – it has plot devices, whose sole purpose it is to fill up space and help the plot get to its next point. Somewhere near the last twenty or so minutes, the movie becomes so insufferable and reaches a dead-end on one end of the spectrum that it does a 180 and starts being entertaining because you can now laugh at how horrible it is. I remember there was this one very serious scene near the end where Thomas Gumede’s character – Zungu – is giving Ayanda this emotionally-charged speech. It’s supposed to be this intensely somber and sobering moment but I burst out laughing. I had to. If I didn’t find something to enjoy in this movie, I was going to whip out my phone and start Googling arsenic recipes.

Overall, I didn’t enjoy this movie. The actors do the best they can but it isn’t well-crafted or written. I wouldn’t recommend watching it but South African cinema needs to be supported because without support there’s no hope of growth. So go watch this movie, not for the movie itself but the idea it’s trying to promote. 5/10 (it deserves less but it’s so bad that it’s good)