So I watched Gladiator…

It’s amazing how your opinions on a film can change with age. I’ve always enjoyed this film; but if you asked me what I liked about it the first time I saw it (back when I was fourteen/fifteen) and you asked me now, I doubt those two answers would be the same. I’ve definitely acquired a greater appreciation for the moments between fight scenes since then and – as a result – my reasons for enjoying this film have increased infinitely.

Okay, basic plot: Maximus (Russel Crowe) is a highly respected and skilled General in the Roman Empire. After his final victory in Germania, he hopes to return home to his wife and son and lead a quiet life. The current Emperor of Rome, though, has a different idea in mind for Maximus’ future. The Emperor is dying and doesn’t think his son, Commadus (Jaoquin Phoenix), will be a worthy successor. He plans to give Maximus power to rule over Rome but is killed before he can do so after Commadus learns of his father’s plan to rob him of his birthright. Maximus is sold into slavery and ends up becoming a gladiator. His skill in the arena take him back to Rome where he will not only face deadly opponents in the Coloseum but also defy an Empire.

So when I first watched this movie, I was really into the fight scenes and gladiator battles. I understood the politics behind it all but don’t think I properly appreciated the subtlety and skill with which they were handled. This is a film about revolution but not revolution through protest or marching but rather political-interplay to sway public opinion. The Emperor uses the gladiator games as a tool to distract, entertain and gain public favour. Maximus, as a gladiator, turns that tool against The Emperor by opposing him. As many characters in the film say, “Rome is The Mob!”; so control of the crowd translates to control of the entire nation. This film is actually a fantastic politic piece.

The entire film is wonderfully written and there are no wasted pieces of dialogue. Everything the characters say moves the plot forward or provides insight into their characters. I think my favourite character in this film is actually Commadus, even though he’s absolutely vile. He’s immoral, has an incestuous bond with his sister and is just a very unsettling character. I have every reason to hate this guy (and I do) but he’s so well-written and brought to life with such skill by Jaoquin Phoenix that he ends up being fascinating as much as repellent. That’s another great thing about this film – the open-ended way its characters can be interpreted. With the exception of Maximus – who’s the only character in this film who’s out-and-out good – the majority of the central characters in this film could be considered both good and evil depending on your view point.

Take Commadus’ sister, Lucilla, for example. She knows what Commadus is doing isn’t right but she needs to survive and protect her son, so she allows and encourages it in order to stay in his good graces. Morally wrong but would it not be more wrong to stand against her brother and risk her son’s life? These are questions that constantly get asked throughout this movie – your duty to do what is right versus your instinct to protect yourself. I enjoyed the way Connie Nielsen portrayed this struggle and think she did some of the best acting in this movie. But, honestly, everyone in this film puts in star-quality performances. Obviously Russel Crowe is the standout but people like Richard Harris, Jaoquin Phoenix, Connie Nielsen and Oliver Reed do exceptionally well too. This is the first film I saw Djimon Honsou in and I thought he would be the next big thing. He’s had a few leading roles here and there but, save for Blood Diamond, he’s never hit the level that I thought he was capable of. 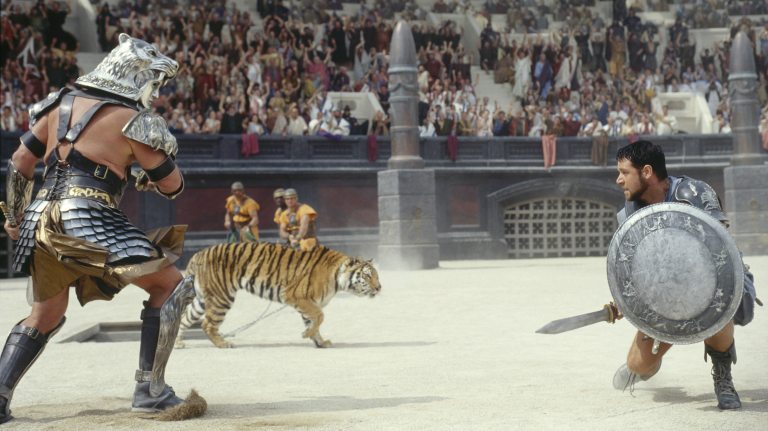 This is one of Ridley Scott’s finest films. A constant feature in his films is that of authenticity. Whether he’s tackling sci-fi or epic dramas, he fully immerses the viewer in the world he creates – you never doubt that what you’re seeing is real. A shortcoming though that I have to point out is the way he chooses to film the fight scenes. They’re too rapidly-edited or shot far too close. I just prefer stable, wide-angle shots so we can see everything and properly drink in the visual. I’ve mentioned this several times in my reviews and will continue to harp on it until directors give us action-sequences where we can actually see what’s going on.

Overall, Gladiator is a beautifully crafted political epic drama with moments of action thrown in for good measure. It’s well-paced, entertaining and will have leave you thinking. It’s full of memorable pieces of dialogue and superb acting that brings the dialogue to life. A true classic