So I watched When Harry Met Sally…

I’ve always been somewhat of a hopeless romantic; which is why romcoms are so appealing to me. Yes, they can be sappy and cheesy but often they offer guidelines for navigating social interactions. I’m not joking when I say that the foundation of my approach to relationships has, in part, being formed by lessons learned from pieces of film like this.

Okay, basic plot: Harry Burns (Billy Crystal) meets Sally Albrigt (Meg Ryan) during a cross country trip from Chicago to New York. During the trip Harry makes several bold statements about relationships which shock and offend Sally, one of which is the fact that “men and women can’t be friends”. They part ways resolving not to be friends but over the course of the next ten years they sporadically run into each other. On one such occasion – directly following Harry’s divorce and Sally’s breakup – they decide to become friends and comfort each other through their respective heartbreak. The two develop a strong bond and become very good friends, disproving Harry’s original ideas about men and women being unable to just be friends. However, their growing friendship soon proves Harry right. 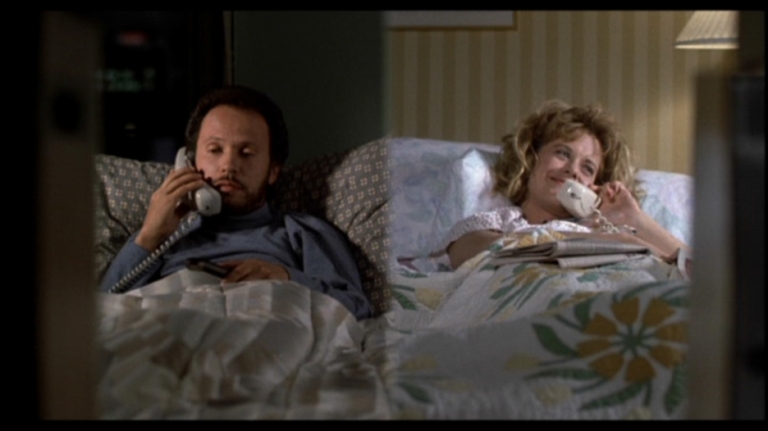 A common thread that has been present in all of these Classic Movies that I’ve been reviewing lately is that of timelessness. Timelessness not only in how the films are presented but also in what they chose to present. The themes explored in When Harry Met Sally are as relevant today as they were twenty-seven years ago. The ideas of friendship between opposite sexes, heartbreak, betrayal, unexpected love are issues that I discuss with my friends on a daily basis. I’ve had good female friends – some of them even best friends – who have come to odds with the women I’ve dated because of the notion that sex always complicates friendships between men and women. This is a topic that will most likely never end and this is one of the best movies to discuss it.

That’s probably my favourite feature about this movie – its intelligent script. I said earlier that romcoms can often serve as educative material regarding relationships and Nora Ephron’s script is a fantastic example of this. Since Harry and Sally are just friends and date other people throughout the course of the film we get to see the experiences of the dating world from the viewpoints of both sexes. But since Harry and Sally also have this intimate relationship, we also get to see the opinion of the opposite sex on the experiences of the other. So we get to see the differences in the way men and women date but also what men and women think of each other’s varying approaches to love and dating. A great example of this is – perhaps this movie’s most famous scene – where Harry and Sally are discussing women faking orgasms. Harry repeatedly states that he’d know if a women faked it and Sally vehemently retorts that he wouldn’t and to prove this, Sally fakes an orgasm in the middle of the restaurant they’re currently having lunch in.

On the surface it’s just a funny scene; but the beauty of the scene is the beauty of the movie. The juxtaposition and analysis of the differences between men and women that having the two central characters be friends before they fall in love provides. Speaking of central characters, Harry and Sally have to be two of my all-time favourite romcom characters. This is largely due to the rich writing that created them but I would be amiss if I didn’t praise the superb acting that brings them to life. Meg Ryan is the undisputed Queen of Romcoms and her portrayal of Sally (which was her first leading role) shows why. Ryan has a fantastic charm and aura of strength that she brings to her characters. She never feels like a damsel-in-distress waiting to be saved by the male lead but rather a self-sufficient women who chooses to have a partner. Her co-star Billy Crystal is no slouch either. Crystal’s wit and sarcasm is a thing of beauty and his ability to function at what seems like a million-jokes-a-minute adds great humour and heart to his character.

Carrie Fisher has a supporting role in this film as Sally’s best friend, Marie. Her acting is fine and I enjoyed seeing her but it was a bit of a shock seeing her without Luke Skywalker and Han Solo. I actually didn’t even know she made movies outside of Star Wars. The film also features random interviews with couples explaining how they met. I loved this because all of the couples stories had an element of unexpected love which reflected the tone of the movie perfectly. It was also a great way to transition between different time periods.

Overall, When Harry Met Sally is one of the best romcoms ever put to film. It’s funny, has two amazing leads at its helm and has as much information to share as charm. It’s worth watching whether alone or with a partner.