So I watched Exodus: Gods and Kings…

This movie is unnecessarily long. In much the same way that Moses begs Rameses to release his people, the length of this movie will have you begging Ridley Scott to release you.

Okay, basic plot: um…do I really need to do this? Okay fine, Christian Bale is Moses, a member of the royal Egyptian family, who finds out that he is actually Hebrew and, therefore, technically a slave. After been banished from Egypt, Moses starts over, finds a wife, has a kid and then God comes a-knocking and gives Moses a mission to free his people that will have you sitting in a cinema for almost THREE HOURS.

Look, I don’t have a problem with a movie being over two hours, granted that the story demands and justifies the length AND that it has enough entertainment value to keep you interested. This movie definitely doesn’t have the entertainment value to warrant its excessive run time. I feel like certain directors (Christopher Nolan, Martin Scorsese and, in this case, Ridley Scott) feel obligated to make all of their movies over two hours. Don’t get me wrong, these directors have certainly earned the right to make such long movies because their movies are usually amazing and complex and deserve the extended run time. BUT, that being said, not every single movie needs to be so long. Exodus, is certainly one of those movies.

I actually can’t even begin describing what I liked about this movie because its length just completely dilutes any quality the film had. There were several occasions were I was left thinking, “why is this movie so long? Did that scene really need to be ten minutes? When is this going to end?” and because I know the story and how it ends, the movie just felt like it was dragging and going nowhere slowly at times. 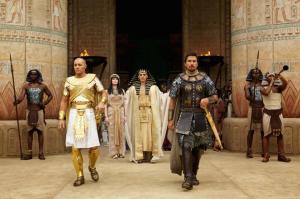 But length aside, this movie is actually quite enjoyable. Christian Bale and Joel Edgerton put in some absolutely brilliant performances as Moses and Rameses, respectively. I felt their sibling rivalry was an underutilised plot point and that Edgerton, in particular, didn’t receive the screen time his enthralling portrayal of Rameses ‘The Great’ deserved.

Instead the director spends an inordinate amount of time focusing on the twelve plagues that befall Egypt. I know this is a big part of the story and they did deserve to be shown on a grand scale but I felt the director chose special effects over character development and never really knew what story he wanted to tell. This movie feels schizophrenic at times. It starts out as an action-packed period piece, similar to Scott’s Gladiator then it becomes a religion piece then it becomes a CGI-filled blur then it goes back to religious then it just kinda ends. I understand that this is a complex story that spans many years but it feels like Scott is trying to give you too much actually. He wants to stuff all these plot points and all these special effects into one film and you end up not getting the full experience of any element of the film because there’s always too much trying to happen at once.

My favourite parts of this film were when the main characters are interacting with each other. When Moses is trying to reason with Rameses or when God and Moses are talking to each other. I loved these scenes because they are filled with great acting and so much soul and I wish that these moments had being the focus of the film. I know that we need to be shown the plagues and The Red Sea needs to part but I felt that the actors did such good work and they really deserved this movie to be moved forward by them instead of CGI effects of frogs and locusts. 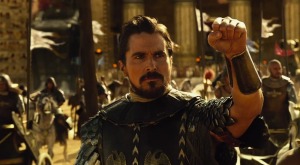 I really enjoyed the stance this movie took on telling the biblical story. It stays very true to the source material without feeling like a bible study movie. I think Ridley Scott does a much better job of telling this story than Darren Aronofsky did with Noah. I particularly enjoyed the way Exodus depicts God. I don’t want to spoil anything but God really feels like a character in this movie. He isn’t some omnipotent being high in the sky free of the world, He feels real and the actor they chose to portray him was a stroke of genius. As I said before, watching Him and Moses speak was one of the highlights of this movie.

Overall, I enjoyed this movie but really wish it had a shorter run time. It’s beautifully shot and like all other Ridley Scott films, it has amazing cinematography and a breathtaking score. If you aren’t a fan of long movies then I’d give this one a miss but if you’re one who can go the distance I’d suggest seeing this movie just for the acting because it’s phenomenal. I’m not sure how religious people are going to receive this film but I really liked it and felt it was more of an epic drama than a religious film. 6/10