So I watched Focus…

I walked into this movie with somewhat high hopes. The trailer hadn’t blown my mind but I was excited to see Will Smith play a charismatic character again and, we all know, how great it is to look at Margot Robbie.

Okay, so basic plot: Will Smith is Nicky, a highly experienced conman who comes from a family of con artists and has always been taught that there’s no place for love or heart in his line of work. He takes Jess (Robbie) under his wing and teaches her the tricks of the trade. Now if you’ve ever watched a movie before and/or have a brain, you can already see where this is going. 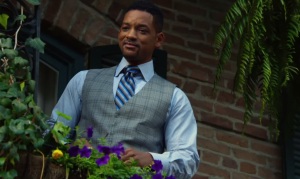 The best thing about this movie has to be Will Smith. Wow, I was starting to think I’d never say that again. After watching MIB III and After Earth, I was starting to think that Will Smith had lost all his star power and charisma. Luckily, the reports about the death of Smith’s movie career were premature. I loved him in this movie. It’s a throwback to the Will Smith we all know and love. He’s charming, a little bit arrogant and shows that he still has some of those comedic chops.

Unfortunately the one thing Smith doesn’t have in this movie is an amazing script and director. This movie has a mountain of underutilised potential and could have been a really amazing crime dramedy if it had just tried a little bit harder. It suffers from the same problem American Hustle did – it dedicates the majority of its runtime to the relationship between the leads instead of the crimes they’re committing. I realise that the relationship between the characters is important but this movie isn’t a romcom, it’s supposed to be about conmen and how they hustle people but that aspect of the movie gets shown the smallest amount of attention possible. The other problem I had with Nicky and Jess’ relationship being the focus of this movie was that I didn’t buy into their apparent ‘love’ for one another. They know each other for barely a week and I’m supposed to believe that they have this amazing, undeniable love? Come on.

But anyway, back to the good, Margot Robbie is also really good in this movie. She’s unbelievably hot, yes, but she also shows off her acting skills and range in this piece. She’s not going to win an Oscar or anything for this but she’s definitely worth a watch. One of the real stars of this movie is Adrian Martinez who plays Farhad – one of the members of Nicky’s crew. He’s absolutely hilarious and his direct, politically incorrect humour really injected some life into this movie when it was threatening to roll over and die. Farhad was definitely an underutilised character and this movie needed a lot more of his humour.

It’s pretty difficult to give this movie a proper review because I don’t want to spoil the twists and turns. It follows the same formula The Oceans Trilogy had, in that, throughout the entire movie they tell you that a + b = c and then at the very end, when it seems like the plan has completely failed they reveal that actually x + p = c and your mind is blown. Unfortunately this movie doesn’t really blow your mind. This movie also sacrifices logic and what could have been a good story to fit these “twists” in. Stop trying to shock me and entertain me!  Some of the crimes are slick and really well thought out but the majority of them are things you imagine pickpockets do, not professional conmen.

Overall, this movie isn’t what it was billed up to be. I expected a slick look into the lives of professional conmen and, instead, was given a bloated love story that I didn’t give a sh*t about. Will Smith still has it though and if this movie flops, it won’t be his fault. Not worth a trip to the cinema but worth a watch on a lazy day. 6/10

One thought on “Focus Review”