So I watched Woman In Gold…

Tales about World War II and the injustices committed by The Nazi’s aren’t uncommon. There are movies, books, documentaries, it’s even part of some school curricula and because of this, I’ve always had a generalized, faceless appreciation of this horrible time in our planet’s history. I think the habit, when one thinks about such times, is to immediately switch thoughts to The Holocaust and the millions of Jewish people who lost their lives but you never think about the Jewish people who survived and the hell they had to go through. That’s what this movie does so well, it focuses the accumulative pain and tragedy of that time into one story and tells a side of the story we don’t often here.

Okay, basic plot: Maria Altman (Helen Mirren) is an elderly Austrian woman who wishes to reclaim a series of family possessions that were taken from her family by The Nazi’s during their occupation of Austria. One of these possessions is a famous painting by Gustav Klimt – Woman In Gold. The painting is of her late aunt Adele and is currently housed in an museum in Vienna. In her quest to reclaim the artwork, Maria enlists the help of Randy Schoenberg (Ryan Reynolds), an inexperienced lawyer who is the son of a family friend. Together the two of them begin a legal battle not only against the museum but the entire Austrian government. 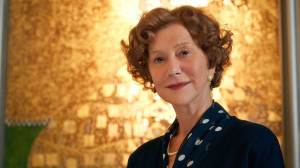 I loved this movie. The story is harrowing, poignant and powerful; but it still needed proper writing, direction and acting to bring it to life and this movie has these qualities in abundance. Helen Mirren is a class act! There are so many little characteristics and mannerisms that she brings to the character that make her concrete. She has this regal elegance and wears the pain and struggle that her character has gone through in every action. I love seeing this kind of commitment and only the truly great actors have this undeniable devotion necessary to translate words in a script into a living, breathing character that you can connect to. Ryan Reynolds pleasantly surprised me with the level of his acting in this movie. I think Reynolds is in the middle of a renaissance of his career and if he keeps churning out performances the quality of this one, I think he’ll be set to be the Hollywood heavyweight that his potential has always promised. Daniel Brühl has a minor supporting role in this movie and I have to say the more I see of Brühl, the more I like him. 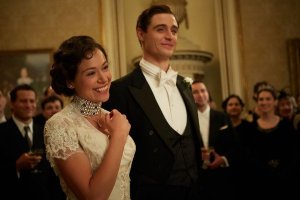 I love how deliberately paced this movie is. I guess that’s the beauty of arthouse movies – they don’t need to conform to the standard sensationalist style of a mainstream Hollywood movie.  They’re allowed to be more composed and patient in there storytelling and this usually leads to a movie that manages to properly showcase the heart and soul of the story being told. This movie’s story is told half in the present and half through a series of flashbacks that show Maria’s childhood and her escape from Vienna. I think the flashbacks are where the movie really shines and Tatiana Maslany who plays the young Maria is the real star of this movie. She’s the best actor in this movie and that’s saying a lot with a movie with Helen Mirren in it. It feels like her and Mirren actually sat down and crafted this character’s identity together because you can see that there’s a familiar spirit between the younger and older version of Maria.

This movie also has a very wonderfully written script that’s also unbelievably honest at times. This script addresses issues such as the fact that not everyone was necessarily against The Nazi’s, not everyone was a Nazi victim and the fact that some people can’t admit what they did wrong because, as Maria so eloquently puts it, “if they admit one thing, they’ll have to admit everything they did.” These issues were handled with great subtlety and the focus was on Maria and trying to get justice for the crimes perpetrated against her and her family but their inclusion made for great subplots and interesting points to ponder over.

Overall, this movie is a delight. It brought me to tears in some moments and moved me in a way that I didn’t expect. It’s a great story and one that deserved to be told. 8/10