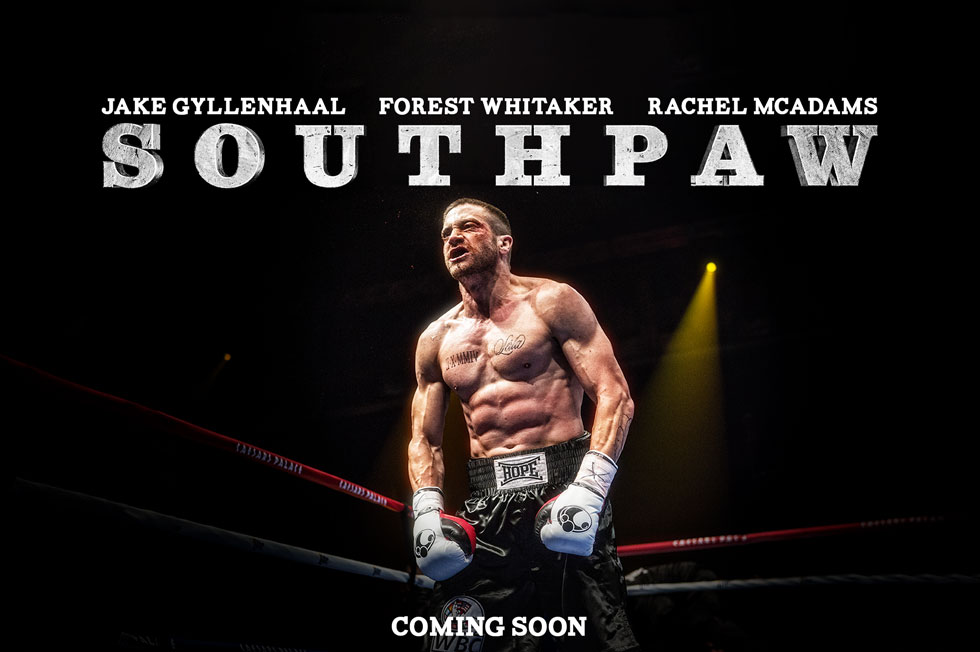 So I watched Southpaw…

I was really looking forward to watching this movie. I think Antoine Fuqua is one of the best directors working in Hollywood today and Jake Gyllenhaal is an amazing actor who often doesn’t get the credit he deserves. And while this movie isn’t as awesome as I thought it would be, it’s still a pretty entertaining watch.

Okay, basic plot: Jake Gyllenhall stars as BIlly “The Great” Hope – a professional boxer with a perfect record, a loving wife and daughter. When Billy’s wife suddenly dies, he loses his fortune, his championship and custody of his daughter. Billy must now embark on a mission to not only regain his championship but also his daughter. It’s basically Rocky III meets Rocky V meets Over The Top.

I joke about this movie being extremely similar to Rocky but I mean that as a huge compliment. The beauty of boxing movies is that often the opponent the fighter has to beat isn’t another boxer but rather his inner-demons. The fighting is a form of catharsis and seeing the journey the character has to make – both mentally and physically – makes for a really powerful story. Billy Hope is a rash, hot-headed brawler who relies on brute force rather than technical skill to win his fights. This attitude spills over into his personal life and he tends to make decisions without truly considering their consequences and this leads to him losing custody of his daughter. He literally hits rock-bottom with all his friends, his trainer, everything he holds dear abandoning him and he needs to pick himself up and evolve not only his fighting style; but also his overall outlook on life in order to get his life back in order.

Jake Gyllenhaal does an amazing job bringing this character to life. The physical transformation Gyllenhaal makes for this performance is obvious but the heart and the spirit that he brought to this role are what truly make it memorable. Gyllenhaal is a true chameleon – every role he steps into he fully commits to the character and the transformation necessary to portray them. His mannerisms, his speech, the look in his eye; everything about the character feels genuine and you can tell the amount of time Gyllenhaal took in crafting the persona of Billy Hope.I don’t think this perfomance is exactly Oscar worthy but it definitely is a great showcase of acting from Gyllenhaal.

Another actor who did great work in this movie is Oona Laurence who plays Leila Hope – Billy’s daughter. The chemistry that her and Gyllenhaal had was amazing and I fully believed that they were father and daughter. There are a plethora of poignant moments between the two that had me teary-eyed. Their relationship is the foundation for this story and everything that Billy does to improve himself is imbued with the love that he has for Leila. Rachel McAdams is also in this movie (albeit briefly) as Maureen – Billy’s wife. McAdams is a really talented actress and she does a great job with the limited screentime she has in this movie; so it baffles me why she isn’t a leading lady yet. I think she has all the qualities needed to win an Oscar one day but she just isn’t reaching the level I think she should be.

The thing I really love about Antoine Fuqua’s movies and his style is how much time he devotes to setting up the characters and the story. Things build up slowly and we get time to properly establish connections with the characters so that when things go wrong, we’re fully invested. He also makes use of some daring camera work in this movie with regards to how the boxing matches and punches are filmed. The choreography of the fights feel very natural and I was on the edge of my seat for some of those punches. This movie also avoids certain clichés and actually surprised me in certain moments, particularly towards the end of the movie.

Oh, Forest Whitaker is in this movie and while I think he is a good actor, he just isn’t amazing. He does the job and while his performance is above average, it isn’t going to make your toes curl or anything. A thing that might make your toes curl (but not in a good way) is 50 Cent’s acting. He plays an integral character to this movie’s plot who was supposed to stir up a host of emotions; but 50’s acting didn’t evoke a single feeling from me. He says his lines, he does his part but he’s nowhere near the quality of Gyllenhaal or Whitaker and he actually just brings the quality of certain scenes down.

Overall, Southpaw is one of the best boxing movies I’ve ever seen. Gyllenhaal puts in a powerful performance and this coupled with Fuqua’s patient storytelling and innovative camera work makes this a movie worth seeing. 8/10