So I watched Harry Potter and the Deathly Hallows Part II… 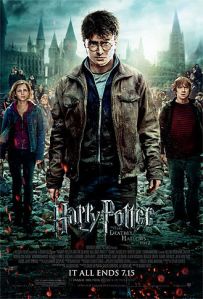 There’s always something great about reaching the finale of a series of movies. The culmination of the story, the ending of the journey, it’s just a special experience. Even more so when you consider the length and scale of Harry Potter. Ten years and seven movies had led up to this point. For the most part, this movie does a great jobbing wrapping things up and is definitely one of the best Harry Potter movies.

Okay, basic plot: you know how Deathly Hallows Part I was only half a movie? Well, here’s the other half. Harry, Ron and Hermione are nearing the end of their quest to find the remaining Horcruxes and destroy Voldemort once and for all. The group must once again return to Hogwarts where Snape is now Headmaster. The school and its grounds will form the battleground for the final showdown between the boy who lived and you know who.

I really liked watching this movie, more than I did the first time I think. There’s a feeling of resolution in everything that happens. We get to see old characters from the series and everyone is more mature and wears the weight of the peril they find themselves in well. This is the great thing about finales, seeing how different the characters are from when we first met them and how much the story has impacted who they are. It’s also such a great thing that there were so few casting changes and that the members of the cast were so humble about screen time.

I also really liked the plot of this movie. When we first learn, in Half-Blood Prince, that Voldemort created Horcruxes to preserve his soul and make himself immortal, an interesting idea came into my head – what if Harry is a horcrux? What if the only way to defeat Voldemort is for Harry to sacrifice himself and die?  And so it turned out that Harry was indeed a horcrux and he did need to die. I wish J.K. Rowling had, had the nerve and conviction to kill Harry off permanently. It would have added so much depth and meaningfulness to the story; but instead she half-assed it.

The Battle of Hogwarts is one of my favourite parts of this movie but I wish we could have seen more of it. We see passing glances of it as the camera follows Harry, Ron and Hermione as they run through it but we never really get a proper look at the intense action happening around them. This is the moment that seven movies had been preparing us for and instead of it earning the cinematography and focus it deserves, it’s reduced to a backdrop. You split this movie into two because you wanted to give each half of the story maximum focus but then you shift the focus to unnecessary scenes of Harry running and talking; so what was the point?

I still have a problem with Ralph Fiennes’ Voldemort. He isn’t menacing or frightening at all. He’s constantly cracking jokes and failing to justify the intense, at times irrational, fear the wizarding world has for him. I found the performances of Christian Coulson and Frank Dillane who both played adolescent versions of Voldemort in Chamber of Secrets and Half-Blood Prince, respectively, much more compelling, Fiennes fails to inject any wonder or memorability into the character and this diluted the grandeur of the showdown between Voldemort and Harry.

Overall, I really enjoy this movie. It has the grand scale and closure that you expect from a finale. The focus could have been better placed but the movie still functions extremely well. It taps into your nostalgia and delivers a worthy end to a story that’s helped form one of the biggest franchise in movie history. 8/10