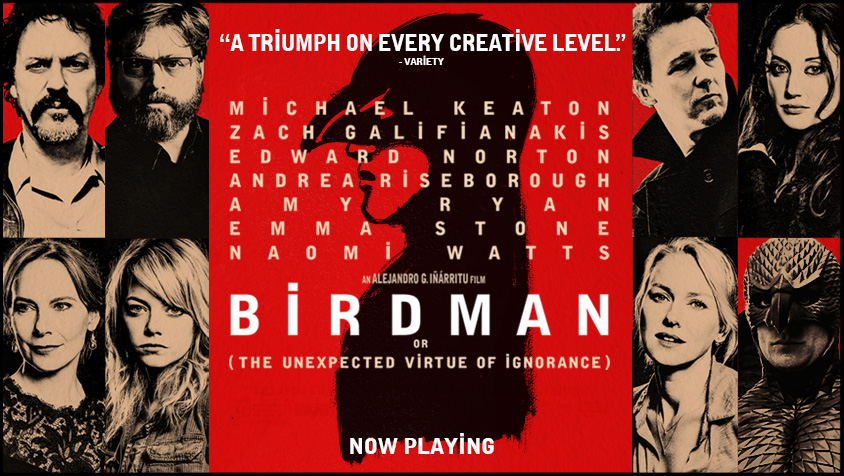 So I watched Birdman… 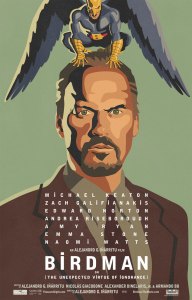 You know how there are always those movies that everybody says, “oh you have to watch this, it’s the best movie ever” and then when you watch it you’re just like, “meh”. This is one of those movies for me.

Okay, basic plot: Riggan Thomson (Michael Keaton) is a washed-up Hollywood star who achieved substantial success playing a superhero in the 80’s (sound familiar).Thomson’s career and life has never really achieved the heights he hoped he would and in an attempt to regain some stardom and the respect of his peers and audience, he decides to star and direct in a play – to show everyone that he’s a “serious” actor. So basically, it’s the movie version of Michael Keaton’s life. 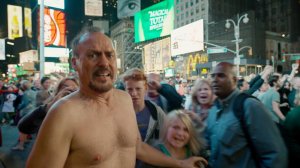 I joke about it but this movie’s self-awareness is one of its best assets. The movie knows that it’s a movie and knows it lives in the pop-culture sphere of Hollywood and takes jabs at the current state of film and entertainment. There are parts of the movie where the plot slows down and things feel a little boring then a character will say that people don’t want long, deep movies anymore, they want explosions and then randomly something will blow up. One of the things that make this movie so entertaining is that it’s a social commentary on the attention span of society and what we’re looking for in our entertainment. From the copious amounts of reality tv to the saturation of film with superhero movies, Birdman addresses the attitude of society through its characters and lands some pretty telling blows.

If I had to describe this movie to someone who’s never seen it, I’d probably say it’s a movie about the making of a play that’s actually a movie that’s actually a play. I love how intertwined the elements of the play that’s being produced are with the plot outside of the play. Thomson’s character in the play is very similar to him – both wanting to be loved and praised and respected; and both failing to get what they truly desire. This adds so much depth to this character because you feel like you’re getting twice as much exposition and insight. Michael Keaton’s performance is also quite enjoyable and feels very natural. It feels like you’re watching a segment in Keaton’s life and not just a movie because of the ease and precision inf Keaton’s portrayal.

Another thing that was great about this movie (probably the number one thing that people rant about when praising the movie) is the way it was shot. This movie has no establishing shots, there are no breaks in between scenes – it’s one long flowing shot. So if a character leaves a room, the camera follows them and if they interact with another character, the camera will switch to the other character and then follow them. It’s one long shot and it’s definitely something I haven’t seen before. You have to give director – Alejandro G. Iñárritu – praise for this novel approach to filmmaking and also the actors for being able to deliver their lines without any breaks.. This use of one long-tracking shot also makes this movie feel like a play because there are no second takes, every actor had to hit their mark for the scene to continue. 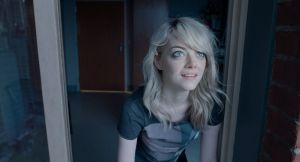 Now I’ve been heaping praise on this movie so you may be wondering, why I was “meh” about this movie? It’s the actor’s performances – they’re pretty substandard. Let me qualify that, when I say ‘substandard’, I don’t mean ‘bad’. I merely mean that with a cast with the likes of Emma Stone and Edward Norton, I’m expecting to be blown away. I’m expecting to see acting that is of genius-level but the acting in this movie is just a bit over average and that’s disappointing. I don’t think (with the exception of Keaton) that any member of this cast deserved an Oscar nomination. It’s standard acting and I think that the praise for this movie’s inventive style and daring story spilled over into praise for its acting.

Also, while I loved the long-tracking shot, it exhausted me. You underestimate the time that establishing shots and cuts to different locations allow your brain to reset. I think you need this time to reset. You literally cannot look away from the screen for a moment because you’ll miss something.Sure, this makes the movie more engaging but it also makes it more labour-intensive. This movie also needed a 20 minute haircut on its runtime. There was a point where I was wishing, willing this movie to end. The story had been told, all the tension was out but it carried on and I really started to resent it.

Overall, Birdman is an amazing movie, probably a future classic for its direction and self-awareness but it’s far too long and the acting is severely over-hyped. It’s worth a watch but I don’t think it’s this untouchable masterpiece that everybody claims. 7/10