So I watched Hotel Transylvania 2…

I think I judged this movie (and its predecessor) far too prematurely and harshly. Hotel Transylvania 1 and 2 are a lot better than I thought they would be and although not the best animated films ever, they definitely are entertaining and worth a few laughs.

Okay, basic plot: Five years after first meeting, Johnny and Mavis are happily married with a little boy named Dennis. The whole family still live with Drac at the hotel. Drac has high hopes that Dennis will continue the Dracula bloodline but becomes increasingly disheartened when Dennis doesn’t show any vampire characteristics. Mavis thinks that maybe Dennis is just a regular human boy and not a vampire and that her and Johnny need to move away from Transylvania and live in a human suburb so that Dennis can feel more normal. Drac must, once again, try to convince Mavis to stay at the hotel and his only hope of doing this is by helping, in fact forcing Dennis’ inner vampire out. 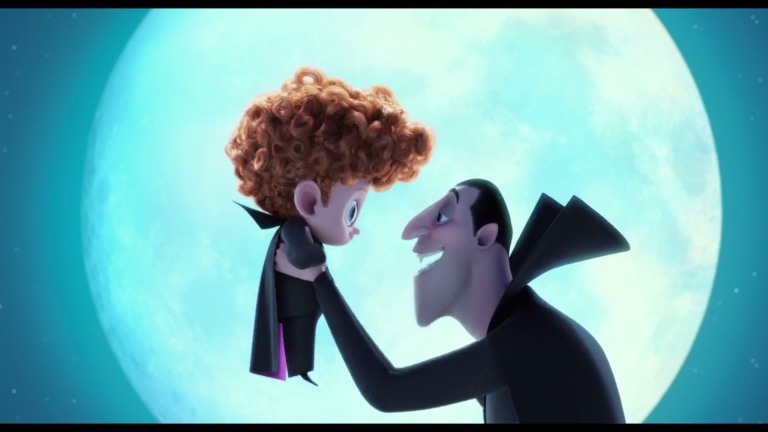 This movie’s plot is pretty similar to the original. At the heart of it, it’s still a film about overprotective parents who aren’t willing to give their children the necessary freedom they need to grow. There are several other elements that are recycled from the original but I think they’re handled with a lot more insight and thought than they were in the first. The first movie felt like it was completely aimed at kids; this movie broadens its scope and adds something for the more mature audience. Adam Sandler joins the screenwriting team for this movie, replacing Peter Baynham, and you definitely pick up his signature comedic style in this movie’s jokes. I know Adam Sandler isn’t everyone’s cup of tea but I think he’s quite the funny guy and although he’s struck out in the recent past, he still has something to offer the world of comedy.

This movie’s script reaches further than the original and leaves the confines of the hotel and shows us how monsters and humans now interact. We meet Johnny’s parents and family and the exchanges between them (especially Johnny’s mother) and Drac are really quite funny and entertaining. This movie also manages to deliver its moral with a lot more subtlety and finesse than the original. I was actually brought to tears near the end of this movie but I am a softie so almost everything brings me to tears these days.

The theatre I watched this in was filled with a gaggle of pre-adolescent girls and you it was clearly evident that they enjoyed this movie. There’s a dance party, as in the original, at the end of the movie and all the girls in the theatre stood up and rushed to the front of the cinema and danced along with the characters on screen. It was a really fun moment to witness and just embodied the silliness and fun this movie was aiming for. I had a lot of fun watching this movie and I probably laughed a lot louder and more often than the actual kids this movie was made for.

The voice acting in this movie is once again superbly done. Adam Sandler shines as Dracula with Selena Gomez doing a great job as Mavis. I love Gomez in this role but as with the original, I can’t help half-wishing that Rihanna had voiced this character. The additions of Nick Offerman and Megan Mullally as Johnny’s parents also raises the bar of acting in this movie. I really did enjoy everybody’s acting and listing everyone I liked would just lead to me listing the whole cast.

Overall, Hotel Transylvania 2 is a definite improvement on the original. It dreams bigger and has a larger scope and offers something for both the younger and more mature members of its audience. Adam Sandler’s contribution to the script is tangible and I believe is the main reason for the film’s improvement. It’s worth a watch for you and your kids. 7/10