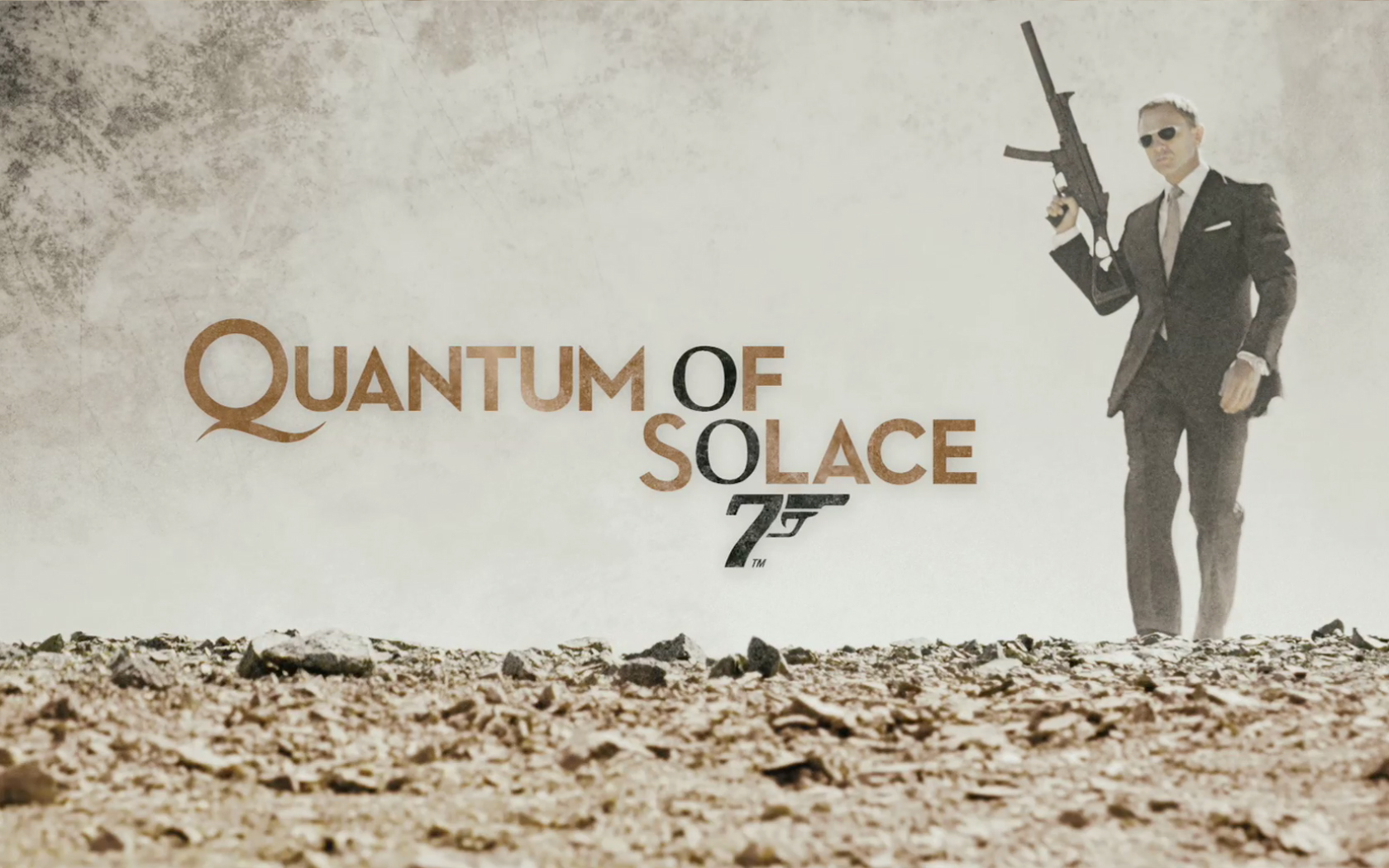 So I watched Quantum of Solace…

This Bond film tries to do what no Bond film before it (or at least none that I remember has ever done) – it tries to introduce continuity into the series. This film is a direct continuation of the previous film – Casino Royale – instead of a self-contained story. I appreciate the filmmakers trying to do something different but some aspects of Bond really don’t need changing.

Okay, basic plot: Bond (Daniel Craig) is busy investigating the organisation that was behind Vesper’s (Bond’s love interest in the previous film, in case you forgot like me) betrayal of him. His investigation leads him to Haiti where he encounters a woman named Camille Montes (Olga Kurylenko) who is also out on a mission of vengeance against this secret organisation. The two pair up, hoping that their respective quests for revenge will bring them freedom from their past.

There’s an unwritten code of conduct when it comes to Bond films; and that code states that the only characters of real consequence are Bond, M, Q and Moneypenny – everyone else is dispensable.  There may be a memorable villain here and there or a Bond Girl whose nonsensical name or beautiful body deserves a second thought but usually any specific details about the plot can be erased by the time the closing credits begin. This isn’t an insult to Bond films – they are an institution in film but to try to remember every specific detail about every film would be pointless because of the ever-changing quality of the character.

So the first time I watched this film I was extremely confused because I had deleted the Bond Girls and plot specifics of the previous film from my memory. Now this turned out to be a giant problem because this film’s entire plot is predicated on the events of Casino Royale. So throughout my initial watching of this film I was thinking, “who’s Vesper and why does Bond want revenge for her?”; “um what did this Mathis guy do to Bond again?”; “oh yeah, there’s that Felix guy, he was CIA right?”. I don’t have a memory problem, I’ve just been programmed by decades of Bond films to not retain any of this information. I wish this film had had a two minute montage where it recapped the events of the previous film so I could gain my bearings.

While not remembering the events of the previous film was a challenge to my enjoyment of this film, it wasn’t my biggest problem. My biggest problem was the film’s plot is rather hard to follow; not because the plot is complicated but rather because it’s so dull. This film is boring. Everything in it, from the acting to the action sequences, is done at half-pace. This film’s script is so incredibly bland and I’m shocked that the screenwriters who wrote Casino Royale also wrote this film. I mean, Casino Royale wasn’t anything sensational in terms of plot but it felt like they at least understood the spirit of Bond in that film. In this film they are so obsessed with changing the character that they completely lose his essence.

Bond is apologetic and whimpering in this film and I understand that this film’s purpose was to show how devastated and broken he is after losing his one true love, Vesper (who he knew for a week, maybe a week and half) but they go too far and completely strip him of all his swagger. In my review of Casino Royale I said it  was the most un-James-Bond-like James Bond film but Quantum of Solace isn’t even a James Bond film. It isn’t fun. It isn’t cool. It’s just a half-assed attempt at a James Bond parody. Honestly, I hated watching this movie.

There’s also a change in director from Casino Royale with Marc Foster replacing Martin Campbell. I’d actually like to amend what I said earlier, Foster is my biggest problem with this movie. I think he’s a good director, I’ve enjoyed other films he’s directed, things like, Monster’s Ball, Stranger Than Fiction, The Kite Runner, World War Z but the man needs to stay away from action movies.

Every action sequence in this film is improperly shot. What’s the point of putting a car chase in a movie if you’re just going to show me shots of the driver turning the steering wheel? I need wide expansive shots so I can see who’s chasing whom and what they’re dodging and hitting. Also how about a nice long tracking shot so I can actually appreciate the co-ordination and choreography that’s been put into these sequences by the stunt team? This isn’t just a problem in action scenes, almost every scene in this film is too tightly shot or too rapidly edited.

I don’t understand the point of investing millions into creating a scene, applying for permits and licences to shut down streets and blow up buildings and then you don’t properly showcase it. What’s the point then? Foster, along with the screenwriters, treats this like it’s a Sandra Bullock romcom instead of a James Bond action-spy film. It’s truly infuriating.

Another infuriating aspect of the film is that they chose Olga Kurylenko – a Ukrainian actress – to portray Camille Montes, a Bolivian character. I don’t know what was more annoying – her clearly sprayed-on tan or the heavy Ukrainian accent that she tried to peddle off as South American? This movie is just a mess.

Overall, Quantum of Solace is excruciatingly difficult to watch. It’s an over-correction of Bond that I don’t think he needed. The whole film doesn’t feel well-crafted and is missing so many of the essential James Bond qualities that we’ve come to expect. There’s absolutely no reason to watch this movie. 3/10