In honour of Black History Month, Dell On Movies is hosting a blogathon celebrating black excellence in film. Now if you don’t know what a blogathon is, it’s basically a bunch of bloggers creating posts around a specific subject during a specific period. For this blogathon you could either choose a particular performance from a black actor and describe why you love it or comment on a particular actor’s body of work; I chose the former. I’ve decided to describe my love for Hoodlum, in particular Laurence Fishburne’s well-crafted performance. To read up more on this Blogathon, click here.

I’ve always been of the opinion that understated and soft-spoken characters are always the most difficult to portray. All good acting takes skill but it’s far easier to note good acting when the character is extravagant or has obvious twitches and mannerisms that stick in your mind. However, when a character is more ‘plain’ and doesn’t have these elaborate idiosyncrasies to make them memorable, I think the actor has to work harder to make the character stick in your minds. This is what Laurence Fishburne does to perfection with the character of Ellsworth ‘Bumpy’ Johnson. 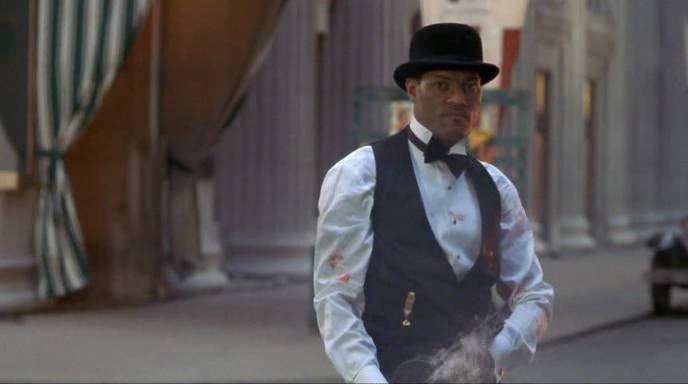 Johnson is a recently paroled murderer from Sing Sing prison who has absolutely no intention of turning his life around and walking the straight and narrow. He returns to the streets of Harlem, working under Madame Queen – the powerful and highly respected  owner of the numbers racket in the city. The Queen is on the brink of war with Dutch Schulz, a roguish and brutal cross-town rival who wishes to move in on the Queen’s territory. Bumpy is a man of extreme ambition and sees this brewing war as an opportunity to further his own place in the criminal underworld – either by helping the Queen win the war or even replacing her at the head of the table. As the story progresses, Bumpy’s power grows as does his ruthless nature. Soon Bumpy becomes a criminal kingpin but the route to the top is lined with blood, some of it belonging to those closest to him.

I’ve watched this movie several times – it’s actually one of those movies I grew up constantly watching; and with every viewing I appreciate more and more the skill in Fishburne’s performance. From the first introduction of Bumpy, it’s clear that he’s a highly intelligent, focused and determined character. There’s a calculated precision to everything he does: from the way he moves, to the way he thinks and even the way he speaks. It’s purposeful. This precision we see in Bumpy’s character is only possible because of the precision Fishburne puts into his portrayal. This is a great example of an actor completely mastering a role. Fishburne doesn’t only expertly portray this character, he fully embodies it. He molds and sculpts Johnson and personalises the character to such a great extent that you couldn’t imagine any other actor in this role. That’s what all great actors do – they develop a great understanding of the character and then infuse their vision into it and create a unique product that cannot be duplicated or replicated. 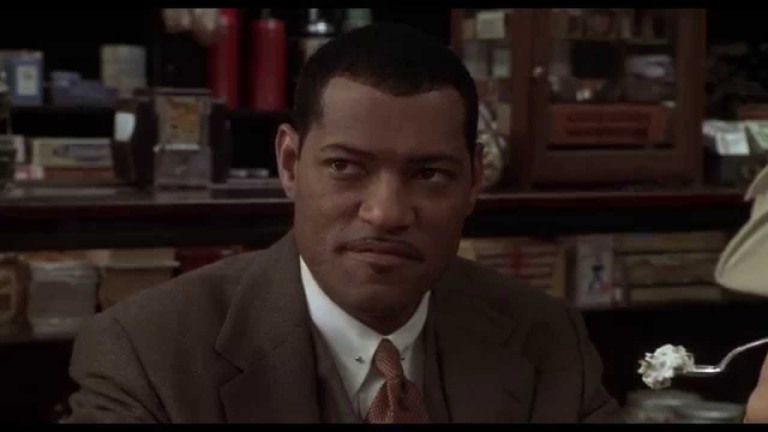 Fishburne also brings an irresistible and powerful presence to this role. Whenever he’s in a scene or walks into a room, you can feel the power and control he exudes. This is made all the more impressive when you think of how soft-spoken a character Bumpy is. He hardly ever raises his voice and, while he does have a few moments of violence, the majority of his time is spent speaking quietly and making tactical moves.  I wonder if Fishburne’s acting in this movie had anything to do with him being cast in The Matrix because he brings a similar kind of dominating presence to the character of Morpheus.

In closing, Laurence Fishburne remains one of my favourite actors and this, my favourite performance of his. This is a wonderfully methodical performance and Fishburne accurately portrays the different stages that make up a characters fall from hero to villain.

2 thoughts on “The Acting Black Blogathon – Laurence Fishburne in Hoodlum”