So I watched Home…

I’m still in the process of rounding up any stragglers from 2015 that I didn’t get a chance to watch. I think I had one or two opportunities to watch this particular film but opted to watch something I thought would be better both times. It had a cute trailer but I didn’t feel compelled to see it right away. Having seen it now, I’d say my initial assessment was correct.

Okay, basic plot: When an alien race called the Boov are forced to leave their planet in order to escape the villainous Gorg, they chose the Earth to be their new home. The Boov carry out an invasion of the planet, displacing the human inhabitants of Earth to various safe zones. One of the members of the Boov named Oh (Jim Parsons) is a bit of a social outcast. Oh is more freethinking than the rest of his people and craves things like friendship and interaction that are foreign concepts to the rest of his work-centred species. After Oh accidentally transmits the location of their new home to the Gorg, he becomes a fugitive and is forced into hiding. While on the run he meets a human girl – Tip (Rihanna) – who managed to escape capture and is currently searching for her mother. Although mutually distrusting of each other, the pair decide to work together to escape the Boov and, in time, a friendship develops. With the Gorg closing in, Oh and Tip must work together to find Tip’s mother and save their respective people. 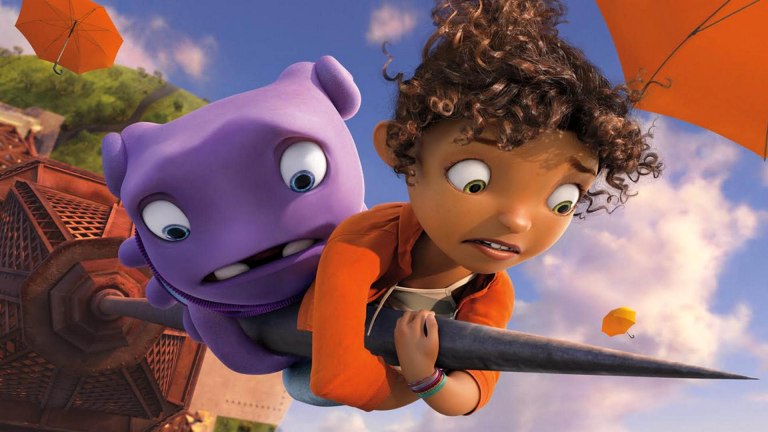 I think voice acting is an underrated art.Having a voice doesn’t mean you have what it takes to successfully voice a character; in much the same way that being able to run doesn’t mean you have the ability to be an Olympic athlete. It’s an extension of acting and even some good actors don’t make good voice over artists so Rihanna really was trying her luck in this movie. She, thankfully, isn’t as terrible as she is in live-action but her voice-acting leaves much to be desired. Her line delivery is often flat and lacking real emotion. She manages to struggle through but it could have been better. Jim Parsons doesn’t do much better either. His character ‘Oh’ is basically the animated version of his character on The Big Bang Theory, which means he has a good understanding of the type of character but I found his performance rather rigid. The two leads in this movie were definitely better together than apart but they never truly achieve harmony.

The movie itself is a fun kids movie and I enjoyed how true it stayed to itself. This movie isn’t going to be a classic but it is a worthwhile distraction for an hour or two. I particularly enjoyed how silly and illogical the film chose to be at times. There’s a part in the movie where Oh has to fix a car and he uses a slushie machine to power the car’s engine which also enables the car to fly. I love seeing that whimsical, imaginative spirit in kids movies because it makes me feel like a kid again. So even though I wasn’t the initial intended target audience of this movie, it appealed to me and I actually had fun watching this film.

I had a problem with Home’s soundtrack. The majority of the songs used in the film are Rihanna songs such as Only Girl In The World and Towards The Sun. This was quite unsettling because placing a Rihanna song which I associate with sex and lust in a sweet kids movie was a rather disturbing juxtaposition. Added to this the songs didn’t optimally match the scene they were assigned to. Normally the soundtrack of a movie feels organic and perfectly complements and accentuates the emotions of a scene, in Home the soundtrack feels forced and only there to try to please Rihanna. I wonder if her contract stipulated that her songs be used because that’s the only reason I can see a composer choosing these ill-fitting songs.

Overall, Home is sweet and funny but nothing more than a distraction. The quality of its animation is also sub-par when you compare it to the work of other Dreamworks productions. It’s a fun way to keep the kids busy for an hour but nothing more than that. Rather go watch Inside Out or The Little Prince. 6/10

One thought on “Home Review”