So I watched Vir Altyd…

South African cinema certainly is growing in leaps and bounds, with Afrikaans cinema leading the charge. I love the diversity in stories that we’re starting to see local filmmakers take on. The overall quality of the films is also improving and – while it is still a work in progress – going to watch a local movie over a Hollywood one is becoming less an act of blind patriotism and more and more a willing choice.

Okay, basic plot: Photographer Hugo (Ivan Botha) is a photographer who travels the world taking photographs for various magazines. Hugo returns to his hometown after several years of serving out a self-imposed exile. Hugo’s return to town happens to coincide with the wedding day of his former high-school-sweetheart, Nina (Donnalee Roberts). After Nina’s husband-to-be leaves her at the altar, she has a slight mental breakdown and a few too many bottles of champagne. Nina wakes up the next morning on a flight to Mauritius – where she and her fiance where planning to have their honeymoon. Nina isn’t alone though and wakes up to Hugo in the next seat. With no return flights immediately available, the two ex’s are forced to carry out a romantic adventure.

I do love myself a good romantic comedy aka ‘a chick flick’. There’s just something about love conquering all and the hero taking his love in his arms that puts a smile on my face. Often romcoms are silly and place unattainable expectations on love but that’s just a part of their charm. Vir Altyd delivers on this cheesy romance but it also adds some realism to its plot by expanding its scope to beyond our two lead characters. There are various couples in this movie from the couples on honeymoon at the same resort as Nina and Hugo, to the respective parents of our leads. This is a film that explores not only the different stages of love but also its different contexts.

I don’t want to get into spoilers but Nina and Hugo represent young love and how its passion and intensity can be blinding and all-consuming. There are various other couples who represent the banality that love can become or the way that love can die in a relationship until two people are in a functional partnership instead of a romantic bond. It was interesting to see the way these different couples interacted and what each one valued the most. This is by no means a super serious movie; it has great amounts of levity and fun in it but it doesn’t shy away from handling some more complex and deeper issues. This often leads to a great contrast because of the lighthearted energy of the film against the more earnest issues of love it addresses. 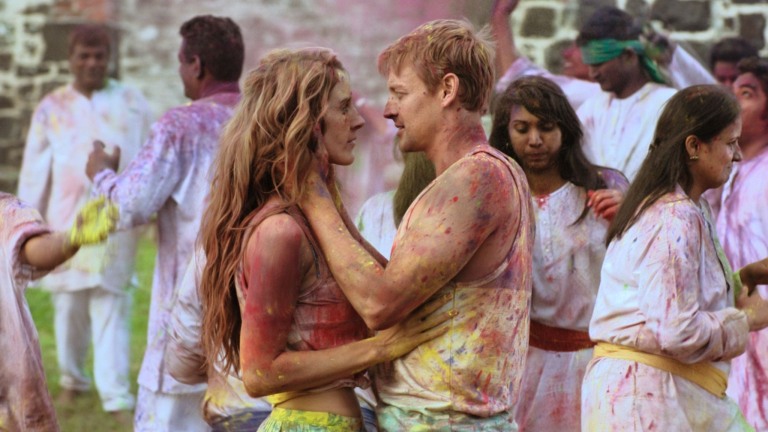 Ivan Botha and Donnalee Roberts have fantastic chemistry in this film. The connection between the two of them is palpable and it’s the cornerstone on which this film builds its success. I also enjoyed the two actors individually. Botha has a great brooding, remorseful quality to his character; while Roberts is not only beautiful  but also has this wonderful radiance and strength to her. In truth, the entire cast is entertaining and I enjoyed seeing all of them in action. Dirk Stoltz was probably the member of the supporting cast I enjoyed seeing the most. There’s a little dance routine in this movie that he treats us to which was a lot of fun and a perfect summary of this film’s spirit.

This film does suffer from an issue that I tend to see in a lot of local films – the final half of the second act and parts of the third act tend to lack focus. The majority of this film maintains a tight, focused narrative but near the end, things start to spiral a bit. You’re shown scenes that aren’t necessary and feel included in the film only to ensure that every actor contracted to the film has their fair share of screentime. I think South African movies need to tighten up that transition into the third act and not be afraid to leave a few scenes on the cutting room floor.

Overall, Vir Altyd is a good, cheesy romcom. I thought the romance was great and found the view into differing relationships refreshing. It makes a few mistakes here and there but overall, it’s a worthwhile trip to the cinema. Supporting local cinema is one of the fundamental steps to improving it, so go watch this movie, let it make some money so we can have more productions of this quality. 7/10

On a side-note, it would be great if local filmmakers had dedicated teams to creating Wikipedia pages and official websites so that finding out information such as actors names and character details would be easier for bloggers like me.