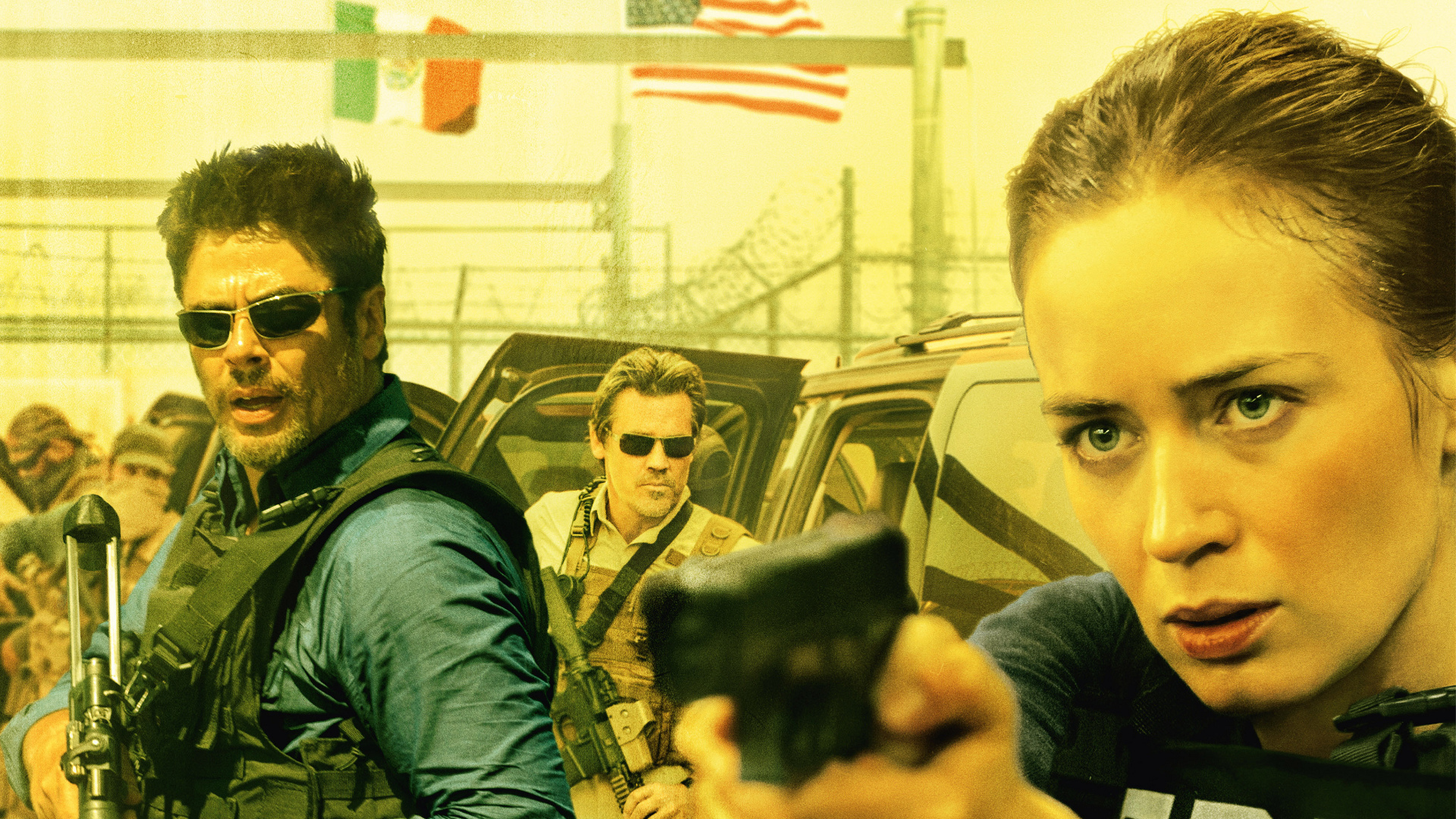 So I watched Sicario…

Of all the 2015 movies I missed out on seeing at the cinema, this was one of the few I regretted the most. I’d heard tons of great reviews and people were talking about potential Oscar buzz; but no matter how hard I tried I couldn’t carve out a two-hour window to see it. After seeing it I have to say that the regret has completely subsided.

Okay, basic plot: Agent Kate Macer (Emily Blunt) is head of a FBI kidnapping investigation unit operating in Arizona. Kate does good work but she just isn’t making a large enough dent in the escalating rates of kidnapping in the state or in the fight against the drug cartels who fund the abductions. Kate’s supervisor recommends that she join an inter-departmental task force that has been founded with the express intention of eliminating the drug cartels. Kate accepts and finds herself working under CIA agent Matt Graver (Josh Brolin) who is a bit of a maverick and completely believes in the ends justifying the means. Included in the operation is Alejandro Gillick (Benecio Del Toro) a former Colombian lawyer turned mercenary who has a score to settle with the cartels. As Kate delves deeper into the world of drug smuggling she realises that fighting the monsters that make up the cartels may require you to become a monster yourself.

This movie’s best feature, by far, is the quality performances that its impressive cast produce. I think had the cast not being betrayed by a rather suburban script, there could have been one or two Oscar nominations produced. Every performance of Emily Blunt’s I see comes with a deeper love for her as an actress. She has this ability to completely commit to a role and become unrecognisable. This isn’t because of makeup or prosthetics bur rather because of the way she throws herself into her roles and makes each one distinct. I had a problem with the way her character was written but her portrayal of Kate Macer was spot on. When an actor’s performance causes you to dissociate their identity outside the movie from the character in the movie and you, thus, only see the character, that’s a hallmark of great acting.

As wonderful as Blunt is, she doesn’t produce the best work in this film. Benecio Del Toro takes that prize. This film is all about deception and betrayal and wolf in sheep’s clothing and I think that’s what Del Toro masterfully brought to the film. His character reminded me of a coyote. Purposeful, ruthless and willing to go to any lengths to achieve his goal, even gnawing off his own foot. Del Toro brings this wonderful brute charisma to the role. You love his character even though you know you shouldn’t but because his charm is so overwhelming, you can’t resist. Josh Brolin also deserves a mention as he fills up this talented leading trio. Brolin’s character added some much needed levity into the film and kept things from descending into too dark a space. Brolin looks like he’s having the time of his life and this translates into a humorous, fun character who helps the movie stay light on its feet.

The problem I had with this film is that it was a bit of a chore to watch. The only other film I’ve seen from this film’s director -Denis Villeneuve – is Prisoners and I had a similar complaint with that one. This film’s plot is all about deception and mystery but the build-up is far too slow. The movie never kicks into gear and instead chooses to idle for far too long. The action sequences in this movie also lack real excitement. There’s no sense of danger or anything to put you on the edge of your seat; save for one interesting fight scene between Emily Blunt and Jon Bernthal (who features with a tidy cameo).This film is too obsessed with being realistic and providing an accurate portrayal of the real life events it’s based on.

Another problem I had was this film’s lack of focus and this is where I think a few people lost their Oscar nominations. Instead of keeping the story focused on our leading trio and their interactions with one another, the film constantly cuts back to random scenes of a side character. Now you’re hoping that these random cuts to this character are going to pay off with a major twist later on but they never do. If that character hadn’t been in the movie except for the two minutes at the end, it wouldn’t have changed anything. This stole screentime and lines away from the three leads and I think these stolen lines diluted the quality of the respective performances. While I found the acting of Emily Blunt to be superb, I thought her character was far too passive and didn’t play a role in the film’s plot at all. Her character is used as nothing but bait or a tool the entire movie and she has no impact on the plot. Everything is happening around her and to her but she’s not enacting any significant change; which is disappointing when you consider that she’s this film’s lead character.

Overall, Sicario is a film that promises more than it delivers. I think in the hands of Martin Scorsese or Antoine Fuqua this could have been a really great, gritty piece of urban film. Director, Denis Villeneueve just takes far too long getting this film in place and does it with too dull a hand. Screenwriter Taylor Sheridan also has to take part of the blame for his mundane and often non-descript script. It isn’t a horrible movie but it doesn’t need to be seen either. 6/10