So I watched The Jungle Book… 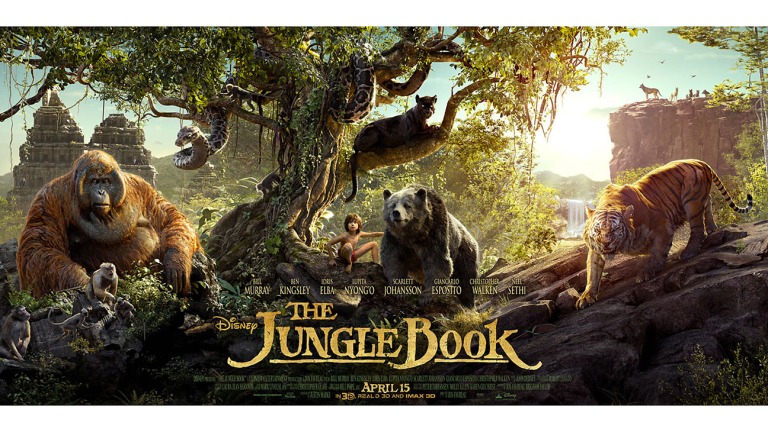 We live in a time where film is dominated by prequels, sequels and remakes. Now while many of these are often unnecessary and exist solely for big studios to make money, there are a portion of them that actually try to expand on beloved stories with new technology or fresh ideas. I was excited to see this movie because The Jungle Book is one of my favourite childhood films and the prospect of a live-action version was mind-blowing.

Okay, basic plot: After finding a baby boy alone in the jungle, Bagheera (Ben Kingsley) – a panther – takes the boy to a wolf pack and entrusts them with raising the boy who they name Mowgli (Neel Sethi). Mowgli struggles with jungle life but is happy to be part of the pack and the majority of the jungle has accepted his presence. This all changes when Shere Khan (Idris Elba) – a ferocious tiger – returns to the jungle and insists that Mowgli be killed because “man is forbidden”. In an attempt to keep his family safe Mowgli leaves the pack to find a new home. In his journey he runs into Baloo (Bill Murray) – a fun-loving bear who takes Mowgli in. However, Mowgli’s new home is far from safe as Shere Khan refuses to give up the hunt.

Remakes are extremely difficult to make. If you change too much, fans complain because the remake isn’t enough like the original; f you don’t change anything, fans complain and call you unoriginal. You’re damned if you do and equally damned if you don’t. I mention this because when you judge a movie like this, it’s impossible to judge it solely on its individual merit.  For many people this is going to be their first experience with The Jungle Book and they can judge it as a standalone movie but I’ve seen the original, I’ve loved the original so I need to compare. Now this might lead to some contradictory statements in my review but bear with me please.

First off, let’s talk about the visual delight that this movie was. I didn’t watch it in 3D but I still got the majestic aura that the groundbreaking visuals in this film provided. Nine times out of ten you can’t tell that you’re looking at something that was created on a computer screen. It’s clear that the people behind this film’s special effects worked incredibly hard on creating not only the look of a real jungle but also the feel. The way the animals move, their mannerisms; it was like watching an episode of National Geographic.

Now, while I thought the movie was an aesthetic achievement, I did find it lacking in terms of story. It’s the classic jungle book story, beat for beat and while that worked great for a cartoon, I wanted something more for a live-action film. This film feels more like a conversion – with pieces of story and themes directly copied – instead of a transformation which displays growth and innovation. There were new elements in the story such as the laws that govern the jungle and the way that Mowgli had to compensate for his decreased strength and agility compared to his wolf peers.These elements add a fresh spin to the classic story but the film reverts to copying the original far too much. It’s different but not different enough.

This film’s voice cast is extremely impressive and the entire cast is phenomenal. Bill Murray as Baloo was the perfect casting choice. Murray has this great relaxed and worry-free attitude which is perfect for the character. Christopher Walken as King Louie (one of my favourite characters from the original) was also fantastic. I had a slight problem with Ben Kingsley and Idris Elba. Both men do wonderful jobs voicing their characters – Bagheera and Shere Khan, respectively -but I felt they would have been better if they had switched roles. This is just a matter of personal preference and isn’t really a ‘problem’ per se.

Neel Sethi – who stars as Mowgli – certainly had a difficult role to fill in this. He’s the only ‘real’ character on screen and needed to be this film’s heart and anchor. Earlier I said that the film’s visuals work nine times out of ten; in the same way, Sethi’s acting works nine times out of ten. It’s that one time that bothered me. There are moments when you can tell that Sethi is just staring at a green screen and these moments remind you that you’re just staring at computer generated images and this removes the wonder of the whole affair. Don’t get me wrong, this kid does a great job and he’ll probably be one of your favourite things about the movie.

I previously stated that remakes are damned if they do and equally damned if they don’t. I’ve complained about the story and how it wasn’t different enough and now I’m going to complain about the songs and how they weren’t familiar enough. The original Jungle Book was a disney cartoon and, as such, had big, beautiful musical numbers with choreographed dancing and insanely catchy beats. This movie still has the songs but they’re performed in a much more simplistic and improvised manner. So instead of music swelling up and people being moved  to song; characters speak and then kind of gradually drift into singing. I didn’t really like it because I wanted those elaborate musical performances but I recognise why director, Jon Favreau chose to present them this way. This movie wishes to ground itself in reality and random music and songs wouldn’t really fit in.

Overall, The Jungle Book isn’t perfect but I think it does well to stand up to the original and establish itself as an independent piece of work. There are things that are different and others that aren’t so if you’ve watched the original, prepare to be disappointed but also pleasantly surprised. See, everything I say is a contradiction. Long story short, this film is worth watching and will introduce a classic story to a whole new generation. 7/10

3 thoughts on “The Jungle Book Review”