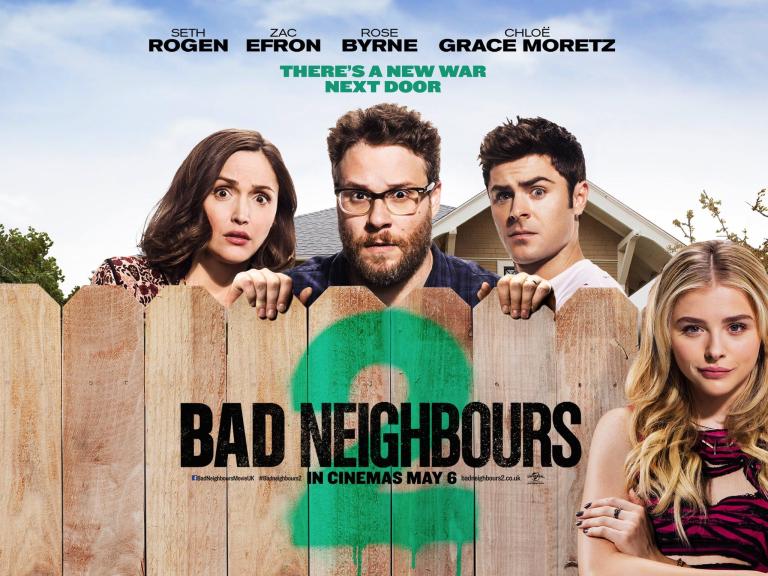 I had mixed feelings coming into this movie. I had enjoyed the first one and was excited about seeing more but I didn’t necessarily feel the plot warranted a sequel and worried that it would be missing the same quality.But when the original makes twenty times its budget at the box office, you can be guaranteed that a sequel is coming.

Okay, basic plot: Mac and Kelly Radner (Seth Rogen and Rose Byrne) are in the final stages of selling their house when a sorority moves in next door. The sorority – Kappa Nu – is run by Shelby (Chloë Grace Moretz), Beth (Kiersey Clemmons) and Nora (Beanie Feldstein) – three freshman who decided to start their own sorority free of the gender inequality of traditional sororities.Helping the girls start the sorority is a blast from the past in the form of Teddy (Zac Efron) who is still bitter over the fact that Mac and Kelly shut down his old fraternity. Mac and Kelly realise that no one will want to buy a house next to a sorority and try to persuade the girls not to throw any crazy parties until their sale is finalised. This leads to an all-out war between the two houses.

I was actually surprised by the depth present in this film’s storyline. Sure it still has silly gags and overweight people flying into/out of things but there’s also a few extremely mature themes it chooses to tackle. Chief among these is the inequality that exists between men and women. The premise that kicks this movie into action is the fact that the girls are frustrated with the fact that sororities can’t throw parties. This leaves them with no other choice but to attend parties thrown by fraternities and these parties often objectify women and exist solely for guys to get laid instead of to provide fun for all attending.

There are also several instances during the prank war where the girls feel guilty over how far they’re taking their jokes but push forward because “this wouldn’t be too far if we were guys”. It’s an interesting point to think about because even though society seems more tolerant and liberal than ever, these inequalities – which some may consider minor – still exist. I know this is meant to be a silly comedy but there plenty of these moments that get you thinking. There are times when it’s clear that the movie isn’t mature enough to properly explore these issues; but you have to commend the filmmakers for taking them on. 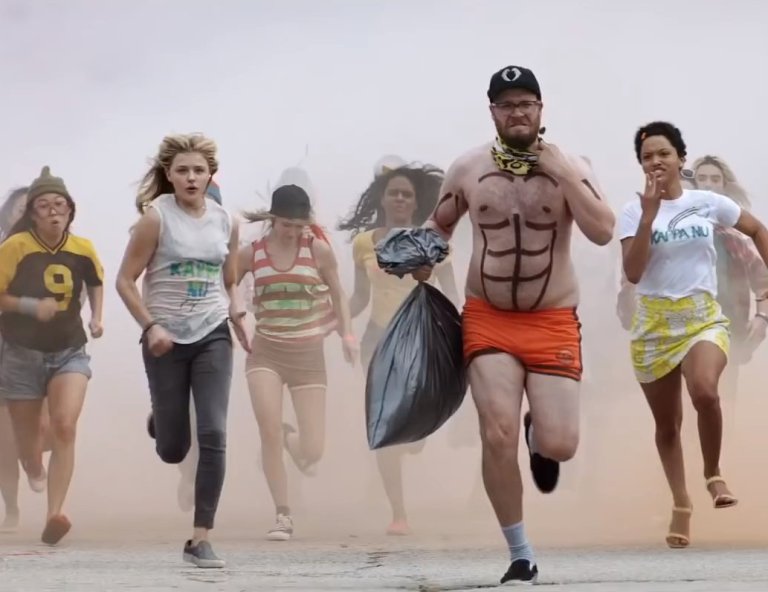 Don’t worry though, this movie is still a barrel of laughs. As with the original the best moments of humour come from the exchanges between Seth Rogen and Rose Byrne. They still have that great comedic chemistry and sell their relationship really well. Zac Effron also returns and does well as the simple but villainous Teddy. I like Efron and hope one day he’ll be appreciated for his work as an actor more than his work in the gym. The three female additions to the cast do alright but with the exception of Beanie Feldstein, I found their comedic chops lacking.

Sorority Rising is brought to you by pretty much the same team that made the first Bad Neighbours from director to writers to producers to actors. This is great because the film is filled with the same spirit and quality that made the first one so enjoyable. Unfortunately this works against the film as well because it walks down the exact same path as the original. There are a few new elements but not enough to discern this film from the original. If you watch this movie or watch the original, you’ll leave both feeling the same. So there really isn’t much need to go see this one then.

Overall, Bad Neighbours 2: Sorority Rising is an adequate sequel. There are moments when it focuses so much on giving you what you liked in the original that it forgets to create new memories for you to treasure. The cast do a great job and most importantly it is a funny movie and a great way to spend an hour-and-a-half. 7/10