So I watched Teenage Mutant Ninja Turtles: Out of the Shadows…

My interest in watching this film was the literal definition of the world ‘indifferent’. The original had been better than I had expected but it wasn’t good enough for me to like it or bad enough for me to hate it. In truth, I only ended up watching this movie because I arrived at the cinema too late to watch what I had initially intended.

Okay, basic plot: A year after The Turtles – Leonardo, Donatello, Raphael and Michelangelo – defeated The Shredder, the people in New York have found a new sense of peace. Life for The Turtles hasn’t changed all that much with their existence still been limited to the sewers; a fact that is beginning to way heavy on their minds. They are given little time to ponder their longing for a normal life, however, as the villainous Shredder escapes from prison dead-set on exacting his revenge on the citizens of New York and The Turtles in particular. Shredder – with the help of a mysterious alien from an unknown world – plans to assemble an army of genetically modified humans to battle The Turtles and reclaim control of New York. The four brothers must once again gear up to foil Shredder’s plan and defeat the dark hand behind Shredder’s plot. 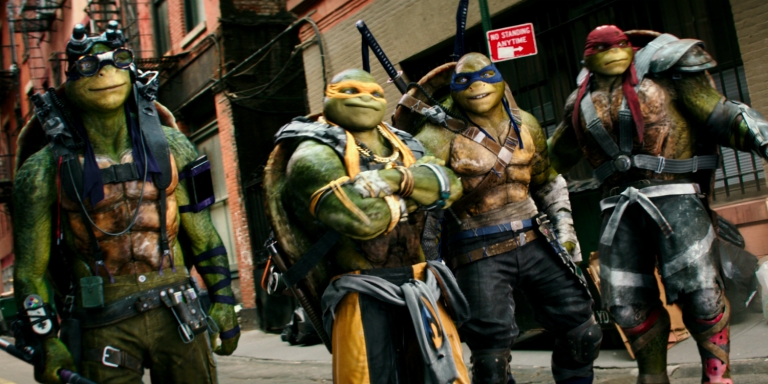 When the first TMNT movie came out in 2014 there was a overwhelming wave of concern over Michael Bay’s involvement with the project. Bay was only serving as a producer with Jonathan Liebesman directing; but there was a general sense that Bay’s influence would extend into the film’s overall feel. It did and the first TMNT felt very much like a Michael Bay driven vehicle. Now Bay serves – once again – as this film’s producer but this doesn’t feel like a Michael Bay movie. Director, Dave Green and screenwriters, Josh Appelbaum and André Nemec do a great job infusing this film with a distinctive spirit. Out of the Shadows was wonderfully reminiscent of the TMNT cartoons I grew up watching.  The film is filled with more fun and the character of the turtles is presented with a more adolescent mindset. It’s clear that the four lead characters are teenagers through the way they behave and interact with one another and this makes this film feel like a more faithful adaptation than the first.

I just used the words ‘lead characters’ to describe the turtles – a description that was impossible in the first movie. Where the first movie had Megan Fox in the fore and the turtles as her backup dancers, this film places the turtles at centre stage and keeps the spotlight firmly fixed on them. This worked well because although April O’Neil is essential to any Turtle story, she should never be the focus. Not to mention that the less you see of Megan Fox’s ‘acting’ the better for your enjoyment of any film. The cast also includes new addition Stephen Amell as Casey Jones. Amell definitely tries to make Jones his own and while I did appreciate his performance, I found this film’s interpretation of Jones to be not only inconsistent but also not in line with the character I remember from the cartoons. Jones goes from being a wimp practically cowering in the corner to an indestructible action hero who sneezes nuclear explosions and kicks all the ass.

Will Arnett also returns as Vern Fernwick and receives a promotion from the bumbling idiot he was in the first movie to a bumbling useful idiot in this one. I liked Arnett but felt his character was superfluous. There are quite a few new additions to the cast and Arnett’s Fernwick felt like dead weight which could easily be left behind at any point. The best members of the cast (and perhaps the best thing about this entire movie) have to be Gary Anthony Williams as Bebop and WWE Superstar Sheamus as Rocksteady. The two are absolutely hilarious and provide the perfect comic relief in every situation. I did find the CGI used to create the characters lacking at times but the two actors do a wonderful job and they often steal the show away from the turtles. 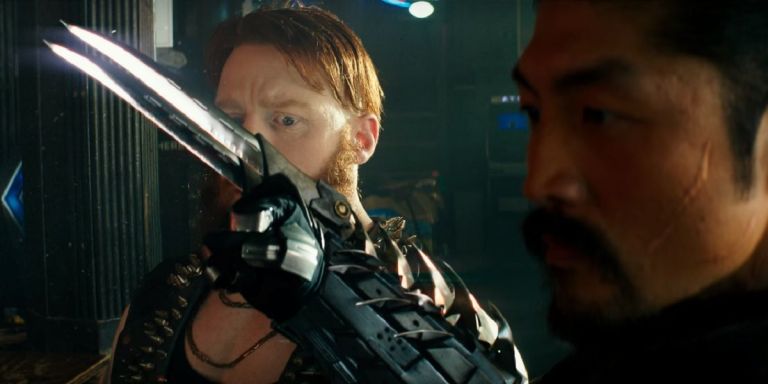 I mentioned earlier that Will Arnett’s Vern Fernwick felt like an unnecessary part of the cast and (I can’t believe I’m going to say this) the same is true of Brian Tee’s Shredder. I found Brian Tee’s performance to be lacklustre and lacking the malicious menace that Shredder normally has in abundance. However, I felt Tee’s mediocre performance was  merely a symptom of poor writing. When you think Batman, you think Joker; Superman, Lex Luthor and the same goes for Teenage Mutant Ninja Turtles, Shredder. It’s an iconic hero/villain pairing but Out of the Shadows relegates Shredder to the equivalent of an imbecilic henchman. He spends the majority of the movie carrying out the bidding of someone else and is then discarded like he’s just another faceless underling there to serve as canon fodder to our heroes. If you’re going to make Shredder so useless rather not include him in the story.

Now while I did enjoy the general spirit the turtles were presented in, I have to say that I found their characterisation rather one-dimensional. Each character’s personality is entirely a product of their role in the team: Leo is the leader so all he does is tell people what to do; Donatello is the brains so all he does is spew out an endless stream of techno-babble; Raph is the muscle so all he does is grunt and hit things and then Mikey is the fun-loving idiot so all he does is…well like fun and act like an idiot. There’s nothing in the way of character development in this film and even though we see a lot of the turtles, the majority of the time it’s in an action sequence where we don’t get the opportunity to connect with them. That’s another major flaw in this movie – it completely lacks an introduction. We’re thrown headfirst into things and never afforded a moment to reassess or witness interpersonal drama between the turtles properly play out. I like non-stop action as much as the next guy but you still need a moment to breathe. Speaking of there being a lack of moments to breathe, I felt this film should have been five minutes longer so it could avoid taking as many shortcuts as it did. It felt like the film wanted to be incredibly concise and the way it chose to do this was by presenting the turtles with questions or challenges and immediately providing the solutions without any need for actual work by the turtles. It chose to do this by having Donatello know LITERALLY everything. As aforementioned, he’s the brains and as such is there to work problems out and explain things to the rest of the team. Unfortunately there are moments when his intelligence borders on the clairvoyant. He’ll see something and instantly be able to accurately describe every detail of it without the need for research or thought. It’s almost like he’s omnipotent OR he read the script. I’m guessing he read the script!

Overall, Teenage Mutant Ninja Turtles: Out of the Shadows is better than its predecessor but in the exact same breathe worse. It solves many of the issues that the first film had but instead of taking the things that worked well in the first it throws the baby out with the bathwater and makes whole new mistakes. It’s worth watching but not worth paying any money for so I’d wait till it gets its TV release. 6/10

P.S. Tyler Perry has a small role in this film as Baxtar Stockman – a scientist who works for Shredder.  He’s actually quite fun to watch and had me laughing whenever he was on screen. Can’t believe I’m going to say this but this film definitely needed more Tyler Perry.