Watching this movie was actually quite a big deal for me. Just over a month ago I was contacted by a PR agent who asked if I’d like to receive information about press screenings. Obviously I jumped at the opportunity, still amazed at the fact that this little blog of mine had gotten me this chance. It’s always a pleasure watching a movie, even more so when you get to see the film a month before its release.

Okay, basic plot: Aleksa Cloete (Sandra Prinsloo) is a well-known, respected psychologist whose life is seemingly perfect. She has a loving husband and family, her new book has just being released and she’s having a documentary produced  on her therapy style. Aleksa’s life is thrown into a tailspin when her husband, Ben (Marius Weyers), contracts a rare disease that renders him paralysed from the neck down. Furthermore, one of Aleksa’s patients suffers a breakdown and her murderous actions are blamed on malpractice by Aleksa. With her life falling apart around her, Aleksa will have to make a decision that will go against all her ethical standards to prove her love to her husband. This film’s best feature has to be the quality of its cast, in particular, Sandra Prinsloo in the lead. I’ve spoken out in the past over how casting celebrities instead of proper actors can be fatal to a film; so it’s great to see a local movie that has out-and-out actors in it. They do a fantastic job bringing the film to life and it’s blatantly obvious the contrast between professional actors and celebs who are merely there to create hype. Sandra Prinsloo and Marius Weyers are the two seasoned veterans who set the standard for excellence in this film that the rest of the cast follows. They are faultless in their performances and the two had amazing chemistry. I hadn’t seen a production with Sandra Prinsloo before this and I was thoroughly impressed with her acting skill and sense of presence. In truth the entire cast do amazing work with the likes of Shaleen Surtie-Richards and Roelof Storm putting in entertaining turns as members of the film’s supporting cast.

The main problem I had with this film was in its writing and the lack of focus displayed in its script. Anita le Roux – who wrote this film’s script – previously served as a producer on various TV dramas and documentaries and I mention this because Twee Grade Van Moord often felt more like a TV soapie than a feature film. There’s too much happening and a lot of what is happening has no bearing on the final outcome of the plot. I appreciate layering characters and making them feel like actual people with problems outside the plot; but this film takes it a bit too far. We’re shown points of conflict between characters and this conflict is never addressed again in the film or is treated like it never happened. This makes the film feel muddled because even though a lot is happening, none of it is of any substance or consequence to the plot. 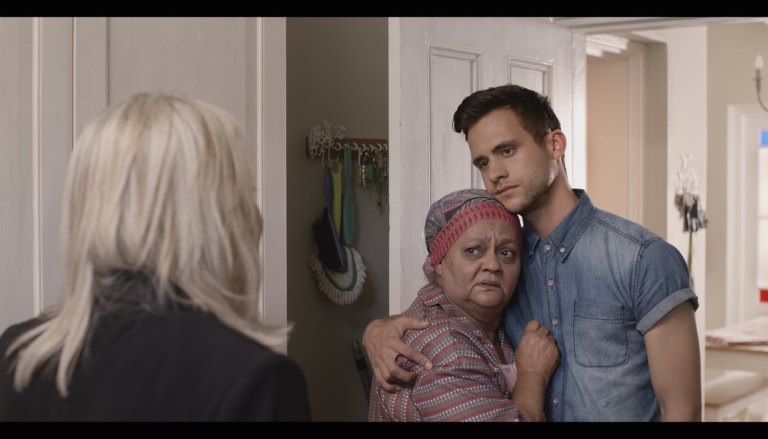 Futhermore, I think director – Gerrit Schoonhoven should have done a better job reeling the film in and giving it more focus. Schoonhoven also spent several years working in TV and the lack of focus that exists in this film’s writing is reflected in his direction. That being said, this film does have a great story at its heart. I don’t want to get into spoilers , but the value of life and, in turn, death are well explored in the film. It asks challenging questions and this helps it stay engaging and entertaining to the audience. I wish we had seen more of Marius Weyers’ character and his interactions with his wife and family. Weyers is pushed to the periphery and we’re often told what his character said instead of actually hearing him say it. This was disappointing because half of the tension in this film is inspired by his character and his struggle with paralysis.

I also have to applaud this film for getting the little things right. I know things like proper sound-editing and camera work seem so trivial that they don’t warrant mentioning; but this is often the place that South African films stumble. The film is well-shot and put together; which I loved because if you get the small things right that can form the basis to kick off and do the extraordinary well.

Overall, Twee Grade Van Moord is an entertaining film that suffers from a lack of clear focus. This, however, doesn’t take away too much from the enjoyment of the film. The acting is superb and the core themes that the film explores engaging. It’s worth a trip to the cinema. 7/10