Dell from over at Dell On Movies is at it again and bringing you this year’s edition of The Against The Crowd Blogathon. The premise of this blogathon is to write on two movies – one you hate that the world loves and one you love that the world hates. It’s a great opportunity to have a rant and show the world why its opinion is SO wrong. Now I’m not only taking part in this blogathon, Dell has actually asked yours truly to co-host. So with no further adieu, let’s get to my movie choices. 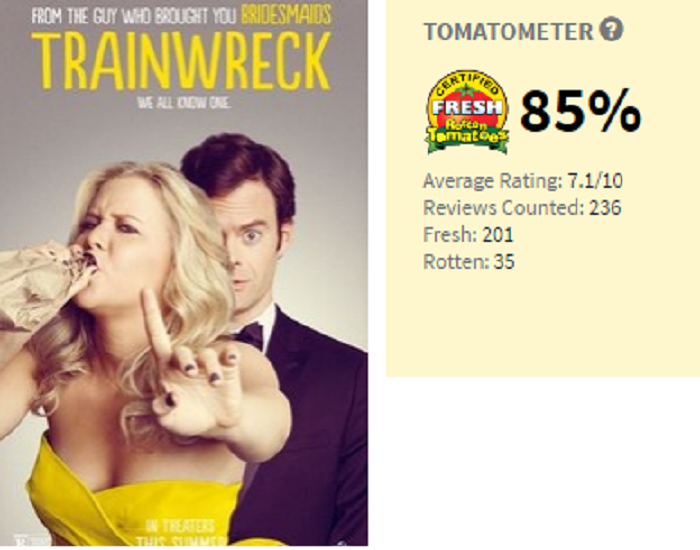 I’m a die-hard fan of romantic comedies, especially unconventional ones that are grounded in reality and lack the conventional cheesiness that’s a hallmark of the genre. So you would think that Trainwreck would be right up my alley and that I’d be joining the thousands of fans who loved it, right? Wrong! This film had many features that I found repellent but chief among these was its length. The movie is over two hours long but my patience for it only lasted an hour.

I really don’t mind long movies as long as their story warrants the extended runtime. Trainwreck‘s story was stretched out and could have been settled well within 90 minutes. Another major problem I had with it is that it just wasn’t funny. Or rather the type of comedy didn’t match the film’s style. If I had gone to see an Amy Schumer standup show and she recited this film’s script, I probably would have been in stitches but the jokes that the film consisted of didn’t work in the context of the film. They’re fired off without any harmony and don’t compliment the film at all.

This is one of those examples where a film has a fun trailer but nothing else. I really wanted to like this movie but it didn’t give me any reason to. I like Amy Schumer because she’s different and edgy; but this film feels like nothing more than a vanity project and it tries so desperately to be different that it comes off as brash and off-putting instead of innovative and charming.

Now for the movie I love that the world hates…I expect some backlash for this one.

I remember the exact feelings I felt while watching this movie in theatres: disdain for its acting and writing but absolute love for its action sequences. I was entertained and that’s what I loved about this film. It isn’t perfect nor is it trying to be and it manages to give you a good time. Arnie is back, kicking ass, spewing out one-liners, what more do you want from the world? The fight scenes in this movie had me on the edge of my seat. They drew me in and made me completely forget about this film’s flaws.

That’s the beauty of art and film is an art. It’s subjective, the literal definition of beauty being in the eye of the beholder. Two people can see the same thing but have completely different viewpoints of it. This film entertained me so I love it; it’s as simple as that. The world hates it…and they’re wrong. Watch this film for what it is and not what your nostalgia-tinted goggles want it to be and you’ll have fun.

Now the purpose of this post isn’t just to have you tell me how stupid I am for loving Terminator: Genisys; it’s also here to give you a recap on what happened on Day 4 of the blogathon.

On The Screen Reviews finds little magic in a little boy’s childhood but goes crazy for a Sandra Bullock, Nicole Kidman teamup.

My co-host, Dell On Movies goes wild and disintegrates Emile Hirsch while standing up for a not-so-loved superhero flick.

Time’s running out for you to get involved but you can still lend your voice to this blogathon if you rush. Do that by clicking here and getting the rules. I just want to send out a huge thank you to everyone who’s participated so far and to Dell On Movies for asking me to co-host. It really has been a blast.