So I watched Passengers…

This film was nowhere near the film I expected it to be. I had absentmindedly watched its trailer and skimmed through its synopsis, so I walked in expecting a sci-fi thriller; but I’d actually classify this film as a sci-fi romantic drama. A sci-fi-romdram? Okay, while I figure out a cool abbreviation for this new category of film, let’s get to the review.

Okay, basic plot: The Avalon – a highly sophisticated starship – is thirty years into its one-hundred-and-twenty year journey to a new planet. Aboard it are 5 000 passengers who are all suspended in a state of induced hibernation. After a ship malfunction, one of these passengers – Jim Preston (Chris Pratt) – wakes up, ninety years too early. Preston soon discovers that he’s the only passenger who has woken up and that he’ll be dead long before the ship reaches its destination. Despondent and alone, Jim is given a life line when another passenger – Aurora Lane (Jennifer Lawrence) also wakes up. The two soon become lovers but when the ship experiences further malfunctions, it soon becomes apparent that these two leaving hibernation may not have been an accident.

I love the trajectory that Chris Pratt’s film career is following. He’s either landing roles in big blockbusters or putting in rich, entertaining performances or even doing both. This film isn’t a blockbuster hit but luckily Pratt manages to put in an astounding turn. The opening third of this film focuses heavily on his character and feels familiar to Castaway with Tom Hanks. You see this character slowing losing his mind and all hope as he languishes on this ship all alone.. Pratt is captivating and puts in a performance full of sincerity and compassion. You fall in love with his character and his pain become yours. Eventually Jennifer Lawrence shows up and she does a fantastic job too but Pratt steals the spotlight and it belongs nowhere else but on him in this film.

When Jennifer Lawrence’s character shows up, that’s when the film kicks into high gear and took an unexpected turn. Up to this point, the film had a sci-fi thriller feel to it but with the introduction of Lawrence’s Aurora, it turns into a romance film. Not in a cheesy, 90’s romcom sort of way but rather in philosophical manner that encourages you to evaluate the true value of companionship and love. There are a plethora of difficult decisions and realisations that are reached during this film’s love story and it’s beautiful to watch. It’s highly intelligent and a feature of the story that is beautifully withheld in the film’s trailer and marketing. 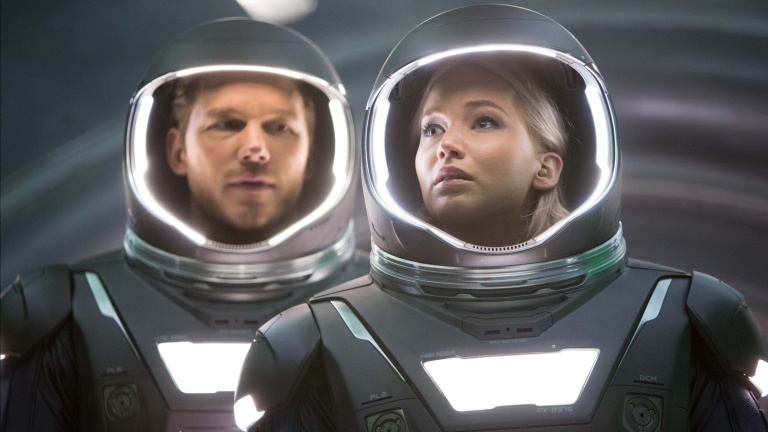 Unfortunately the film’s final third, returns to more expected sci-fi thrills. it is still entertaining but lacks the emotional punch of the second third. The ending of the film is also rather predictable but the lead up to it is so well-throughout and engineered that it earns the right to be a tad bit formulaic. Now even though this film is predictable near its end, it still manages to make the ride there exciting. I was on the edge of my seat begging for a happy ending, even though I knew that one was almost guaranteed. It isn’t always about the destination and a film that manages to craft a journey as exciting and breathtaking as this, is doing a good job.

I also have to praise Michael Sheen who stars as Andrew – an android barman who befriends Jim and ensures he has plenty of whiskey to drown his sorrows in. I always think playing machines is a challenging task because you have to deliver the coldness of metal while still ensuring that your performance has the warmth of humanity. Sheen does a great job and he’s a real source of humour in this film.

Overall, Passengers was surprisingly entertaining. It has a powerful story which challenges the idea of morality and how everything is fair in love and war. Chris Pratt and Jennifer Lawrence have electric chemistry and the pair are amazing to watch on screen. This film deserves watching. 7/10