So I watched Four Weddings and a Funeral…

While I have heard this film’s name thrown about through various parts of my life, I had actually no clue what it was about. I knew it was a romcom, that Hugh Grant and Andie MacDowell were somehow involved and that there was a famous line about realising what you wanted while standing in the rain but besides that its plot was completely foreign to me. I really enjoyed this movie if nothing else just for the absurdity of its plot.

Okay, basic plot: Charles (Hugh Grant) is somewhat of a serial bachelor, as he puts it, “he’s always attending weddings but never having one of his own”. Charles thinks that his luck may change when he meets Carrie (Andie MacDowell) – an American who is a guest at one of the weddings Charles and his friends are attending. Over the course of three more weddings and – sadly – one funeral, Charles falls in love with her. Unfortunately one of the weddings is Carrie’s and she’s set to marry a man that isn’t Charles. Furthermore Charles finally ends up having his own wedding but to a woman that isn’t Carrie.

This film reminded me an awful lot of 2015’s Steve Jobs; though I should say that Steve Jobs reminded me of Four Weddings since this film did come out twenty-one years before it. The film’s story is confined and told almost entirely through these five social events. The characters’ interactions occur at the actual events or the moments just following them. This story telling technique (besides in Steve Jobs) is one I’ve never seen before. It keeps the film in a constant state of motion because something always appears to be happening because there’s always an event that needs attending.

It also leads to interesting character introductions and development because we’re always placed in the middle of the action. We, therefore, don’t always necessarily have all the information about the situation at hand and have to draw context from the scene as it unfolds. This leads to a sense of engagement you won’t find in most romcoms  because you’re actively piecing the puzzle together as the film goes along. The one downside to this is that because Charles and Carrie only meet five times (save for one random encounter which I won’t spoil) there’s no time for them to build chemistry or for us to become invested in their love story. I enjoyed the film but the fate of Charles and Carrie’s love was inconsequential to me and I found myself often asking, “why/how are these two in love?”

Now while I didn’t care about their love story; I did find the characters of Charles and Carrie interesting. This was early on in Hugh Grant’s conquest of the romcom genre and there’s a rawness and child-like innocence to his portrayal that I particularly enjoyed. His stuttering-swagger isn’t completely refined – as it would become in later films – but it’s still enjoyable and he’s still the perfect leading man in romcoms. Andie MacDowell does a fine job as Carrie. Carrie is meant to be this cool and confident lady who is out of Charles’ league. She does a great job through the majority of the film but often her character’s casual demeanour slips into cold disinterest. I think this further added to my lack of investment in the love story between the two leads. 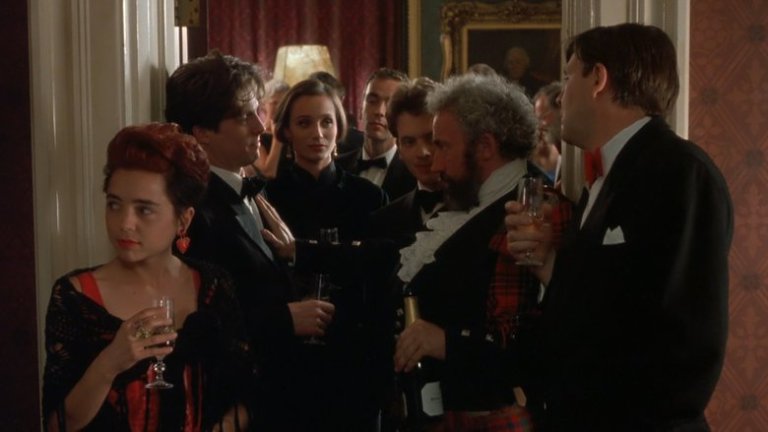 One thing I love about Richard Curtis – who wrote this film’s script – is the detail and respect he gives to the film’s supporting cast. They never just cookie-cutter characters who are meant to fill up the numbers, they’re actual people with personalities who not only uplift the general quality of the film but often steal focus. Simon Callow who stars as Charles’ extravagant and fun-loving friend, Gareth, definitely steals the show. He was my favourite character in this film and I loved the freedom with which Callow portrays the character. Also deserving special mention is Rowan Atkinson who has a brief cameo in this film as a man studying to become a priest. He delivers the most humourous and memorable wedding service I’ve ever seen.

This film also hit home for me because the older I get, the more weddings I seem to attend. Like Charles, I’m beginning to wonder why I’m always attending weddings and never having one of my own. Though I have been watching a horde of romcoms for the purposes of this month’s theme of romance in film so maybe the hopeless romantic in me is running wild fuelled on Hugh Grant’s boyish good looks and Meg Ryan’s enchanting smile.

Overall, Four Weddings and a Funeral is without doubt a classic. The format which it presents its story is unique and keeps the film moving steadily forward. It always stops the film from running out of steam and by the time the end does come around, you’ve barely noticed that two hours have gone by. This is definitely a film worth watching.