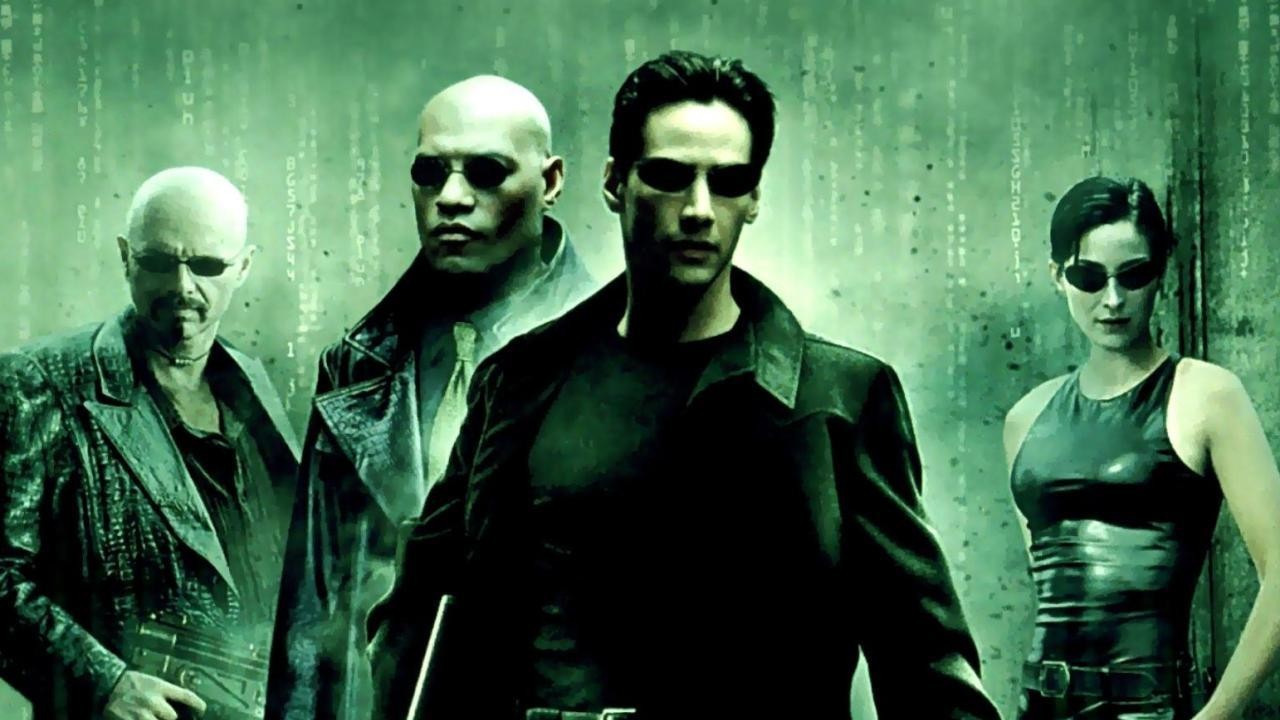 So I watched The Matrix… 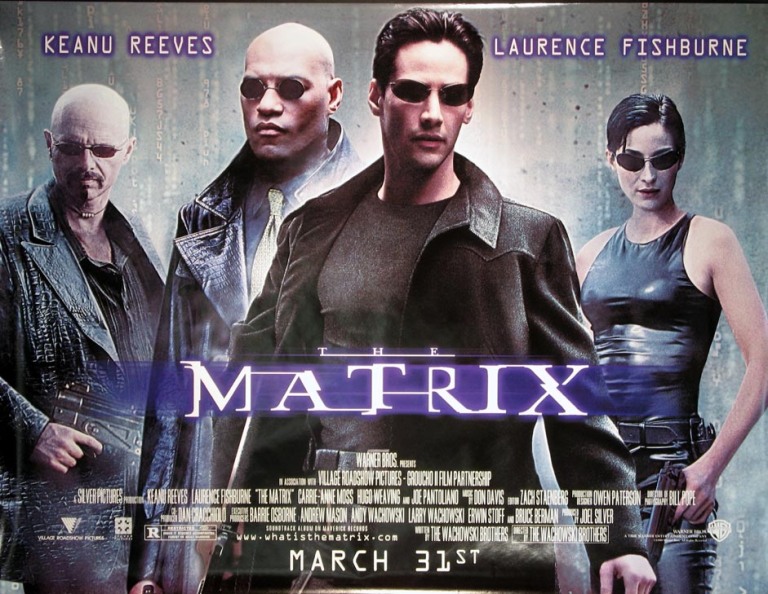 This is one of those films that will cause you to question everything about your reality. It will force you into asking the really difficult questions such as: are The Wachowski Brothers visionary, talented filmmakers or just one hit wonders?

Okay, basic plot: Thomas Anderson (Keanu Reeves) is a man leading a dual life. On the one side he’s a programmer working at a successful software company. On the other side he’s a computer hacker who sells illegal programs and goes by the name ‘Neo’. Neo feels an undeniable feeling that something is wrong with the world and is searching for a man called Morpheus (Laurence Fishburne) – a man he believes can answer his questions about ‘The Matrix’. Morpheus shows Neo the horrifying truth about what The Matrix is – a computer simulation designed by machines to pacify a conquered human race. Morpheus believes that Neo will be able to defeat the machines and free humanity from their slavery. He believes that Neo is ‘The One’. 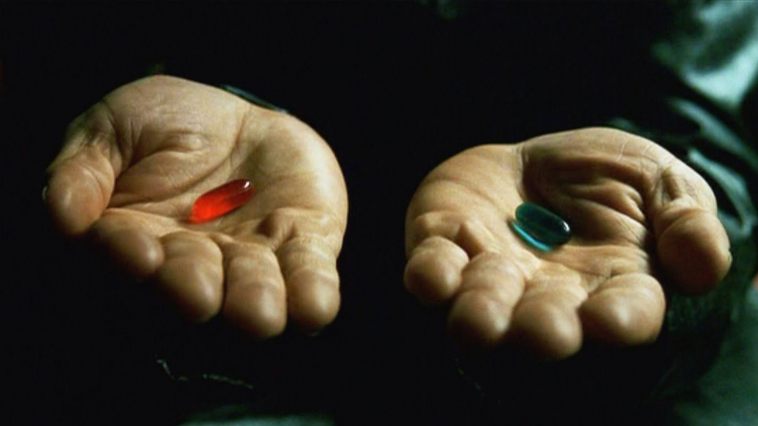 This is, in my opinion, not only one of the most innovative films ever made but also one of the best ever made, period. It displays excellence from both behind and in front of the camera. The Wachowski Brothers (Lana and Lily) manage to create a film that engages both your action-craving  wild side and your intellectual, higher-thinking self. The idea of ‘reality’ versus what is ‘real’ is masterfully explored in this film. The philosophical implications of this battle are intriguing and will have you wondering how you would know if you were in a dream (aka The Matrix). I know what you’re going to say, “Your totem would just keep spinning”. Inception actually has several similarities to this film; in that, they both cause you to question reality both in terms of its boundaries and authenticity.

Yes, this is a thinking man’s movie but it’s also an action buff’s wet dream. The concept of The Matrix being a simulated reality removes the conventional limits of an action film. People can be stronger, faster, learn skills in an instant. Now, of course, many movies live without these limits anyway; but the difference is that in The Matrix the limits are removed because of logic and reason and this makes the ensuing action all the more satisfying because it doesn’t need to come with a suspension of disbelief. The way the action films are filmed is also wondrous. The Wachowskis are responsible for the popularisation of ‘bullet time’ – a filming technique where the heightened perception of the character causes the action to move in slow motion but the camera moves through the action of the scene at normal speed. The classic scenes with Neo dodging bullets or Trinity (Carrie-Anne Moss) jumping in the air to deliver a kick are iconic and have been replicated in many instances in pop-culture. 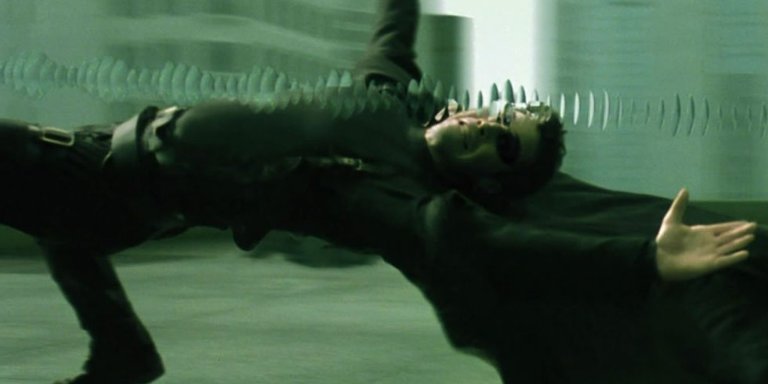 This is probably Keanu Reeves’ best performance in my book. I’ve never thought of Reeves as a good actor, he has a niche spot – that softspoken and conflicted character – that he does well in but offers nothing more. I do, however, think Reeves is a wonderful action star and his physical presence on screen is amazing to watch. Reeves manages to portray Neo’s mopey and aloof character to perfection; but it’s in the action sequences where he truly shines. Along Reeves are Carrie-Anne Moss and Laurence Fishburne as Trinity and Morpheus, respectively. Moss does well as the strong-willed, independent Trinity. She’s a badass and often steals focus from Neo.

The true star of the show here though is Laurence Fishburne as Morpheus. Morpheus is depicted as being something of a messiah. An all-knowing character who leads with heart and absolute devotion to his cause. He recruits Neo and his belief drives Neo to fulfilling his full potential. The character is brought to life majestically by Fishburne. There’s a regal and god-like presence to Fishburne’s performance. I can’t imagine anyone else playing this part and you could make a case that Fishburne deserved an Oscar for his fine work. Click here to read more about that. 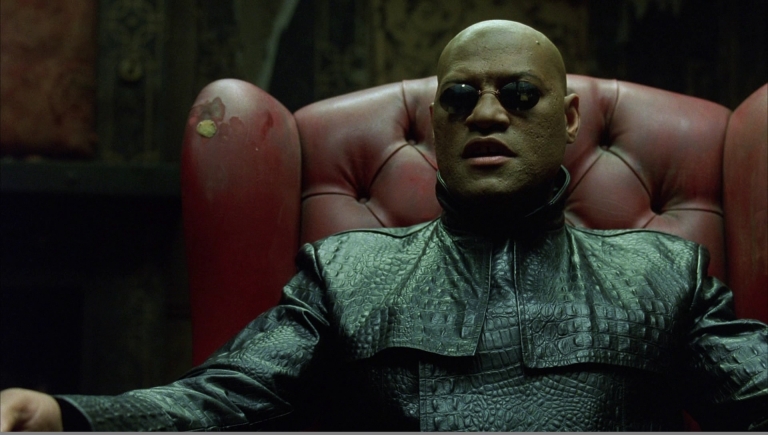 Hugo Weaving also deserves praise as the film’s main antagonist – Agent Smith. Smith is a sentient programme who watches over and enforces the rules of The Matrix. Weaving does a fantastic job portraying Smith. Though he seems like a one-note villain; there’s a highly memorable scene between Smith and Morpheus where we get a deeper look into Smith’s character and Weaving does grand work showing the true villainy of the character.

The main problem with this film is the litter of plot inconsistencies it’s filled with. The film establishes rules but then ignores the rules or flat out breaks them depending on the needs of the plot at the time. One of the major rules it breaks are the powers of the agents. We’re told early in the film that the Agents can access the body of anyone in The Matrix. This means they can be anywhere and everywhere further increasing the danger they pose. Though there are several instances in the film where the Agents chose to forget they have this power. This is really only something you notice after repeated viewings and won’t bother you if you’re casually watching the film.

Overall, The Matrix is an undeniable classic. Its action is breathtaking and functions through the freedom created by its truly visionary plot. The Wachowski name might not mean much in film at the moment but this film definitely turned them into royalty. Worth the watch whether you want to ponder over reality or just see some cool bullet time action.