So I watched The Green Mile…

This is one of my all-time favourite films. There’s a novelty it still possesses that has never worn off even with multiple viewings. I love the writing of Stephen King and Frank Darabont’s adaptation of his work is top notch.

Okay, basic plot: In 1999, an elderly Paul Edgecomb (Dabbs Greer) recounts his time working as a prison officer in charge of death row inmates. In 1935, a young Paul Edgecomb (Tom Hanks) meets the newest inmate sent to his block – John Coffey (Michael Clarke Duncan). Coffey is accused of raping and murdering two young children. Edgecomb’s initial assessment of Coffey does not reconcile with the vicious murderer he is painted as. Coffey is – in fact – more than he seems. He has hidden gifts; gifts that reach into the supernatural. As Edgecomb learns more and more about Coffey the idea of  having to send such a man to execution becomes increasingly difficult. 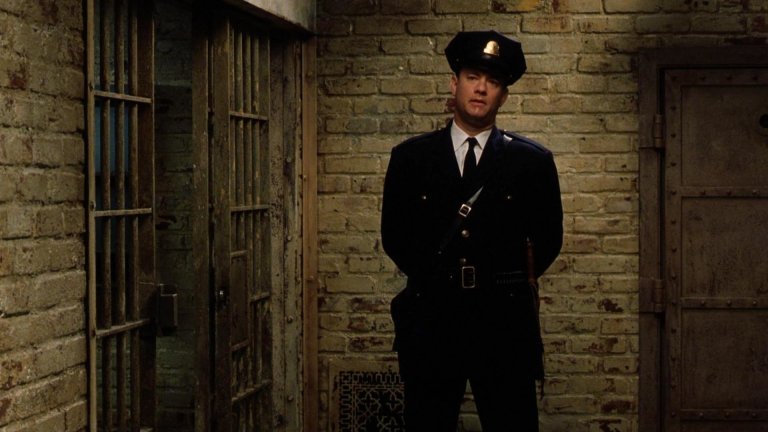 I wanted to start this review by commenting on how this movie is probably my favourite film set in a prison after The Shawshank Redemption. I didn’t know that Frank Darabont who adapted the script and directed that film also directed this one. There are obvious similarities between the two films in both setting and plot points; but the real similarity is the depth, complexity and respect with which Darabont uses to create this film’s characters. He moulds and crafts characters that are more than just stereotypes or cliche. The ease with which you can invest and connect with his characters is due to the richness he imbues each one of them with. There’s also a patience and meticulousness to Darabont’s writing that allows you to fully experience the story. This film is just over three hours long but it deserves its runtime. Its story is rich and couldn’t be experienced properly if compacted into less time.

The acting in this film is also A-class. What can we say about Tom Hanks that hasn’t been said already? He is an actor par excellence! He manages to always step fully into the skin of the respective character while still managing to bring his inherent charm and idiosyncrasies to the role. It’s interesting because normally when you see an actor instead of the character they’re portraying it’s a problem. With Hanks, however, you have a better view of the character because you view it through a Tom Hanks lens. I know it sounds like a contradiction but Hanks has the ability to both completely immerse himself in a character while still being recognisable as himself. It’s brilliant to watch actually.

Though Hanks is amazing, the real star of this show is Michael Clarke Duncan as John Coffey. I recently hosted a blogathon about Unsung Heroes and Duncan’s performance in this film was my choice. He certainly deserved his nomination for an Academy Award and – with no respect to Michael Caine’s performance in The Cider House Rules – I think Duncan was robbed. I think if he had made this film later in his career – after the cheesy action films and comedies – he definitely would have won the Oscar because of the juxtaposition. I know it sounds nonsensical to say because a performance should stand on its own, free of outside influence and politics. The Academy, however, is as much a political organisation as it is one meant to celebrate art.

The rest of the cast in this film also put in wonderful performances. Sam Rockwell, in particular, is phenomenal as Wild Bill Wharton. Rockwell is another unsung hero and a wonderful performer who always loses himself in the character. Wild Bill is a savage and intense character and Rockwell brings him to life excellently. David Morse who stars as Brutus ‘Brutal’ Howell – the right hand to Edgecomb – also does solid work and is one of my favourite characters. The cast is rounded up the likes of James Cromwell and Bonnie Hunt who both manage to craft memorable characters with little to no screentime.

Overall, The Green Mile is a wonderfully poignant film. It’s filled with memorable lines of dialogue and has fine displays of acting. There’s also a wonderful look at euthanasia and the morality of killing in this film. It definitely deserves seeing.

“We each owe a death – there are no exceptions – but, oh God, sometimes the Green Mile seems so long.”