So I watched A Beautiful Mind… 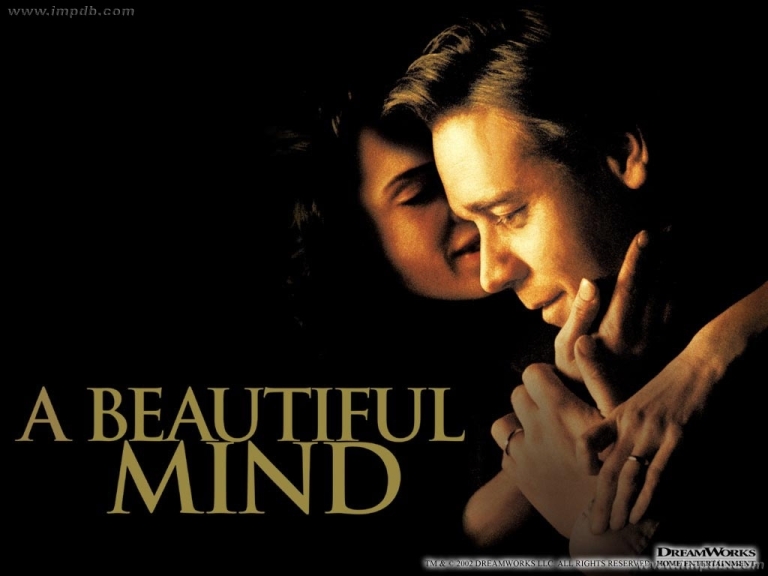 This is one of my favourite films of all time and certainly one of the best biopics ever made. It’s difficult to comment on the reasons why I love this film without verging into spoiler territory. I’ll try to be as descriptive as possible without ruining the film for people who haven’t seen it.

Okay, basic plot: John Nash (Russel Crowe), a reclusive, genius mathematician begins his graduate studies at Princeton. John refuses to attend any classes or complete school assignments believing that they will dull his mind and inhibit him from coming up with an original idea that can change his field. John’s amazing mind and mathematical skills lead to success but he believes he could (and should) be doing more. John’s wishes are granted when William Archer (Ed Harris) – a Government spy – recruits Nash to work on deciphering Soviet codes. John’s mission causes him to fear for the safety of him and his wife, Alicia (Jennifer Connelly). Though blessed with a truly remarkable mind, John’s mind is secretly his enemy as his work takes him from the logical and scientific to the paranoid and delusional. 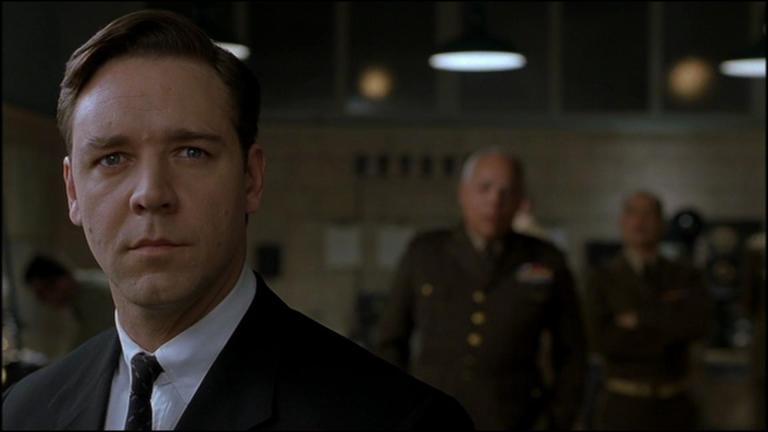 The reason why this film functions so well is because it understands the purpose of a biopic. A biopic is not a documentary; you’re not supposed to be able to write a factual thesis about the character after watching it. It’s a story. It needs to entertain you and, yes, inform you; but not only inform you about a person’s achievements and life but also their spirit. As I was researching this film I found out that it received criticism because it omitted and altered certain aspects of Nash’s life. I think that’s what every biopic should do. It’s impossible, nay, boring to accurately depict every aspect of a person’s life. Life is amazing but it’s fulled with many mundane moments that the audience does not need to be privy to. A biopic needs to be a streamlined summary and I praise this film’s filmmakers for making the decision to cut out and sensationalise certain moments for our viewing pleasure.

Akiva Goldsman crafts a beautiful script filled with gripping dialogue. The film showcases forty-seven years of Nash’s life and there’s a wonderful precision to the moments we are shown. We see the important moments that shape and define Nash as a man but the film doesn’t feel bloated and overstuffed with information. It’s a balance that can be tricky to reach but one that this film manages with elegance and grace. Of course, director Ron Howard, also deserves praise. Howard creates a well-paced and beautifully shot film that – despite being over two hours long – never feels dragged out or boring. There are great lighting choices – from bright, colour scenes to dark, sober hues – that Howard makes throughout the film that ensures that the aesthetic look of the scene matches its tone. James Horner who composed this film’s score does a brilliant job! In the same way that Ron Howard ensures that the look of the scene matches its content; Horner produces a score that heightens and amplifies the story.

This film isn’t just a success in terms of what happens behind the camera but also in terms of what happens in front of it. Russel Crowe and Jennifer Connelly are SENSATIONAL! Crowe throws himself into the character of Nash. Nash – as portrayed in this film – has rather conspicuous idiosyncrasies and an almost Rain-Manesque swagger to him. These are obviously easy to acknowledge and appreciate but it’s in the subtle moments where Crowe’s class becomes truly evident. He has an understanding and control of the character that is lovely to behold. He never lets it get away from him and becomes almost unrecognisable at times. 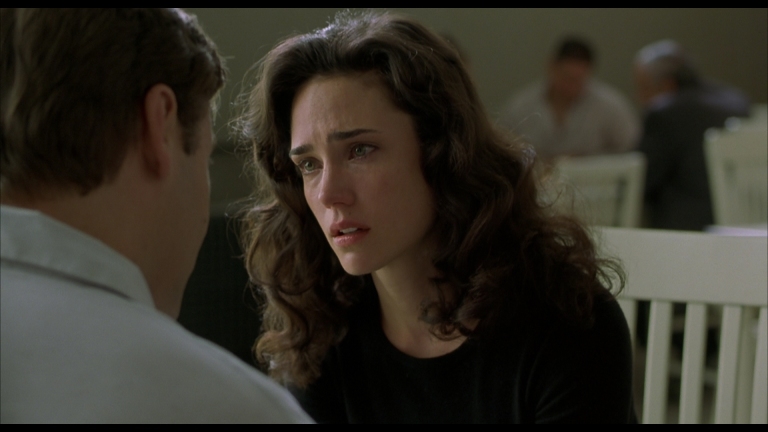 Both Crowe and Connelly were nominated for Academy Awards in the Best Actor and Best Supporting Actress categories, respectively. Crowe lost out to Denzel Washington in Training Day but Connelly managed to claim the win. It’s a win that is certainly well deserved. Connelly’s character, Alicia, is a woman who falls in love with a brilliant man but is forced to watch as he crumbles away in front of her. She’s obliged to stay and there are moments she wishes she could leave.  She portrays the conflict in the character with poise and elegance. You see both a devoted wife who honours her vows to her husband but also a desperate woman trapped in a prison of her own making. It’s a beautiful performance. There’s a moment where she loses her cool and takes her frustations out on a bathroom mirror that I absolutely loved. I think the struggle her character is perfectly summed up in the following quote:

Christopher Plummer has a small but vital role in this film as Dr Rosen – John’s psychiatrist. He doesn’t have much screentime but Plummer is a class act who does wonders. Paul Bettany and Ed Harris also deserve a moment of recognition for their work in this film. I’ve always felt Bettany doesn’t get the praise or roles he deserves. He’s a bright spark in this film and although not real is the realest connection the reclusive John has to the human world.

Overall, A Beautiful Mind is a triumph! It’s well-made from its script, to the lens the director tells the story through, to the actors that bring the story to life. It’s definitely worth watching. You may not leave it with a deeper understanding of game theory or Nash’s contributions to the world of Mathematics and Economics; but you will leave it with a deeper understanding and appreciation of the power of the human spirit.