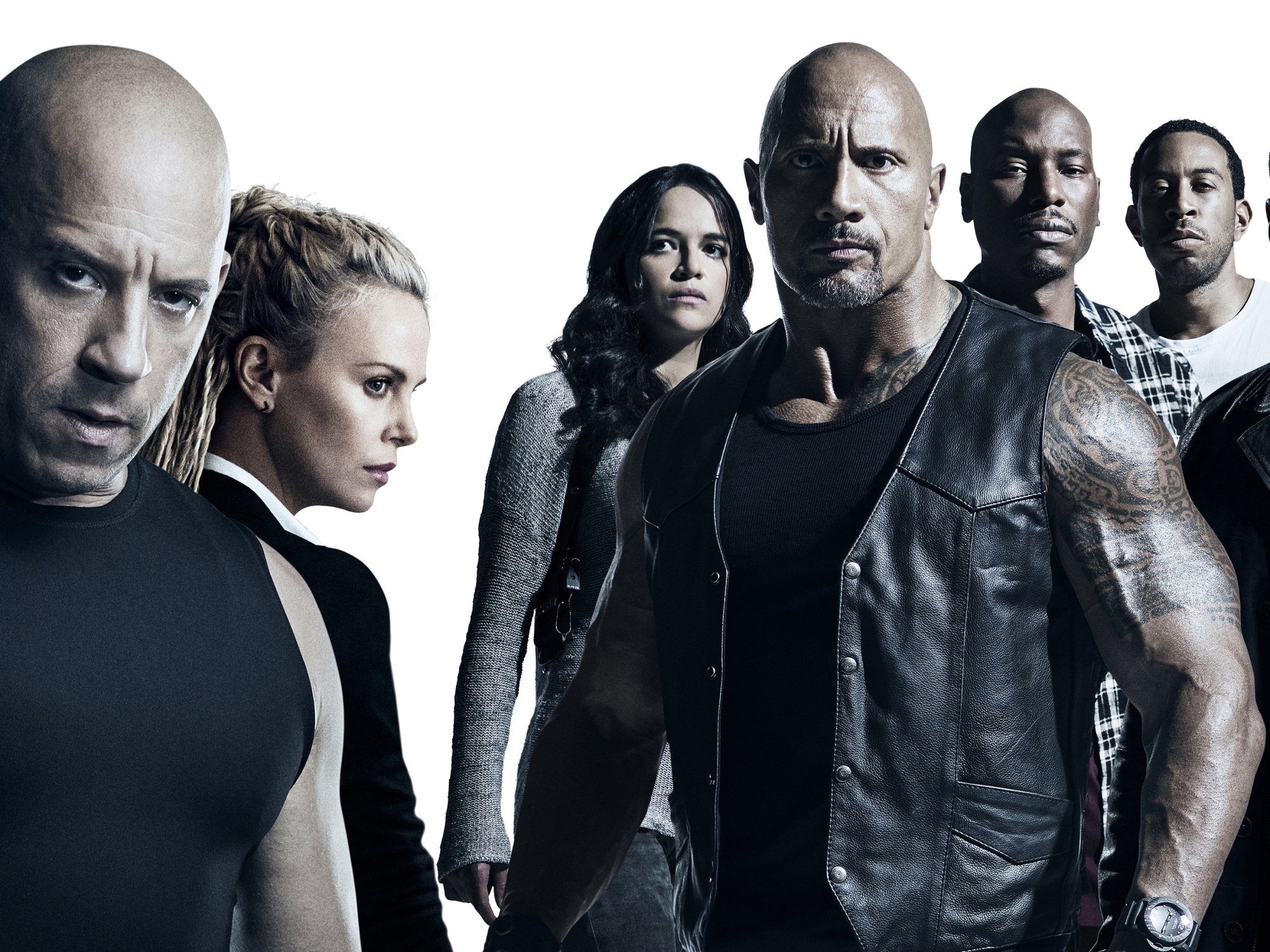 So I watched The Fate of the Furious…

A friend of mine and his wife have an interesting arrangement – whenever a new Fast and Furious movie comes out, he gets a night out with the boys to watch it and whenever Justin Bieber comes to town, she gets a night with the girls. They’re both afforded a night of fun, mindless entertainment and both spared a night of feigning interest in something they care very little about so it’s a win-win for everyone except your brain cells.

Okay, basic plot: Having reignited their romantic relationship, Dominic Torreto (Vin Diesel) and Letty Ortiz (Michelle Rodriguez) are enjoying their honeymoon in Havana. One day Dom is approached by a mysterious stranger known only as Cipher (Charlize Theron). Cipher extorts Dom into coming to work for her and betraying his team. With no idea about what power Cipher has over Dom, the team is forced to take Dom down and break apart their family. 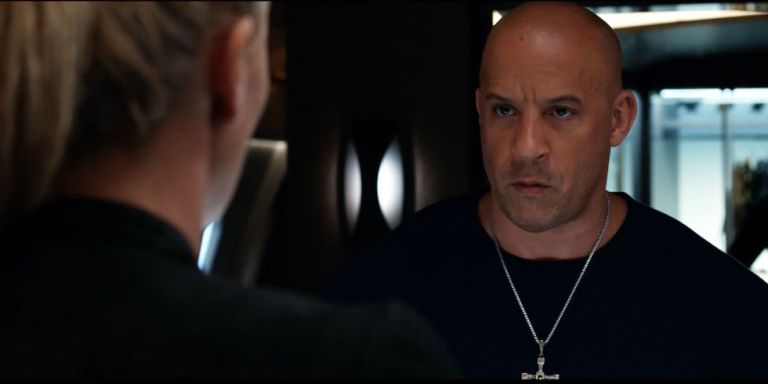 I’m a huge advocate of individualising reviews and judging a movie based on its distinctive style and singular goals. I wouldn’t grade this film on the same curve I used to grade Citizen Kane. The point I’m trying to make here is that you have to walk into this movie, appreciate this movie and judge this movie by what it was trying to do; which is, be a fun, stunt spectacular with little to no story. This film definitely succeeded in that respect but I think it’s gone too far. The best Fast and Furious movies – in my opinion – were the first, the fifth and the sixth. The reason I say that they were the best was because they had the best balance. You had outrageous stunts complimented with worthwhile story. The story wasn’t going to win any Oscars or anything but there was enough for you to invest your heart in.

The problem I’ve found with the most recent Fast & Furious movies (namely Furious 7 & and Fate of the Furious) is that they seem to have a severe case of something I like to call ‘Sequel Sickness’. This is a disease where each installment in a franchise progressively loses the little story it had and goes from a well-differentiated, fun, action movie to a clump of discordant action set-pieces. Other famous examples of movies suffering from this disease are Mission Impossible: Rogue Nation, all the sequels to the original Jurassic Park and all the sequels to the original Pirates of the Caribbean. It’s rampant, we may be looking at a pandemic.

I criticise this film heavily but I’d be lying if I said I didn’t enjoy it. It’s a mess but it is beautiful to watch at times. There are great moments of action, moments that will make your jaw drop even. Fate of the Furious continues the credo of Furious 7 by consistently trying to raise the bar in terms of vehicular mayhem. It is fun to watch but this marvelous action is undercut by three factors. Firstly, Mad Max: Fury Road came out two years ago and showed us that you can have stunning and extravagant vehicle carnage without the need for CGI. The action in Fury Road felt real because it looked real because it was real! In contrast, even though Fate of the Furious has exciting moments, you can clearly see the blue screen it was shot in front of.

This leads me to my second point, because this film’s action is created by a blue screen, there’s no tangible sense of danger. This is further heightened by the film’s poor story. It’s been stretched to a point where it’s no longer just pushing the limits; it’s no longer unbelievable, it’s straight nonsense! People get hit by cars, get shot, get blown up and walk away from it like they just got a hug from mommy. The characters are made to be invincible and you, therefore, know that they can’t die let alone be hurt so every action sequence feels hollow because there’s nothing at stake really.

Thirdly, when I think about the first Fast and Furious movie and my favourite action scene, I think back to the opening of the movie where one of the characters drives their car beneath a truck. It’s a complex skill that – at the time – was like anything I’d ever seen. This scene took real skill but the beauty of that scene is its simplicity. There aren’t a million explosions, submarines aren’t flying out of the ice. In its attempt to create grander and more expansive action, Fast and Furious has complicated things and lost the simplicity that made it work in the first place.

Returning to this film’s ‘story’, I don’t understand why this franchise is so reluctant to create independent villains. Ever since Fast and Furious 6, every villain in the franchise has somehow being linked to the events of the previous film. This might to wading into spoiler territory but Charlize Theron’s Cipher is definitely connected to this film’s predecessors. It’s annoying because it creates the sense that the filmmakers believe that fans won’t be able to sufficiently hate/enjoy a villain unless they’re somehow responsible for every single event of the characters’ lives. It’s a mistake that Spectre made and unfortunately one that this film and the franchise continue to make.

I’ve criticised this film heavily but I have to praise three of its stars. Charlize Theron is a class actress and her presence in this film truly does uplift its overall quality. Although her character Cipher is, unnecessarily, linked to the previous films in the franchise; Theron does a fantastic job establishing her in this film. She is wicked and immense and though its clear Theron is in this franchise for the paycheque and fun, she still makes the character memorable. The other two stars who deserve praise are Jason Statham and Dwayne Johnson. The two are colossal action stars and have real charm and swagger. Whether they’re trading blows or trash-talking, any scene with them on screen is a joy to watch.

I think I’ve sufficiently explained why this movie won’t be winning Best Picture at next year’s Oscars. I do though have one shot of criticism left to fire. A shot I’ve reserved for director, F. Gary Gray. Gray’s hand is often far too heavy in the editing of this film. There are superfluous moments of slow-motion that both fail to heighten or better display the action.  He also borrows heavily from James Wan’s bag of tricks with the rotational camera angles he uses in this film. Of course the action is often shot with unnecessary amounts of shaky-cam and filled with far too many cuts but I’ve come to expect that as a rule in any modern day action film.

Overall, Fate of the Furious won’t be winning any Oscars in the future nor does it try to. I think the franchise has lost its balance and needs to skew towards a better story in the next installment. This film’s already made over a billion dollars and Universal has already greenlit two more additions to the franchise so Fast and Furious isn’t going anywhere; problem is that it’s going nowhere slowly. If you’re a fan of the franchise or any of its stars, it’s worth seeing but you’ll miss nothing if you give it a skip 3/10

4 thoughts on “The Fate of the Furious Review”