So I watched Baywatch… 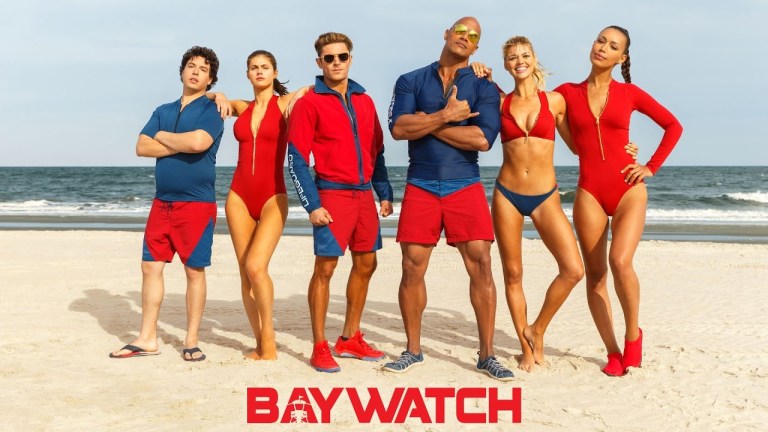 I grew up watching Baywatch but – being a child, I suppose – I never noticed how illogical or far-fetched its plot was. I just assumed all lifeguards disarmed nuclear bombs and somehow had the special ability to run in slow motion. It was definitely the ’90s – a simpler time – and this film definitely had me reminiscing for simpler times.

Okay, basic plot: Mitch Buchannon (Dwayne Johnson) is the head of an elite lifeguard programme, called Baywatch, that protects the beaches of Emerald Bay. Mitch works with fellow lifeguard veterans, Stephanie Holden (Ilfenesh Hadera) and C.J. Parker (Kelly Rohrbach). Baywatch is in danger of losing its funding and Mitch’s superiors think that recruiting disgraced Olympian swimmer Matt Brody (Zac Efron) may elevate Baywatch’s image and security. Brody thinks the whole Baywatch programme is a joke and refuses to take Mitch or his crew seriously. Brody soon discovers just how important Baywatch is when this group of lifeguards is the only thing standing in the way of a ruthless druglord taking over the beach.

The best thing about this film is that it knows exactly what it wants to be and, just as importantly, where its strengths lie. This isn’t some gritty, modern, accurate retelling of a story like most modern remakes try to be. It keeps things light-hearted and is actually a parody more than a remake. It takes the tropes that made the original TV show so popular and consistently mocks them. From the lifeguards running in slow-motion to the mere fact that they think they’re police officers. It’s all made fun of but as all great parodies do, the film mocks these things but also commits them itself.

Screenwriters, Damian Shannon and Mark Swift, deserve credit for the truly hilarious script they produce. As I alluded to earlier, a great parody mocks the original genre while still setting itself apart as an entertaining addition to said genre. This film felt like watching an episode of the original TV series but had a freshness and modern feel to it. You know how I know this film was well-written? If I had never watched Baywatch on TV, I still would have enjoyed this film. It doesn’t use the original as a crutch so your enjoyment of it is never reliant on your memory of the TV show. It’s like meeting someone, enjoying them as an individual and then meeting their father, and realising that they’re a chip off the old block. Baywatch works beautifully on its own and just as well when viewed in the context of its predecessor.

Now Baywatch wouldn’t quite be Baywatch if it didn’t have beautifully toned people in swimsuits for us to drool over. Whether you’re into men or women, there’s plenty for you to admire. My personal favourites were Ilfenesh Hadera and Zac Efron. It should be illegal for people to look that amazing. But the actors in this film don’t just look good, they also put in some entertaining performances. There are no weak links in this chain and this really impressed me. The script has a plethora of nostalgic one-liners which the cast deliver wonderfully. Dwayne Johnson is not only the leader in terms of the film’s story but also in regard to its humour. You can see Johnson is having a ton of fun in the role (as are all his co-stars) and he gives one of my favourite performances of his.

Jon Bass who stars as Ronnie – the atypical idea of what you’d expect a lifeguard to look like – had me in stitches. He was responsible for three of the funniest scenes in the movie. I was actually watching interviews with the cast and they all said that one of these three scenes was their favourite scene in the whole movie. Once you see the hilarious way Ronnie tries to hide…um…let’s call it a piece of drift wood, you’ll be in agreement.

Overall, Baywatch is highly entertaining. It’s fun, makes you laugh and pays homage to the original in a great way. I know it got plenty of flak but it did also make a lot of money so I’m hoping we get a sequel. Go watch this movie, it’s worth it 8/10