Hmm, it’s been a while since I’ve done this…how’s it go again? Oh yeah…

So I watched Solo: A Star Wars Story 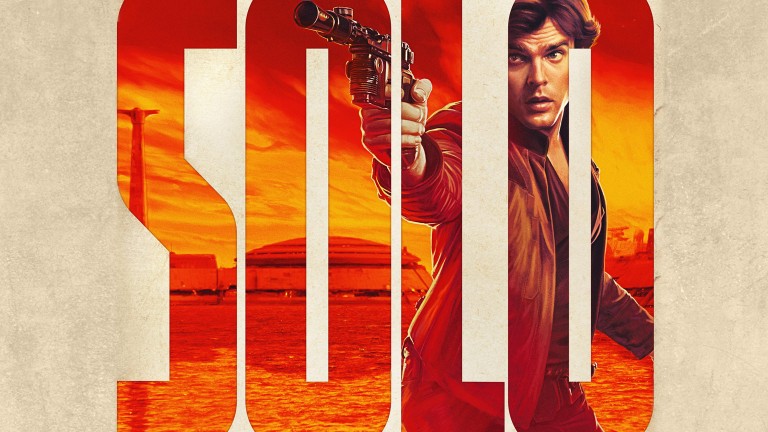 Prequels and origin stories aren’t exactly anything new in today’s film climate but they’re definitely still risky. My problem with them is that they often try to over-explain every single feature about a character you love. They can be so bogged down in creating ties to the original character/movie that they forget to create inspiring and remarkable characters/moments themselves. Luckily, Solo avoids falling into this trap and gives us an original and fresh addition to the Star Wars Anthology.

Okay, basic plot: Han Solo (Alden Ehrenreich) is a young hustler looking to make his first big score. Although a skilled pilot, Solo’s arrogance and tendency to speak before he thinks lands him up in the debt of Dryden Vos (Paul Bettany) – a vicious crime lord. In order to settle his debt, Solo must undertake a near impossible heist with the help of new comrade Chewbacca (Joonas Suotamo) and crimimal mentor Tobias Beckett (Woody Harrelson).

I think the thing I like most about these Star Wars anthology films like Rogue One – and now, Solo – is that they give us a fresh perspective on the idea of Star Wars. When we think of Star Wars, we think of The Force, Lightsabers, this grand battle between The Light and The Dark; but as these anthology films are proving, there are a plethora of other stories to be told. The films are breaking the mould and instead of desperately trying to stick to the original formula in hopes that our nostalgia tricks us into liking the stories, they’re branching out and creating something new.

Solo feels like a Western set in space. It’s a time of outlaws and renegades where lawlessness rules and the time it takes you to pull your gun is the difference between life and death. The tone of the film feels very close to the originals especially A New Hope. It’s almost like an expanded view of the cantina scene in A New Hope where saying the wrong thing can get your arm chopped off or earn you a blaster shot to the chest. It’s grungey, everything is a scramble to survive, everything is a hustle to escape. It adds great intensity and tension to the film.

I really have to tip my hat to screenwriting team Lawrence and Jonathan Kasdan who create a script that perfectly embodies what a prequel should be. It needs to tie into the original but be a standalone project which gives us a glimpse into what made our favourite characters who they are. This is one of the things I found most impressive about Solo. It manages to grip you and make you invest in the characters. Even though you know Han and Chewie obviously survive the events of this movie; you’re still worried what happens to them, you’re still engaged. This is due to the great work that the Kasdans do in crafting this film’s script and story but also to the way director, Ron Howard constructs the film. Howard is an incredibly versatile director and no matter what the film always manages to capture the human drama at the heart of the story. It’s this human drama which propels the film and keeps your interest locked.

Another thing which keeps your interest locked is the brilliant cast that bring this film to life. Alden Ehrenreich is the perfect (young) Han Solo. Just like the film’s writers, Ehrenreich doesn’t get caught up in trying to replicate the original Han Solo but instead endeavours to make a new version of the character. It’s really fun to watch Ehrenreich’s performance because you can see that he has complete control and understanding of his version of Solo. The film and the character are made as if no other Star Wars movies or versions of the characters have ever existed, they make you fall in love with him from scratch and don’t rely on your pre-existing love or nostalgia.

I also have to pick out Donald Glover’s performance as young Lando Calrissian for praise. I was watching a recent interview Glover gave about the character and advice he’d received from Bill Dee Williams. Glover jokes that Williams didn’t really give him too much direction and just simply said, “I don’t know, just be charming…” and I think that’s advice Glover definitely took to heart. He is suave, smooth as silk and just the perfect depiction of what a young Lando would have been. This entire film’s cast is phenomenal with Woody Harrelson and Emilia Clarke both shining in their roles. I especially liked Harrelson’s Tobias Beckett whom I viewed being to Han Solo what Fagin was to Oliver Twist.

As is Star Wars tradition, there’s also a plucky droid who delivers comic relief. This time around called L3-37 (or just L3) and voiced by Phoebe Waller-Bridge. L3 is really funny as intended and poses some interest questions about droid sexuality.

Overall, Solo is a well-made film from start to finish. The script forms a fantastic foundation from which the talented cast and insightful director make an enjoyable film. The only real criticism I have for it is that its runtime at over 2 hours is a bit unnecessary. I think shaving off ten minutes would have made the film even better but nonetheless it’s still a great time at the cinema 8/10