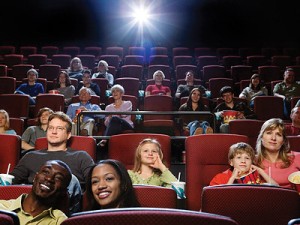 I love watching movies. Whether it’s going to the cinema or lounging out the on couch, I love the escapism a good (and sometimes a bad) film provides. I remember the first time I went to watch a movie at the the cinema. It was the first Spiderman, I was twelve, and the experience was a revelation. I mean the movie was great but I loved the experience. There were no commercial breaks, no neighbours knocking on doors, no parents ordering you to do chores – everyone was there for one purpose (well two, if you count finding a dark room to kiss in a purpose).

I had always loved watching movies and most of my weekends were spent in front of a tv but seeing a movie on the big screen was a game changer. The cinema wasn’t overly impressive: the seats weren’t made for comfort but they were bearable and the crowd was quiet. From then on almost every weekend was spent in a cinema. Most kids wanted bikes and ponies as kids, I wanted a movie ticket.

Eleven years later and I still feed odd if I haven’t been to a cinema atleast once in the last two weeks. Generally I like going alone cause people tend to have poor cinema etiquette (i.e. asking me to explain the same plot that I’m also trying to piece together) but in the last few years I have enjoyed watching movies with friends or girls I’m dating because I like to discuss the film.

Even the bad movies I’ve seen at the cinema have been worthwhile – mainly because I watched them with friends and we were chirp through the whole thing.

Point I’m trying to make is that movies are meant to be watched at the cinema. Movies are made for big screens. A laptop screen will never give you the visual experience a cinema can. No, this blog isn’t sponsored by a movie studio trying to increase ticket sales, it’s just the natural order of things. Beer needs to be cold, pizza hot and movies need to be seen at the cinema. I’m not saying I won’t drink a warm beer or eat some pizza straight out the fridge but I know when I do it that I’m not enjoying it the right way. Enjoy movies the right way.

2 thoughts on “My first cinema experience”