So I watched Dracula Untold… 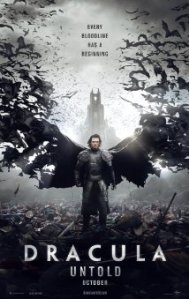 We live in a world of sequels and movie franchises. This is great, at times, because some characters and stories really do deserve more than one movie; but often it’s frustrating because it leads to movies that are just setups and don’t have enough story to stand on their own. Dracula Untold is one of those movies that suffers from this a bit. Don’t get me wrong, this movie is entertaining and the story is one worth telling but the plot has major holes in it that only a sequel will be able to fill.

Basic plot: Luke Evans plays Vlad Tepes – a Romanian prince who turns to the powers of darkness to protect his people and family from the demands of a Turkish overlord (played surprisingly well by Dominic Cooper). Vlad “sells his soul” in exchange for the powers of a mysterious creature that lives in the dark mountains of his kingdom. Vlad becomes a vampire and starts kicking ass while trying to resist the bloodlust that comes with his power.

I know we’re all sick of reboots and origin stories but I really liked this movie. I’ve always been a fan of Count Dracula – he’s my favourite kind of villain: charming and suave but menacing. Luke Evans does a really great job bringing, not only the monster that Dracula is to life, but also the family man who is driven to the darkness by his desire to protect those he loves.

The script is probably the best thing about this movie. Whenever you watch a movie set in “the ancient times” (as I like to call them) you expect great dialogue filled with majestic metaphors and eloquent speech. The movie delivers on this in a big way. The guy behind me kept going “wow” whenever a great line was said, and though he annoyed me greatly, I have to agree that the dialogue in the script was very often “wow”. My favourite line in the movie, probably been Vlad saying “men don’t fear swords, they fear monsters”.

My main problem with this movie is the same problem I have with every Superman movie and The Matrix. Once the hero gains this tremendous power and shows that they can’t be matched, how do you create any sense of peril? How do you explain why the hero doesn’t just destroy everything in his way right after he gets his power? The answer is you don’t and the only reason Dracula doesn’t kill all of his enemies within five minutes of gaining his power is because then the movie would have been an hour shorter.

Another problem is that this movie is clearly setting up for a sequel. It doesn’t explain a lot of plot elements and just leaves you wondering “huh?” at the end of the movie. Don’t directors and screenwriters realise that if you make a great standalone movie, it will get a sequel because we wanna see more of the same quality? Sequels that simply explain things that could have been made clear in the first movie are like a girl inviting you to her place, getting you all hot, then leaving the room as you’re getting naked and coming back two years later and fucking your brains out. STOP DOING THIS SHIT!

Overall, this movie is really entertaining. I wish the movie had, had enough confidence to stand on its own two feet and produce a great movie that doesn’t need a sequel. It isn’t worth a trip to the cinema unless you’re a HUGE fan of vampire movies, I’d wait till it hits the dvd store 6/10