So I watched The November Man 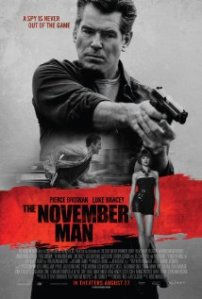 I actually walked into this movie with some expectation –  I had liked Brosnan as James Bond and I was hoping to see his charm and wit spliced into another spy thriller. I did not get that.

So basic plot: Brosnan plays a CIA agent Peter Devereaux, retires from the spy game but is forced to return to save someone blah blah blah, and has to face up against someone he trained blah blah blah…stop me if you’ve heard this one before. The movie is so incredibly cliche. predictable and never gets your heart racing. The script feels like it was taken from the crayon-wielding hands of a three year old and the plot is so incredibly thin that you can actually see the movies it’s trying to rip off. The dialogue is stale and flat and the one-liners (that Brosnan usually pulls off so nonchalantly) just make you wish that you were off doing anything else but watching this movie.

The movie never gives you time to properly connect or even learn character’s names. You know that feeling when you walk into a movie half an hour late and have to try to work out the plot and who the characters are; that’s what this movie makes you feel like. Characters are hastily introduced, poorly developed and their motivations are never really explained. All this leads to is a movie full of characters that you don’t give a shit about. Not that the actors do anything to actually make the characters they’re portraying memorable. The list of characters in this movie goes: Old master spy, hothead young spy, CIA boss, girl with tragic past who old master spy must protect, generic corrupt Russian politician and generic Russian assassin. There’s literally nothing creative about any of these characters.

The movie tries to create tension and drama through the relationship between Devereaux and David Mason (an agent Devereaux trained) but this, like every else in the movie, falls short of being entertaining. Firstly, Mason is severely outclassed so you never feel like he can actually beat Devereaux, added to this the way the movie just glides passed their relationship and fails to make you believe these two men were friends, master and apprentice or even people who knew each other’s names; you end up just not caring who wins. There were times when the movie tried to explore the ‘cat and mouse game’ of student versus master and it actually was fun to watch but it happens so rarely that it fails to redeem the movie.

The action scenes are so pedestrian and uninspired. I think the people who made this movie went and watched a bunch of action movies, made a checklist of things they liked and just randomly inserted them into this movie without trying to make anything coherent or innovative. Car chase – check. Close hand to hand combat – check. Student versus master – check. Corrupt government officials – check. Spies who take orders from corrupt governments every day but for the purpose of this movie will grow consciences and do the right thing – check.

The movie is just a collection of cliches strung together by a nonsensical plot.

I wouldn’t suggest anybody watch this movie. It never gets going or tries to entertain you. Not worth a trip to the cinema, the dvd store or the time it’ll take it to disappoint you. 4/10