We’ve all watched a movie about a certain character but fell in love with one of the supporting cast and wished we could see more of these side characters. Sometimes they’re more mysterious, dangerous or have some of the best pieces or dialogue in the movie. Here’s a list of 6 characters that I’d love to see in spinoff movies.

Before I begin, I’d like to put in an honourary mention to Glen Coco from Mean Girls. He got two candy canes! I wanna see more Glen Coca “you go, Glen Coco!”

#6 Rita “The Angel of Verdun” Vrataski 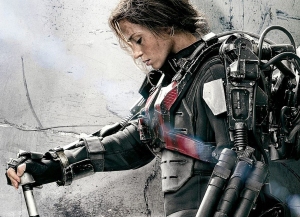 It’s always a great break of pace seeing a strong female lead in an action movie. Edge of Tomorrow was probably the most underrated movie of 2014 and Emily Blunt as Rita Vrataski was amazing. She’s introduced as this seasoned war hero who almost single-handedly cleared an entire city of the invading alien Mimics in The Battle of Verdun. We never get to see this battle and I think it would make for a great movie. If the prequel route seems to similar to the original, a sequel focusing on Rita could also work amazingly well.

#5 The Genie from Aladdin 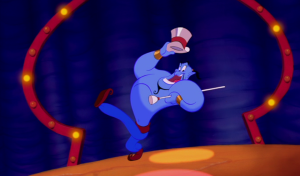 Genie really stole the show in this movie. Combining the idea of an all-powerful genie with the magical talent of the late Robin Williams was utter genius. Williams really infused his eccentric, manic energy into the character but I think the character can live on without Williams. In the animated tv series (which I grew up watching and loving) the genie was voiced by Dan Castellaneta and I think he did a superb job. The genie was as zany and loveable as in the movie. At the end of Aladdin we see genie flying off to new adventures and I’d love to see where he ends up.

I think almost every character in the Star Wars franchise deserves a standalone movie. Yoda, Mace Windu, Obi-Wan Kenobi, even Boba’s father Jango could be the star of his own movie. Boba is the son of legendary bounty hunter/assassin Jango Fett and sports his father’s trademark jetpack and wrist-mounted lasers. We never really see much of Boba in the original trilogy, we get a hint of his skill in his ability to track the Millennium Falcon in Empire Strikes Back but I’d love to see a lot more. With the Star Wars filmmakers announcing an upcoming series of Anthology movies that will focus on specific characters, I really hope Boba’s story gets told.

Jason Statham reminds me a lot of Bruce Willis in his prime. He’s known as a huge action star but he also has some credible comedic chops. Statham exhibits his great comedic talent to perfection in Paul Feig’s Spy. RIck Ford, with his penchant for turtlenecks and doing more talking than actual spy work, reminded me a lot of Sterling Archer from the animated tv series Archer. He has some of the funniest pieces of dialogue in the movie and Statham just perfectly sells the idea of a arrogant spy who’s bark is worse than his bite.

No, not the poorly acted one from Age of Ultron with the most annoying European accent since Kate Beckinsale in Val Helsing; the AWESOME one from X men: Days of Future Past. You know a character is awesome when he’s in a movie for less than 5 minutes but he’s all anyone can talk about. That kitchen scene in Days of Future Past was arguably the best part of the movie. Before the movie a lot of people were criticising the look and feel of the character but I don’t think anyone can say they didn’t fall in love with the character after this movie. It didn’t make sense why the X men didn’t utilise him in the rest of the movie and it wouldn’t make sense if he didn’t appear in the franchise again.

Charlize Theron absolutely stole the show in Mad Max: Fury Road. The spirit and intensity she brought to this character was electrifying. There’s been a call for stronger female leads and I think Theron delivers a performance here that is comparable to Sigourney Weavey’s Ripley and Linda Hamilton’s Sarah Connor. She’s powerful, unapologetic and manages to kick more ass with one hand than most people could with seven. There’s so many stories that could be explored with this character: how did she lose her hand? How did she rise up to Imperator in such a male-dominated world? How many times did she try and fail to reach the land of many mothers? You could also go with a straight sequel that explores the new challenges that she’ll have to face after the end of Fury Road.

Well that’s my list of characters who deserve spinoffs. Did I miss anyone? Leave a comment below.