So I watched Terminator: Salvation…

This movie is probably the most ‘un-Terminator’ movie of the franchise. There’s no Arnold Schwarzenegger or time travel and the movie focuses on the actual war between Skynet and The Human Resistance instead of its prevention. I think this film received more criticism than it deserved and I actually enjoyed it a lot.

Okay, basic plot: you know those dream sequences in the first three Terminator movies that show scenes of a post-apocalyptic Los Angeles where Terminators walk streets lined with human skulls? Well, that’s basically the plot of this movie.

I’m actually a big fan of this movie. I think the Terminator series needed a departure from the traditional plot of the first three movies. We needed something fresh and a movie focused on the war was the next logical step. We’d seen John Connor as a child, a man, we now needed to see him as a soldier and leader in the war. I liked the resolve and mettle that Christian Bale brought to the character of Connor. Bale’s performance at times is a little wooden but overall he does a great job portraying a John Connor we haven’t heard too much about. This movie shows the transitional period between John being a young adult trying to escape his destiny and him fulfilling his potential and defeating Skynet.

I thought the supporting cast (with the exception of Common – seriously, who cast that guy?) in this movie also put in some entertaining performances. Anton Yelchin stars as a teenage Kyle Reese and I found his version of the character more engaging and consistent than Michael Biehn’s original. Sam Worthington is also in this movie and he plays…well I can’t really tell you cause it would spoil things but let’s just say he’s a tough guy who hangs out with Kyle for the first part of the movie. I thought he was great in this movie and had this quiet intensity which was perfectly suited for his character. Sure the plot around his character (and to be honest the entire movie) is a bit of an illogical mess but Worthington does a good job delivering the goods. 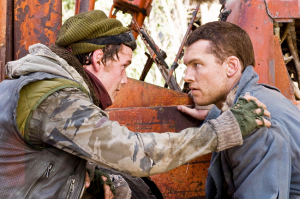 The look and feel of the movie is also amazing. We get to see what the world looks like after Judgement Day and how human beings are trying to survive the machines’ constant assaults. The world is a wasteland and you feel that struggle. This movie is lacking the charm of its predecessors and I think that’s down to Schwarzenegger’s absence. The tone is very serious and there’s hardly any levity in it at all. There are a few one-liners that pay homage to the originals but this movie does try to set itself apart as a standalone.

Overall, there are some great action sequences and although this movie doesn’t dazzle you, it is a solid addition to the franchise. It stands on its own two feet and is different enough from The Terminator and T2 to avoid you constantly comparing it to them, worth a watch 7/10