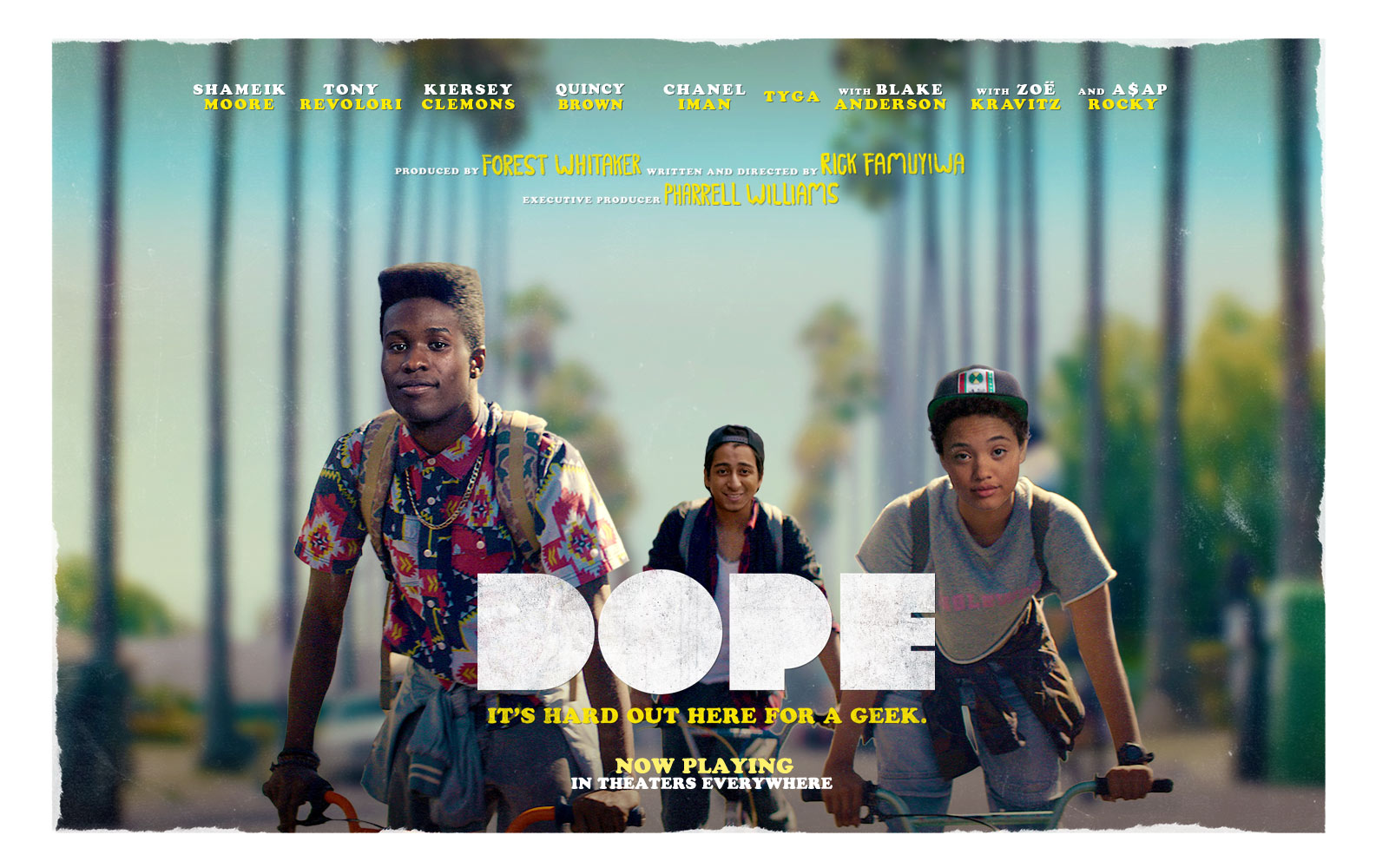 So I watched Dope…

I’ve been waiting for this movie to be released in my country for what feels like ages now. Funny enough I didn’t ever watch this movie’s trailer or even read a synopsis. I just saw a few images and posters online and couldn’t wait to see it. I think there’s definitely an appeal in skipping a film’s trailer and just going straight to see it. You go in with a much more open mind and zero expectations and, as a result, a smaller chance of being disappointed and a greater chance of being blown away.

Okay, basic plot: Malcolm is a 90’s hip-hop geek and all-round nerd. He gets good grades, stays out of trouble and is in a punk band with his two best friends – Jib and Diggy. Malcolm is all set to leave the confides of his poor neighbourhood and become a Harvard man. His plans take an unexpected turn when, after a run-in with a local drug dealer, Malcolm finds himself in possession of a bag full of ecstasy. When Malcolm tries to return the bag he’s told that since he took ownership of the bag, the burden of selling the drugs in it is now his responsibility and if he fails to sell the bag’s contents, his life is going to come to an abrupt halt. Malcolm and his friends must now use their nerdy knowledge and lack of street smarts to become drug dealers and clear the stash of ecstasy whilst still dealing with all the problems that come with being geeks. It’s basically Breaking Bad…but without Jesse saying “bitch” every two seconds.

This movie is well-named. It’s so different from the hoard of movies I’ve seen over the past few years. Yes, elements of it are well-known and familiar but they are presented in unbelievably innovative ways. This movie is like a tasting plate at a restaurant where they give you a choice of meat cooked in different ways. Essentially it’s all one meal but the presentation is so diverse in each case that every preparation feels unique and that’s what Dope is, it is truly unique. There were so many moments watching this movie where I had to stop and analyse what I was seeing on screen because it was so unlike anything I’ve ever seen. This movie is wacky, zany and wonderfully weird. You never know where the story is going and this unpredictability helps the movie stay exciting and engaging.

As mentioned earlier, Malcolm and his friends are huge fans of 90’s hip-hop and this affects their dress sense and how they talk but it also affects the entire style of the movie. This movie has the vibe and spirit of a 90’s classic but with the sensibility and swagger of a modern day hit. It’s a hipster’s dream in many respects and is a perfect mixture of the two time periods. The movie’s soundtrack is a reflection of this. Germaine Franco who composed this film’s music does a really superb job bringing the soul of the 90’s forth with some older hip-hop classics. The soundtrack also features a few new songs from Pharrell who according to the credits was involved in producing the soundtrack. My appreciation for movie soundtracks has been growing and Dope’s soundtrack is definitely one I plan on getting. 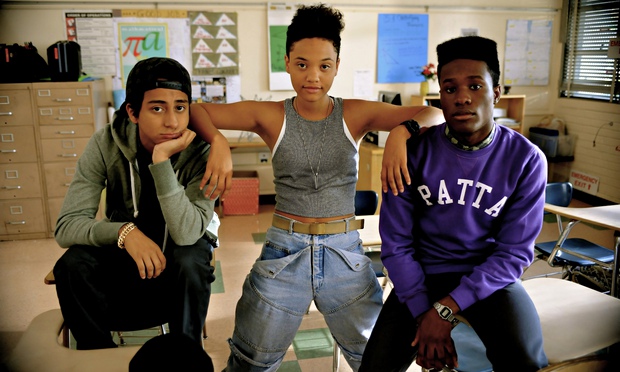 This movie has so many attractive features that it’s difficult to single out a favourite but I think this movie’s actors are its best asset. Shameik Moore, Tony Revolori and Kiersey Clemons who star as Malcolm, Jib and Diggy, respectively, are absolutely amazing. These are some young actors with extraordinary talent and comedic timing that make the movie the delight that it is to watch. I love it when people who are meant to be friends on-screen actually look like they’re friends. I know this sounds like a bit of an obvious feature but after watching the new Fantastic Four, I know that on-screen chemistry isn’t always a given. These three actors are really the bedrock of the film and I loved watching them. Another ‘actor’ who I particularly enjoyed seeing was A$AP Rocky who plays drug dealer, Dom. Look his role isn’t exactly a workshop of thespian skill but Rocky really impressed me with his charm and comedic skill. The ever-improving Zoe Kravitz is also in this movie as the stereotypical ‘hot girl’ our hero needs to woo. Once again it’s a nice, little supporting role for Kravitz and once again she does a great job filling it. I think it’s time we bumped her up to lead. Nothing complicated or too instense, let’s slip her in a romcom and see what happens. I predict good things.

The only real criticism I have for this movie is that its middle third is a bit dull. It resorts to tried-and-tested avenues for its comedy and story whereas the opening third and conclusion have this innovative and daring style to them. It’s still funny, it just isn’t as entertaining.

This movie also addresses racial stereotypes and the class system that still exists in society (whether we want to admit it or not). Thankfully, it does this with a great deal of levity and humour and avoids being preachy and cliche with its message. This whole movie actually reminded me of a Childish Gambino song. Childish Gambino aka Donald Glover is a black geek, very similar to the ones portrayed in this movie and he is actually referenced in this movie as an interest black geeks have. Gambino’s music is infused with tales of his childish and having to deal with society’s expectations of him because of his race. His music, like this movie, challenges that and shows that times have changed, cultures have changed and it’s time for expectations to change.

Overall, when was the last time you watched a movie and said ‘that’s truly original’? I guarantee you’ll say that after watching Dope. It’s funny, thought-provoking and unlike anything I’ve ever seen. I loved it and suggest you go see it, 7/10