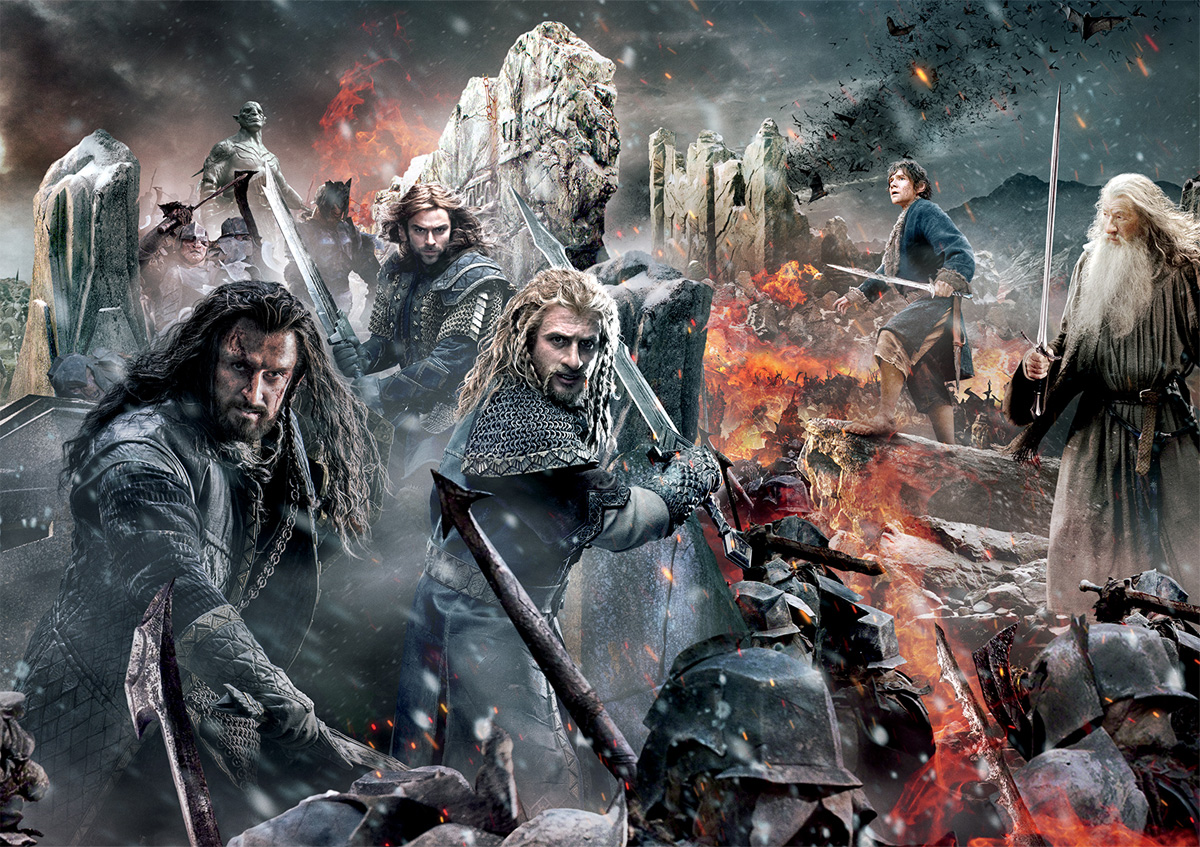 So I watched The Hobbit: The Battle of The Five Armies…

I almost feel like Frodo finally reaching the depths of Mount Doom to deliver the One Ring. I’ve finally watched all Peter Jackson’s films about Middle Earth and I have to say that even though the total run time of The Hobbit Trilogy is near nine hours, I’m still craving a little more Middle Earth action. I think that a Lord of the Rings marathon and review session is in my very near future.

Okay, basic plot: With the kingdom of Erebor reclaimed, Thorin Oakenshield and his company set about searching the treasure trove in the mountain for the Arkenstone – a special jewel that Thorin requires to be considered the true Dwarf King. The lust for the jewel drives Thorin out of his mind and causes him to forsake his honour and friendship to his kin. Soon the news of Thorin’s victory over Smaug spreads across Middle Earth and several armies (man, elf and dwarf alike) march towards Erebor to claim its treasures for themselves. Sauron sees this as a perfect opportunity to launch a surprise attack on the kingdom with his army of Orcs. The different races of Middle Earth must now decide whether to squabble over petty differences or stand together and fight the growing darkness that threatens to shroud the land.

Armies of different races marching on a kingdom? King corrupted by some mystical power? An unknown army of Orcs marching to kill them? Races forced to work together to defeat their mutual enemy? Wasn’t this the exact plot of The Two Towers? All that was missing was for Gimli to show up and have a competition, with Legolas, to see who can kill more Orcs. Yeah, this movie didn’t feel very original, I mean, even The Eagles show up at the end to save the day again! Seriously, what’s the deal with The Eagles? Are they only allowed to show up once and awhile? Is it like a time-share thing? Where Gandalf can only call them for help during the summer? Or is it because J.R.R. Tolkien knew that if The Eagles were a bigger part of the story, he would have only had four chapters of a story instead of four books?

While we’re on the topic of things that don’t make sense in Middle Earth, what’s the deal with Gandalf? By that I mean, what exactly are his powers? He’s a wizard right, so why’s he fight with a sword? Why not use magic? Why not cast an Expelliamus or Patronus or something? Seriously, it confuses me so much because I’m constantly thinking, why doesn’t this guy just conjure a tornado and kill all the Orcs? Wait, is it because then J.R.R. Tolkien would have only had one book? Yeah, I’m going with that.

And lastly (well this isn’t the last non-sensical element I want to discuss but I have to eventually stop and actually review the movie) we’ve been told throughout LOTR and The Hobbit that Elvish blades glow blue when there are Orcs near; but I can think of countless times when Frodo or Bilbo has been standing close enough to an Orc to give him a prostate exam but the blade doesn’t glow. Is it because Peter Jackson forgot that fact or because he didn’t want to spend extra on the special effects budget? But anyway, back to this movie…

When stories that were meant to be told in one movie get split into multiple movies, the last installment is usually the most exciting and action-packed and this holds true in this movie. This movie is basically one battle after the other. You’ve had two movies that were set-ups for this movie’s climatic battle so you can go absolutely crazy on the battle and display ever aspect of it. Unfortunately, there are too many times that this movie doesn’t. Don’t get me wrong, this movie is filled with action and battle scenes; but there are moments when it cuts away from the action to show us characters talking and you find yourself literally begging to see the fighting. There’s one moment in particular, when Thorin is having an existential moment about who he is and what he’s become and how the treasure he sought for so many years has corrupted him; while a battle between an army of DWARVES, ELVES AND ORCS is going on outside. I realise that moment was crucial to the story and to Thorin but, honestly, show me some mystical creatures brawling!

The fight scenes in this movie were much better choreographed than in the last and the actors also performed the choreography with much more authenticity and tenacity. It felt like people could lose, it felt like people were in peril and this adds so much more tension to things. Near the end of the movie, I was on the edge of my seat because you don’t know if our heroes are going to win or not. There are some major character deaths, and not side characters or people whose names we didn’t bother learning, I’m talking about main characters, people you think the filmmakers wouldn’t dare kill because we love them so much. It was really great to watch and had me on edge for the majority of the finale.

Hey, did you know that The Hobbit is the prequel to Lord of the Rings? Well, if you didn’t, Peter Jackson is going to hit you over the head with that fact every chance he gets. There are so many references to LOTR that I’m actually surprised Jackson didn’t just show a trailer for The Fellowship of the Ring halfway into the movie. Actually I wish Gimli had been in this movie because seeing Legolas without his bro is actually quite sad. Plus whatever make-up they used on Orlando Bloom in an attempt to make him look the way he did in LOTR just kinda made him look like he was on too much botux and a little constipated. But maybe his overly-serious nature was just to highlight the shift in his personality that came later on. Either way, I wasn’t a fan.

The acting in this movie is once again terrifically done. Richard Armitage is the real star of this movie as Thorin. His character has more screentime and more profound, emotionally complex moments and Armitage does a great job portraying this. Martin Freeman is once again delightful and charming as Bilbo; but, like I said, everyone pretty much does a great job with their acting in this movie. I can’t fault anybody. One fault I have with this movie is that, the CGI looked like obvious CGI at times. It’s a pity because the majority of the effects in this series have looked extremely life-like.

Overall, The Battle of The Five Armies is my favourite of The Hobbit Trilogy. It’s full of action, has a great sense of conclusion and also resolution. It’s everything that you’ve been waiting for and what you’ve parted with nine hours of your life for. You can’t really enjoy it without watching the first two though so enjoy the nine hours. 8/10