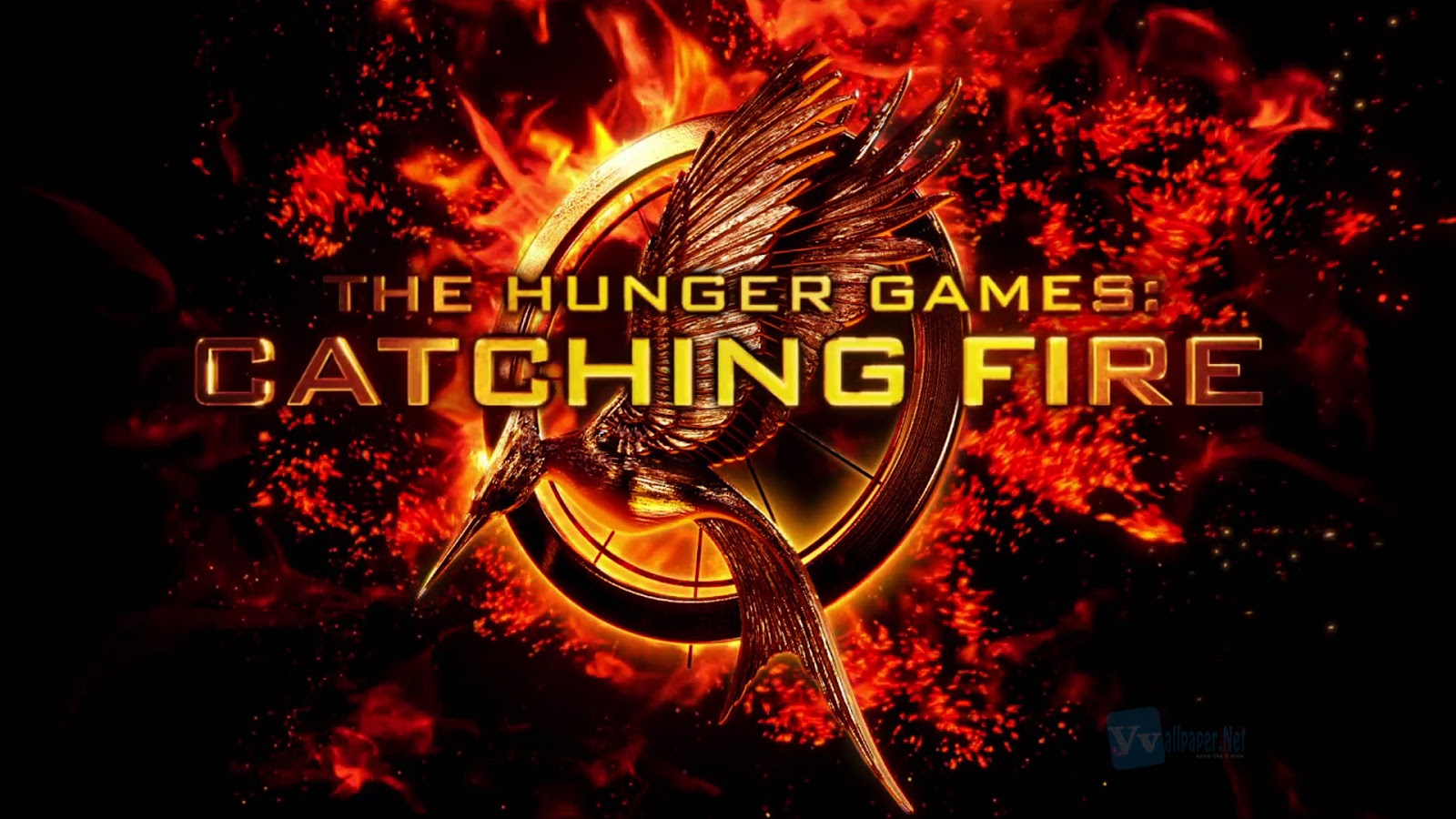 Continuing with The Girl Week Blogathon being hosted by Dell On Movies, here’s my review of the second installment in The Hunger Games franchise. If you wanna be a part of the blogathon, click here. 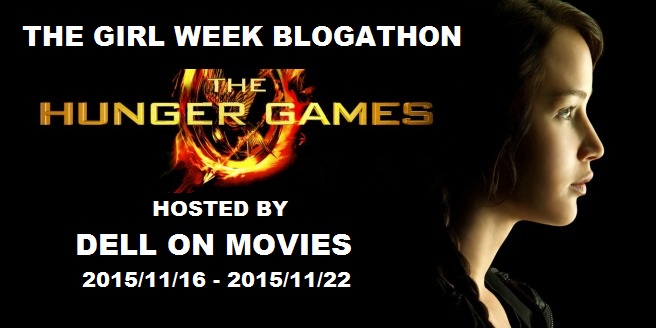 As with the original, I didn’t watch this movie’s trailer or know anything about its plot or new characters. I went in blind and I think the mystery of not knowing and letting the film speak for itself really added something to the experience. This film was the unexpected hit of 2013, for me. I think I had forgotten how good the original was and I walked into the film expecting an average movie instead of a sensational one. It was my favourite movie of the year and not only did it match the quality of the original, in many aspects, it improves on them.
Okay, basic plot: After Katniss Everdeen’s act of defiance during the 74th Hunger Games, Pan Am stands on the brink of revolution. Realising the power that Katniss now has, President Snow wishes to have her eliminated. But simply killing her would merely add fuel to the fire; so with the help of new gamemaker, Plutarch Heavensbee (Phillip Seymour Hoffman) Snow devises a way to have her die in the ‘right’ way. For the 75th Hunger Games, the tributes will be selected from the current pool of victors throwing Katniss and Peeta back into the savagery of the games. 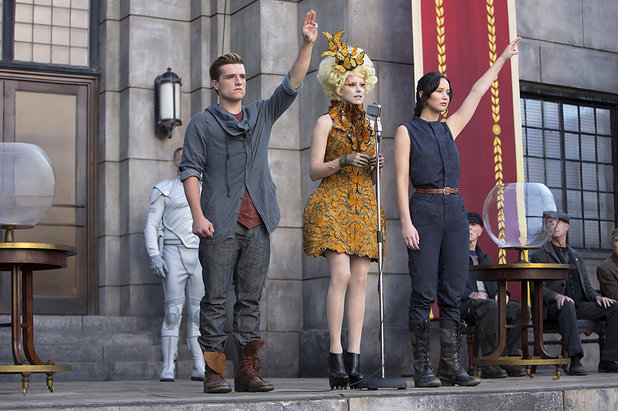 I loved the change in focus this film implemented. It isn’t a drastic change but rather a subtle shift in focus with the plot leaning towards the political aspects of the story rather than the violence of the games. I remember the first time I watched this movie; I was so impressed with the level of maturity and insight with which it handled its political themes. After the events of the previous movie, the situation in Pan Am is tense with notions of rebellion stirring among the districts. Katniss is the face of this rebellion – the symbol that the people can rally behind. Her act of defiance has sparked a revolution and the flames of that revolution threaten to destroy The Capitol and President Snow’s power. It’s testament to the power individuals can have in shaping the future of a nation. I enjoyed the way that screenwriters, Simon Beaufoy and Michael deBruyne, focused in on the politics whilst still providing enough action and drama to keep the film exciting.
Another great thing that the screenwriters do is that even though the stakes are large, they keep the focus central. Thousands of lives are at stake, the political and social structure of an entire nation hangs in the balance but they keep the focus on our characters and ensure that the story remains personal. We get to spend a lot of time with Katniss and Peeta and see how the games have affected them. They’re broken. They have acquired great strength through their endurance of this terrible experience but they’ve also become more fragile as a result. Josh Hutcherson and Jennifer Lawrence really understand the opposing facets of strength and fragility in their characters and display great skill in adding these elements to their respective portrayals. Lawrence, in particular, is phenomenal in this film and wears the burden of ‘unlikely struggle hero’ well. 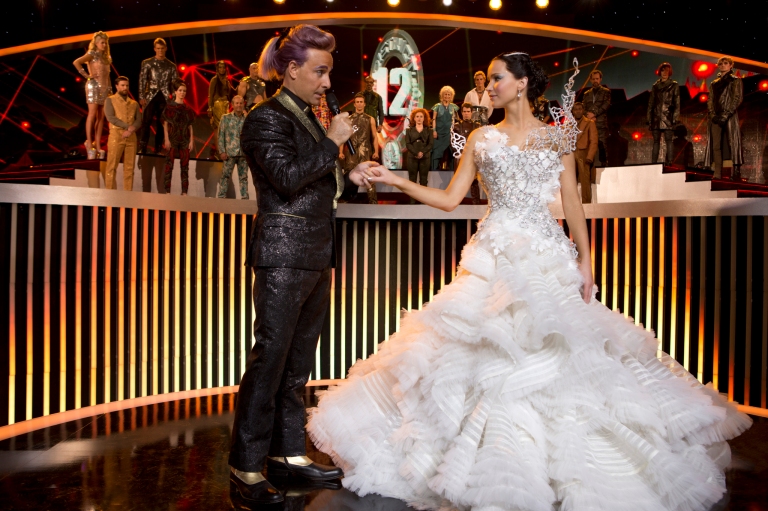 There are also a few notable additions to the cast with plenty of new characters and big name actors joining in the fun. Phillip Seymour Hoffman adds a real touch of class to this movie as the villainous Plutarch Heavensbee. Jeffrey Wright, Sam Clafflin and Jena Malone also do well in supporting roles. I think next to Lawrence and Hutcherson’s performances, Woody Harrelson’s work as the ever-inebriated Haymitch Abernaty was my favourite. There’s certainly no shortage of acting talent in this film.
There’s a change in director from the previous film with Francis Lawrence replacing Gary Ross at the helm. There’s great balance and scope in his storytelling technique that I loved and his focus, with regards to the political aspects of the film, is extraordinary. I do feel, however, he fell short in terms of the way he presented the games. The action in the first Hunger Games was brutal, savage and had a real raw feel to it; whereas the action in this film feels rather watered-down. It’s lacking the violent thrill that the first provided. This isn’t a major problem because the focus of this film isn’t the actual games but rather the politics behind them.
Overall, Catching Fire is a delight! I loved the progression in the characters and seeing the effect their actions are having on the world around them. The film is beautifully acted with great dialogue from the screenwriters. I suggest you watch this, 8/10

One thought on “The Hunger Games: Catching Fire Review”