So I watched The Hunger Games: Mockingjay Part II

It’s always sad when a film franchise comes to and end, isn’t it? Even though the collective time spent watching the franchise only amounts to about eight hours of your life; when it ends, you feel like you’ve lost something. You’ve walked a journey with these characters and now that it’s done, you’re left feeling a bit hollow.

Okay, basic plot: With the districts of Pan Am united against President Snow and The Capitol, the time for the final battle has come. Pushed to her limit by Snow’s atrocities, Katniss becomes obsessed with the idea of killing him. She breaks rank and leads a small military unit to Snow’s mansion where she plans to conduct her assassination. With Snow’s reign of terror seemingly coming to its end, Katniss must now be mindful of those who plan to take his place…

This movie was a bit disappointing. I’ll need time to properly digest it but, at the moment, I’d say that it’s the weakest of the franchise. That being sad, this isn’t a bad movie and I did still enjoy it but not as much as those that came before it. My favourite aspect of The Hunger Games has always being the politcal drama which surrounds the action, an aspect that I felt was sorely lacking in this film. This film has the most action sequences of the franchise but it’s often action without substance  which makes it less entertaining. Yes, our characters are being more proactive – shooting more and talking less but it doesn’t feel as impressive because it’s missing a layer of political subtext.

This film often oversimplifies things. The three films prior to this were highly sophisticated games of chess where fear, hope and political symbols formed the chess pieces. Mockingjay Part II is a game of checkers where all you need to do to win is simply eliminate one piece. I don’t want to go in to specifics because I don’t want to spoil the film for you but, in the three films prior, victory was achieved through intelligence and manipulation; in this film it’s all about brute force. Now, this isn’t the worst thing if you were craving more action from this franchise but I just didn’t feel it suited the overall style of the series.

There are also a hoard of new characters in this film. Far too many, in my opinion, and they’re only there for one purpose – to die. This is a film about war and in any war there are casualties or it wouldn’t feel real. So a lot of these characters that we meet are just cannon fodder because someone has to die or else they would be no sense of danger; and Katniss can’t die because…well she’s Katniss. This leads to the film feeling congested because you have all these characters but none of them mean anything to the plot. There are, however, some meaningful main character deaths. I hate seeing characters that I love die but at the same time, I love the weight it adds to the story. The only complaint I have is that certain characters’ deaths are handled far too quickly. If a major character dies, I need at least an extra ten seconds to mourn but this film just keeps on going without any respect for my grieving process. 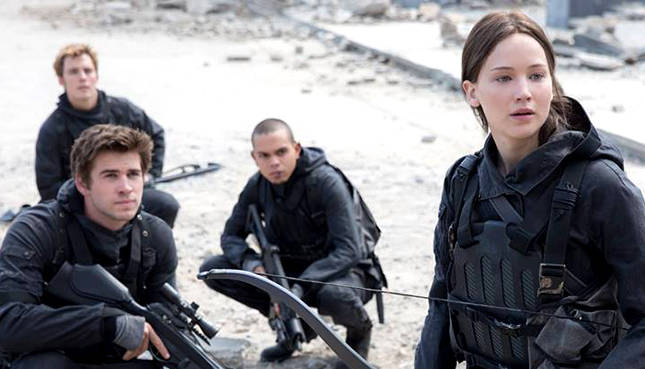 While this movie was disappointing, as I said earlier, it isn’t a bad movie. In fact, it’s still an incredibly enjoyable movie. The acting is once again superb. Jennifer Lawrence has shown such great consistency and depth in her portrayal of Katniss. This is a character who has gone through so much throughout the four films and, more than ever in this film, is broken as a result. The words I have always used to describe her performance are:  strength and fragility. Katniss walks the line between these two opposites beautifully and it’s all because of the mastery Lawrence displays in her portrayal of the character. Lawrence is phenomenal but the true star, in my opinion, of this film is Josh Hutcherson as Peeta. There’s a helplessness but also a selflessness to his character that I absolutely loved. He steals scenes and delivers a wonderfully understated performance.

Because there’s so much action in this film, a lot of characters had to be pushed to the periphery. I wanted to see more of Jena Malone, more Woody Harrelson and definitely more Donald Sutherland. Yes, we got more action but at what price? The last thirty minutes of this movie are its best. There’s a shift away from action and a, much welcomed, return to politics. Once again, can’t describe it without spoiling it but it’s evident that often freedom fighters end up turning into the evil they once fought against.

I just remembered a giant problem I had with this film – the lack of logic in Snow’s actions. Look, I hate Snow just as much as the next guy and wanted him to lose but he’s a complete idiot in this film. Snow wants to make a spectacle out of the deaths of the armies marching toward The Capitol so he has gamemakers turn the city into a giant hunger games arena. Now this is fine because we’ve seen the technology gamemakers have and how they can use this to cause death. Unfortunately this just use it to marginally slow down the charge of the rebels. Seriously, we saw them make blood-thirsty giant dogs in the first movie, couldn’t they just make a thousand of those and call it a day?  They couldn’t? Is it because they didn’t think of it? Is it because the script said they couldn’t? It’s because the script said they couldn’t!

Overall, Mockingjay Part II is not quite the movie I expected.  I think it underutilises its best qualities – both in terms of actors and plot elements. I did still enjoy this movie and the resolution it provides. As the closing credits floated up on the screen, a feeling of longing did the same in my chest. It has been a wonderful series of films and while this is not my favourite, it’s one I’ll definitely revisit. Make a trip to the cinema and see it. 7/10