So I watched Creed…

I wasn’t really looking forward to watching this movie, in fact, I almost had to drag myself to the cinema to see it. I’m glad I did because, and I saw this very seriously, this is one of the best movies I’ve seen this year.

Okay, basic plot: Adonis Creed (Michael B. Jordan) is the son of famed boxer, Apollo Creed. Adonis, like his father, is a fighter and dreams of being the best. He’s also determined to make it on his own, choosing to fight using his mother’s maiden name as not to gain an unfair advantage from his father’s fame. Unable to find a trainer who will work with him in Los Angeles, Adonis moves to Philadelphia and seeks out the help of Rocky Balboa (Sylvester Stallone). Balboa agrees to train Creed and, in the process, both men find their fighting spirit and the strength to overcome their respective demons. 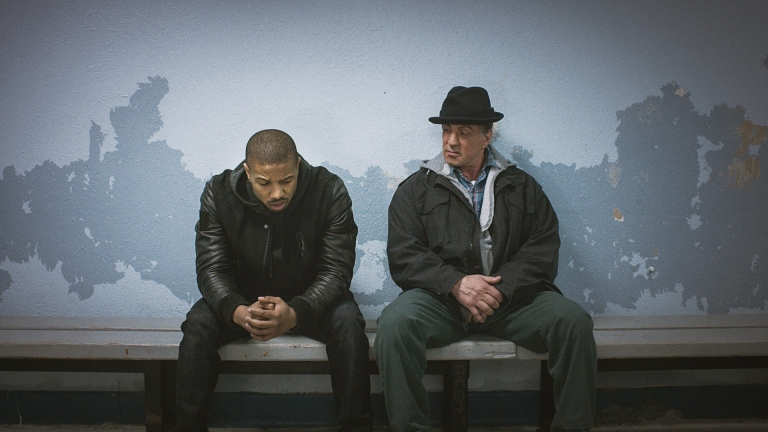 This film is beautifully made! In many ways this film is like Adonis – it’s a new addition, desperate to make its own name while struggling to step out the shadow of its predecessor. And just like Adonis, this movie does a great job setting itself apart. This isn’t a Rocky movie; this is a Creed movie. Yes, it’s made with the same spirit and has similar (in some places identical) plot points as the original; but it’s a fresh take on the classic underdog story.

The problem with sequels and remakes is that they often don’t recreate the essence or the spirit that fans loved about the original. Now, this isn’t a sequel or a remake; in my mind, it’s a spin-off but it still has all the features that we loved about Rocky. This film does an amazing job paying homage to Rocky but still manages to walk its own path and create memorable moments of its own. If you watch this film, without ever having seen Rocky, you can still appreciate it; because it’s a standalone film with its own self-contained story. But there’s just more to appreciate if you have seen the Rocky films.

Michael B. Jordan is phenomenal in this film. He fully commits to the physical transformation required to look the part but it’s the emotion and heart that he fills the character with that really make the performance. His acting is incredible and he put a smile on my face with his almost effortless swagger. This is the level of performance he needs to bring to his roles, not the garbage he offered us in Fantastic Four. Sylvester Stallone also puts in a star-turn in this film. He isn’t blowing anything up or beating anyone up in this film so it’s all about his acting and he does a solid job. He’s a little difficult to understand at times but he hits the emotional notes he needs to. Whenever I think Sylvester Stallone, I think Rocky; because he created the character and he has such a great understanding of him. This leads to a very strong performance. He won’t win an Oscar or anything but definitely entertaining to watch. Tessa Thompson also impressed me with her supporting role in this. She’s basically Adonis’ “Adrrriiiaaaaannnnnn”

Screenwriters, Ryan Coogler and Aaron Covington, deserve a huge round of applause for their writing of this film. This is an extremely poignant story filled with wonderfully complex characters. No one in this film is one-dimensional, everyone has layers and some personal struggle their dealing with. This makes all the characters interesting and no one is there to just fill space or be a plot device. I also enjoyed how the story is constantly moving forward. It never stagnates, it never gets stale and certain things occur in unpredictable ways so you’re constantly engaged.

One of the things I love about boxing movies is that often the opponent our hero has to beat isn’t some other fighter; but rather their own demons. This film addresses that and one of Rocky’s training techniques is to have Adonis stand in  front of a mirror and spar against his reflection. As I said earlier, every character in this film is facing a personal struggle and, even though Rocky isn’t stepping into the ring, he’s in a fight of his own and it’s probably the biggest fight of his life. I loved what they did with the character of Rocky and the struggle they put him up against. They manage to make him a big part of the movie without making the actual movie about him.

Ryan Coogler also directed this movie and he does a great job with that too. The majority of this film is set in Philadelphia and he does a great job giving the city a personality and making it feel like a character in the story. The way he chooses to film the boxing is also amazing. He gives you expansive wide shots and long takes instead of rapidly-edited shaky cam and it’s wonderful to behold. I, and everyone in the cinema, were cheering and grimacing as if we were at ringside and Coogler does an incredible job immersing and transporting you into the thick of the action.

Now with a film as iconic as Rocky come several iconic moments. The biggest of these probably being the training montage where Bill Conti’s ‘Gonna Fly Now’ swells up as Rocky runs up the stairs of the Philedelphia Musuem of Art. I was worried that they were going to try to recreate this and it would flop; but they actually handled it quite intelligently. They actually come up with a new theme song for Creed and change the location where he runs. Once again paying respect to Rocky without trying to duplicate it. There is a moment where they use the original Rocky theme song but it’s handled with real class and perfectly suits the moment.

Overall, Creed is almost like the son of Rocky. There’s a definite resemblance and a yearning to emulate the achievements of its father but it is something different, something capable of standing on its own two feet. It’s a great story that brought tears to my eyes and had me cheering like I was at ringside. GO WATCH IT! 9/10