So I watched Tomorrowland… 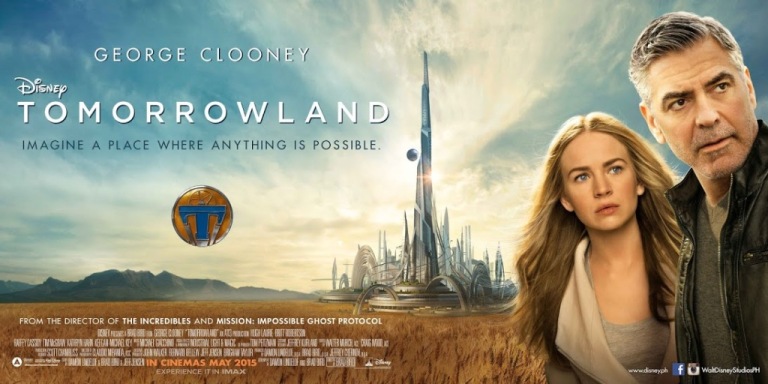 I had several opportunities to see this movie in theatres but I actively avoided it. Its trailer was just so horrible that it didn’t inspire any desire in me to go and watch this movie. At first I thought it was trying to be deliberately mysterious and confusing in an attempt to create wonder and curiosity. Now that Ive seen the movie, I realise that the trailer wasn’t horrible – it was just the best they could do with a horrible movie.

Okay, basic plot: Casey Newton (Britt Robertson) is a young, inquisitive dreamer who sees the solutions in life where others only see problems. Casey finds a lapel pin that briefly transports her to a magical place, called Tomorrowland, whenever she touches it. Tomorrowland is the world of the future with advanced technology and a sprawling metropolis. Casey becomes obsessed with finding a way to travel permanently to this new world and recruits the help of washed-up scientist, Frank Walker (George Clooney), to help her get there. However, Tomorrowland is not the perfect technological utopia that it seems and its many mysteries come with considerable amounts of danger.

Imagine that you’re a child. Now imagine that your parents tell you that you’re going to Disneyland the next morning. You wake up all excited, jump in the car but there’s bumper-to-bumper traffic all the way there. By the time you get to Disneyland, it’s five minutes before closing. You don’t have enough time to drink in the pleasure or the wonder of the place. That’s the best way to describe this film – unfulfilled promise. This film is just over two hours long and it takes an hour and a half before we even get to Tomorrowland and the main conflict of the film. That means 75% of this movie had nothing to do with its main plot. This film is so obsessed with building up to its adventure that it never gets around to actually beginning it. Or at least beginning it in time. It feels like they shot the beginning of this movie then forgot that they had other parts to shoot and just overextended the beginning and slapped on a rushed, ill-conceived ending.

This movie felt akin to a church sermon or a tedious lecture. I don’t want to get into spoilers but the main premise of this film  is that human beings are destroying the world – through burning fossils fuels, nuclear weapons, climate change etc; and the people in Tomorrowland (who are geniuses from all around the world) are there to come up with solutions to try to fix it. Now this sounds great but the movie hits you over the head too hard with the fact that human beings are lazy and ruining everything. This movie preaches to you instead of inspiring you. It needed more subtlety with regards to the way it handles these issues. It felt like I was at a summit on Global Warming instead of watching a fun, Disney movie. I don’t have a problem with a movie being educational or attempting to inspire change but it needs to remember that it’s a movie and needs to function well as a movie before it can reach for all these other things.

This is a disappointing piece of work from Brad Bird. Visually, the film is very enjoyable. I read that they actually built a lot of the elements and technology we see in the film and that really did help things look more authentic. The CGI used in the film was also really well done and didn’t stick out too much. So as a director, Brad Bird does alright in this film; it’s really his writing that’s the problem. Damon Lindelof and Bird wrote this film’s script and it’s so uninspired and half-cooked. This is meant to be a film about the possibility of limitless potential but its script is written with so little imagination. This film’s originality was marketed as its best feature but I couldn’t find an ounce of originality in the entire film. The film’s script is also out of proportion. There’s a lot of time given to our heroes but none at all given to the villains and point of conflicts in this film. The villains are also completely inconsistent in this film. In one scene they’re ruthless and killing humans for fun, the next they seem like they couldn’t kill a fly. This all leads to you not taking the villains as serious threats and, therefore, not fearing for our heroes.

The acting in this movie is pretty average. I think Britt Robertson and Raffey Cassidy put in the best performances; but simply because they have youthful enthusiasm. George Clooney and Hugh Laurie just kinda seem like they’re there to collect a paycheque and they’re more than happy to do the bare minimum to make that happen.

Overall, Tomorrowland is a case of what could have been. You can see its potential and it’s quite sad that it never gets anywhere near fulfilling it. The saddest part is that this is a Brad Bird film and his films usually ooze quality where this one just leaks incompetence. I wouldn’t suggest seeing it for any reason. 3/10