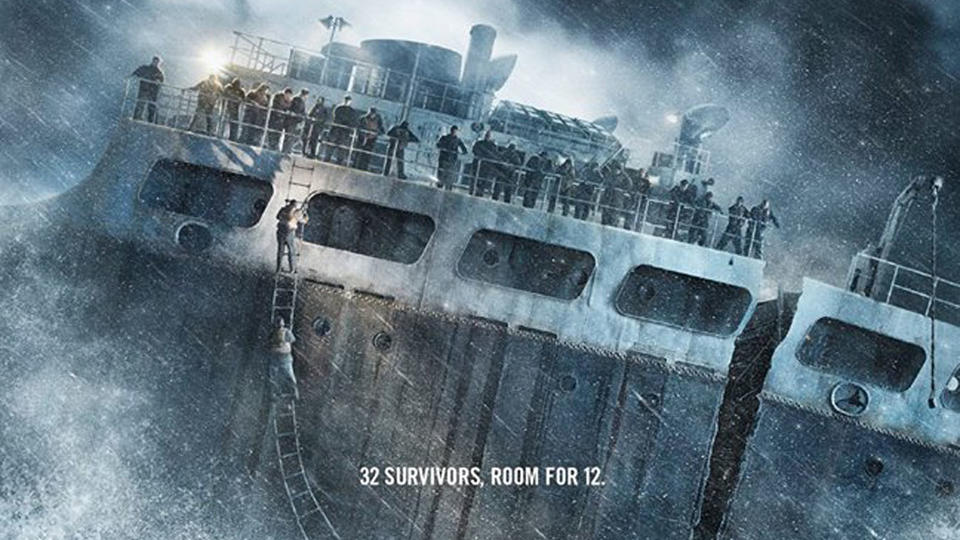 So I watched The Finest Hours…

I had quite a fun time watching this movie. I managed to score a free ticket from a local cinema chain to a pre-release screening of this film. Now there wasn’t a red carpet or tons of movies stars or anything but it was a lot of fun getting to see a movie before anyone else and been treated to complimentary popcorn and drinks. The actual movie, itself, was also quite enjoyable so overall, definitely a win.

Okay, basic plot: in 1952, US Coast Gaurdsman, Bernie Webber (Chris Pine) falls in love with Mirriam Pentinen (HOlliday Grainger). The two plan to be married (even though Bernie has his doubts).  Before their engagement can be made official Bernie, as per Coast Guard regulations, must first seek permission from the station commander – Daniel Cluff (Eric Bana). On the day that Bernie goes to ask for this permission, a huge storm hits the coast and he’s dispatched to assist the SS Pendleton, an oil tanker that is currently sinking. Bernie assembles a four man crew and goes out to brave the horrid weather conditions (in a ridiculously tiny boat) in an attempt to save the Pendleton’s crew. The mission is suicidal but Bernie forges ahead, unable to look to his future until he pays penance for mistakes of the past.

I really enjoyed this movie but not for the reasons, I think, the filmmakers intended. This is one of those epic films that’s made for IMAX and 3D, and is supposed to be a visually immersive experience. I think the best way to enjoy this movie is in IMAX (having now seen it in both IMAX and regular 3D) because 1. IMAX is just better for everything and 2. there are some breathtaking moments that deserve the larger screen and superior surround sound. I still can’t get over the power of IMAX speakers. There were moments when you could feel the blaring winds of the storm depicted in the movie because of the tangible sound waves the speakers create. That being said, this isn’t the coolest movie I’ve seen about a massive ship sinking or a tiny boat having to go to war against giant waves. This film never feels dangerous or as immersive as it could have been. This is mostly due to the way the film was made.

Portions of this film were filmed in a shipyard and – the way the actors describe it – there were giant wind-machines and water pumps that continuously drenched the cast in water to simulate rain. Now these parts of the film look authentic and feel real. The problem is that there are also large amounts of CGI in the film and these look fake and cheesy. This CGI immediately dilutes the sense of danger because your mind immediately recognises that the scene in front of you is fake. You can also see it in the actor’s performances. The acting isn’t bad but you can clearly tell when a greenscreen is behind an actor and rain is progammed in as opposed to when the actor is actually being drenched in water. It takes you out of the movie and cheapens the thrill. I also found the action repetitive and uninspired: a big waves comes, their tiny ship goes underwater for a few seconds then comes back up – repeat until boring.

So I didn’t really like the action but what I did like was the acting and the story. On paper this movie seems like a run-of-the-mill Man vs Nature  actionfest but its story was a lot more than this. Yes, man does battle nature but he also battles himself. All the events in this movie are caused by the actions of its characters and not simply bad weather. The oil tanker sinking is caused by the nonchalant negligence of its captain; Bernie being sent on this suicide mission is caused by his commanding officer, Daniel Cluff’s insecurity and Bernie accepting this insane mission is caused by his own feelings of guilt and inadequacy. The character’s drive the plot forward and the raging storm is merely a backdrop for their conflict. I found these parts of the story the most engaging and entertaining because they focused on the human element of natural disasters like this.

The acting in this movie is also very well crafted. Chris Pine does a sensational job as the softspoken and timid, Bernie. This is, without doubt, the best acting I’ve seen Pine do. He keeps his charm and likeability but tones it down to suit the character. Holliday Grangier also impressed me as Miriam. She’s a strong proactive character and hit the emotional high notes well. Casey Affleck is probably, next to Pine, the standout of this film. His character is another driving force in this movie and has an interesting story arc which Affleck depicted well. Eric Bana who starred as Daniel Cluff puts in an alright performance but he doesn’t maintain any consistency in his accent and it gets annoying.

Overall, The Finest Hours does alright. I don’t think it achieves what it originally set out to but it’s entertaining in other ways. The cast do a great job with plenty of understated but competent performances. It isn’t really worth the additional cost of IMAX but it’s worth seeing in the cinema. 7/10