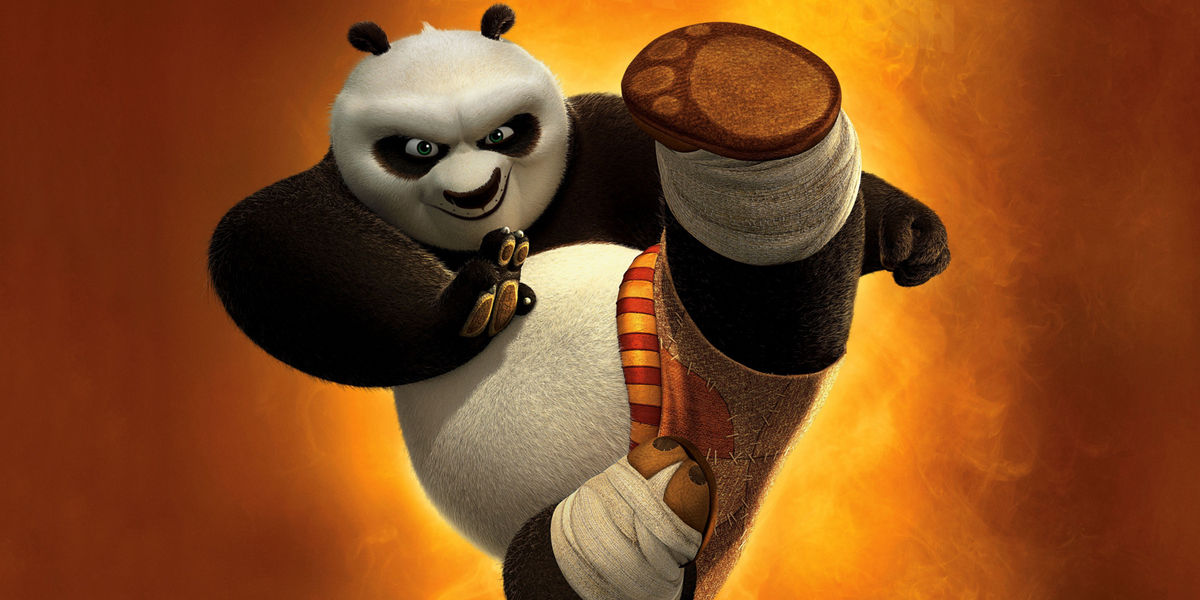 So I watched Kung Fu Panda… 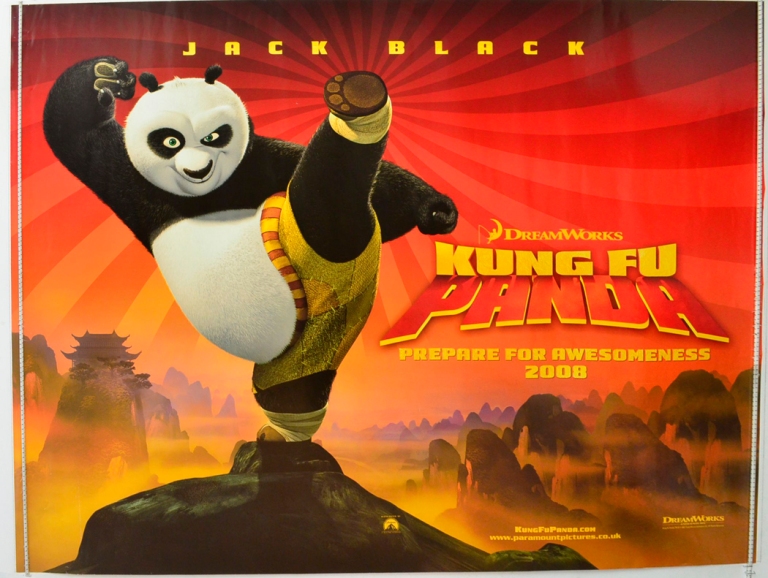 I’m a huge fan of this movie. I remember being intrigued ,when I first saw the trailer, by the idea of ‘Panda’ being a style of martial arts. I didn’t end up seeing the movie in theatres but when I did eventually manage to get my hands on it, I watched it about 6 – 7 times in a row in the space of three days.

Okay, basic plot: Po (Jack Black) – a Panda living in Ancient China – dreams of becoming a Kung Fu Master and fighting along The Furious Five – Tigress, Monkey, Viper, Crane and Mantis – five of the most famous Kung Fu masters in all of China. Po’s father – a goose named Ping (James Hong) – has quite a different vision in mind for his son’s future. Ping wants Po to follow in his footsteps and take over the family noodle restaurant. When Grand Master Oogway (Randall Duk Kim) has a vision that Tai Lung (Ian McShane) – an evil Kung Fu Master – will return and exact his revenge on the land, Oogway decides that it is time to chose The Dragon Warrior. A warrior who will be entrusted with the secrets and unlimited power of The Dragon Scroll. Everyone assumes that a member of The Furious Five will be selected but through an series of comedic mixups, Po is chosen. Po finally has the opportunity to fulfill his dream of learning kung fu but with that dream comes the impending nightmare of facing the all-powerful Tai Lung.

This film is a masterpiece! It takes all the splendor and mystique that I remember from watching Kung Fu movies as a child and infuses them with great levity and produces an undeniable classic. Yes, this movie is a fun animation with silly gags but it also has a fantastic sense of ceremony and prestige. The film was originally intended to be a spoof but co-director, John Stevenson decided that it would work better as a wuxia comedy. Wuxia is a genre of Chinese fiction or cinema that generally features heroes capable of superhuman feats of martial arts. While Kung Fu Panda is silly and takes a few shots at Kung Fu movies, it also takes itself seriously and strives to create a memorable, entertaining piece of cinema.

The animation in this movie is brilliant. I loved how the animation team chose to animate flashbacks and dreams in a different style to events currently taking place. The opening sequence in the film is a dream that Po is having and it features beautiful hand-drawn animation which is meant to resemble Chinese Shadow Puppetry. This is in stark contrast to the rest of the film which comprises of computer animation. The computer animation is just as splendid and the film looks magnificent. There’s also a great deal of symbolism and craft present throughout the film which solidifies its status as a meaningful modern addition to the wuxia genre. There’s a wonderful sequence where a character – with nothing but the movements of their hands – generates wind and this wind lifts up peach blossoms of the floor and these peach blossoms float to the roof and bring an item down. The film is full of majestic moments like this and because the film is a cartoon I felt the writers were allowed to bend the rules of logic even more than in a live-action wuxia (though live-action wuxias generally don’t hold back on bending those rules themselves anyway).

Now all that majesty and beautiful animation wouldn’t mean much without a compelling story at its heart. I remember a friend and I were discussing why you never get any fat superheroes? I replied that the unrelenting physical activity that came with saving the world would result in a hero who was muscular and ripped. My friend retorted that while being a hero would result in you being in shape, it wouldn’t necessarily lead to you having a six pack and giant biceps, and that overweight people need role models too. I mention this because it ties into the beauty of Kung Fu Panda. Po is relentlessly teased about being too fat to be a Kung Fu Master and, in any other movie, this would lead to him having to lose a bunch of weight and becoming everyone’s vision of what a kung fu master should look like. However, in Kung Fu Panda our hero is encouraged to embrace his so-called shortcomings and use them to succeed. I think that’s a great message and one that’s needed in a time where we’re all forced into chasing unrealistic standards of beauty and success.

The voice acting in the film is also fantastic. The quality of the cast is immensely impressive with the likes of Jack Black, Angelina Jolie, Dustin Hoffman, Lucy Liu, David Cross and Jackie Chan – to mention a few – lending their talents to bring the characters to life. The two central figures in this movie are Jack Black’s Po and Dustin Hoffman as Master Shifu – a Kung Fu master (who despite his protest) is charged with training Po. The two had great chemistry and while their relationship isn’t quite Daniel-sahn/Mr Miyagi, it is fun to watch and the two definitely learn a lot from one another.

Hans Zimmer teams up with John Powell to create this film’s score and – as with everything else in this film – the two do splendid work. The music composed for this film has a mystical and wonderfully archaic feel to it and perfectly blends with the overall tone and style of the film.

Overall, Kung Fu Panda is a wonderful film that refuses to get old. I don’t know how many times I’ve watched it but I know that every time I do it keeps on getting better. It’s definitely one worth seeing. 8/10