So I watched Guardians of the Galaxy…(again)

My little corner of the internet is turning 2 today! I simultaneously can’t believe that I’ve stuck with this for as long as I have and somehow can’t believe that it’s only being two years. To commemorate this special day, I decided that some reflection was in order. This blog has changed a great deal over the last two years from writing style to aesthetics to the way it interacts with other bloggers and visitors. So I thought it would be great to see just how far I’ve come by re-writing my first ever blog post. Now I haven’t read that blog post in quite some time nor can I remember the exact specifics of that first review so this is almost going to feel like an brand new review.

If you’re interested in seeing the difference time makes, click here before reading this post to see the original; or if you just wanna hear what I thought of Guardians now then read on.

Okay, basic plot: After Peter Quill (Chris Pratt) – a thief and member of a space pirate gang called The Ravegers – steals a mysterious orb he finds himself in the sights of Ronan The Accuser (Lee Pace) – a homicidal warlord intent on destroying the planet Xandar. Ronan dispatches Gamora (Zoe Saldana), a highly skilled warrior and assassin, to retrieve the orb from Quill. Gamora’s mission is disturbed by the arrival of Rocket (Bradley Cooper) and Groot (Vin Diesel) – two ruthless bounty hunters out to collect a bounty on Quill’s head. When the four are thrown into prison together, they form an uneasy alliance in order to escape. Although not the traditional heroes you’d expect, the four eventually come together – along with the bloodthirsty Drax The Destroyer (Dave Bautista) – in order to take on Ronan and guard the galaxy from his villainous reign of terror. 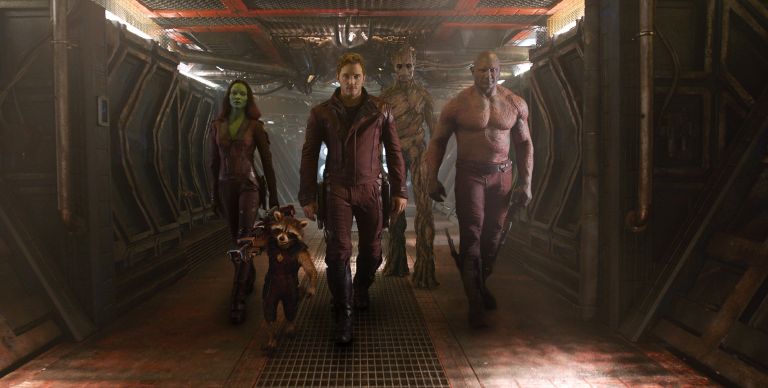 This film was probably 2014’s most unexpected hit and the film that proved that Marvel could make a successful franchise out of anything. The thing that Marvel movies excel at is their heart and Guardians of the Galaxy is another great example of this. This film’s best quality is its characters individual and collective charm. This is a result of an equally well-written script and powerful performances from a talented cast. This (along with The Lego Movie) is the film that launched Chris Pratt from goofball sidekick to quality leading man. He’s at the forefront of everything that makes this film’s cast a delight to watch. Pratt is not alone in his brilliance with Zoe Saldana, Bradley Cooper, Dave Bautista and Vin Diesel also putting in amazing turns.

I have to single out Diesel and Bautista for their sensational work. We’ve seen Diesel play a loveable and vocally-challenged character before with his heartfelt portrayal of The Iron Giant and he once again brings this charm and sincerity to the character of Groot. Diesel doesn’t have much to work with as Groot’s vocabulary is limited to three words; but he conveys an ocean of emotion. You can almost perfectly understand what he means every time he speaks. Pratt’s career wasn’t the only one that received a huge elevation from this movie, this film also introduced us to the brutish charm that is Dave Bautista. I used to be a huge fan of WWE so I’ve known Bautista for quite some time but this was the first film I’d seen him in. I was pleasantly surprised by the quality in his performance. He was funny, likeable, had perfect comedic timing and was absolutely convincing. I know I’ve singled out three performances but really everyone in this film does a fantastic job creating loveable characters.. 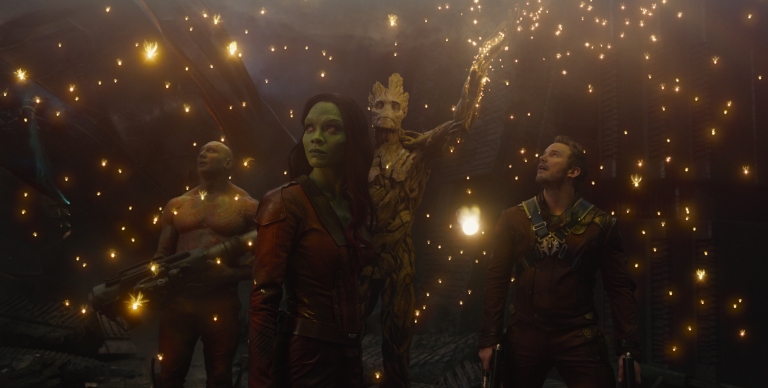 While we’re talking about loveable characters, let’s talk about my favourite character from this film – it’s soundtrack. Prior to this film’s release it  seemed like every movie was obsessed with using those ‘BWAASS’ sounds from Inception as the foundation of their score. Gaurdians took a giant step the other way and incorporated melodic pop songs into its chemistry. These songs weren’t just add-ons tacked onto scenes to avoid awkward silence but rather carefully selected accompaniment weaved into the film’s DNA. Whenever I hear one of the songs in the soundtrack, I immediately remember what scene it was in and how much I enjoyed said scene. Praise has to be given to composer, Tyler Bates and director, James Gunn for their innovative and fearless stand in regards to this film’s music.

Now when I first watched this movie – 2 years ago – there was no Suicide Squad but I guess that’s the beauty of a re-review, the chance to see the same thing through a different lens. So I would be amiss if I didn’t offer a short comparison between the two. It’s quite clear that Suicide Squad and Warner Bros were shamelessly trying to ripoff this film. From certain characters, to the aesthetics and, in particular, the soundtrack; Suicide Squad tried and dismally failed to recreate the magic that this film had in bounds.

Overall, Guardians of the Galaxy, is a well-written, beautifully scored and brilliantly acted film. You could make a case that it’s a Star Wars ripoff or even an Avengers ripoff but that might get in the way of you enjoying this well-made film. It’s definitely worth seeing 8/10

3 thoughts on “Guardians of the Galaxy Re-Review”