So I watched Florence Foster Jenkins…

2016 was definitely not the world’s best year nor was it a particularly good year for me in terms of cinema attendance. I missed out on quite a few entertaining films and even though I’m loving catching up on what I missed out on, I do wish I’d seen more of these films on the big screen. Florence Foster Jenkins is one I particularly regret missing.

Okay, basic plot: Florence Foster Jenkins (Meryl Streep) is a socialite living in New York who has a real passion for opera and music. Once a skilled pianist, Florence dreams of becoming a professional singer and putting on a grand show. The only problem is that she’s a terrible singer. A fact that her devout husband, St. Clair Bayfield (Hugh Grant) has spent the majority of his life hiding from her. Florence hires Cosmé McMoon (Simon Helberg) – a young pianist – to accompany her on stage. McMoon soon discovers the lack of singing talent Jenkins possesses. Initially amused by her voice, McMoon soon falls in love with Florence’s spirit and – along with Bayfield – conspires to make their upcoming performance a rousing success. 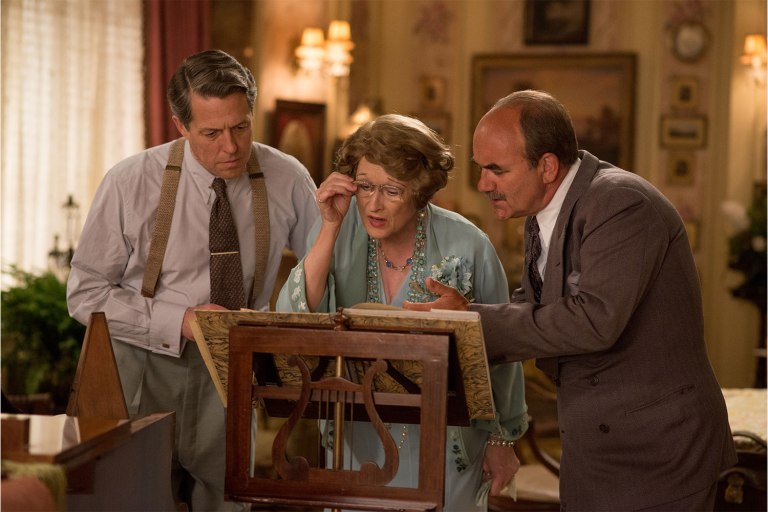 This film is a true lesson in the importance of art. Art is, above all else, an emotional experience and, as such, can only ever be subjective. Yes, there is technique and criteria by which we classify art as good or poor; but at the end of the day, art is meant to inspire emotion. If it does this – good or poor – it succeeds. That’s the beauty of this film, it celebrates the experience produced by art rather than its execution. Florence Foster Jenkins is a terrible singer but she sings with such honesty and fearlessness that you can’t help but appreciate her work.

The purpose of this blog is to review film and film is a form of art. I’ve done my fair share of praising but I’ve also done quite a lot of criticising over the years. To critique is my right as the audience member; but this film reminded me that it’s every artist’s right to pursue and present their art. Their art might be terrible but it has the right to exist. This film was a truly enlightening experience. Nicholas Martin crafts a script that is a celebration of Florence Foster Jenkins’ life and her devotion to her art. The script is full of warmth and emotion and brilliantly guided by the steady and subtle hand of director, Stephen Frears.

Contrary to what a certain US President might think, Meryl Streep is by far the best actor alive, perhaps even the best actor in history. From the second you hear the first line come out of her mouth, you know you’re in for a superb showing. Streep’s mastery of accents is second to none. What I love about her is that she never sounds like she’s putting on an accent, it comes to her with the ease and grace that only a legend can command. Her commitment to the character is extraordinary. She loses herself and becomes unrecognisable and you constantly have to remind yourself that you’re watching Meryl Streep. Other actors need prosthetics and extravagant amounts of make-up to achieve what Streep does with a simple turn of her head. She’s a master and there’s absolutely no one who can match her.

Hugh Grant also does well in this film. Grant’s always had this boyish charm to his characters and in this film he graduates that charm to aristocratic elegance. I’ve watched Grant in many movies (mostly romcoms) but this is the first time I’ve felt he’s played an actual man. All his other films feature characters who are children trapped in men’s bodies. While the character of St. Clair Bayfield does contain some boyish exuberance, it’s the furthest I’ve seen Grant stretch. He gives a good account of himself and manages to steal a few scenes from Queen Meryl. Simon Helberg rounds out the trio that forms this film’s main cast and while I did enjoy his character, I found Helberg’s performance to be lacking. He puts on this voice that sounds unnervingly unnatural. It hits your ear the wrong way and prevents you connecting with the character. Helberg is out of his depth but when you’re sharing scenes with Meryl Streep, even Jacques Cousteau would flounder.

Back to Helberg’s character – Cosmé McMoon. McMoon’s character arc in this film perfectly mirrors the audience’s feelings to Florence. At first you laugh at her singing because, honestly, it is quite poor. But then as you start to engage with Florence, you find yourself appreciating her singing and even growing to like it. She’s such a likeable character who’s devotion is inspiring and spirit contagious. She’s the type of person who you know would be in your corner constantly cheering you on and, because of this, you want to be in her corner and protect her. This is once again another sign of Streep’s brilliance. She makes you fall in love with the character.

Overall, Florence Foster Jenkins  is a highly entertaining film. It’s script is warm and engaging and Streep puts in a performance that will blow your mind. She’s intentionally being ‘bad’ in this role but she does it so well that you’ll love it. Hugh Grant does his best in the supporting role and Helberg joins him but is sadly not good enough to match the talent on display. It’s definitely worth watching 8/10