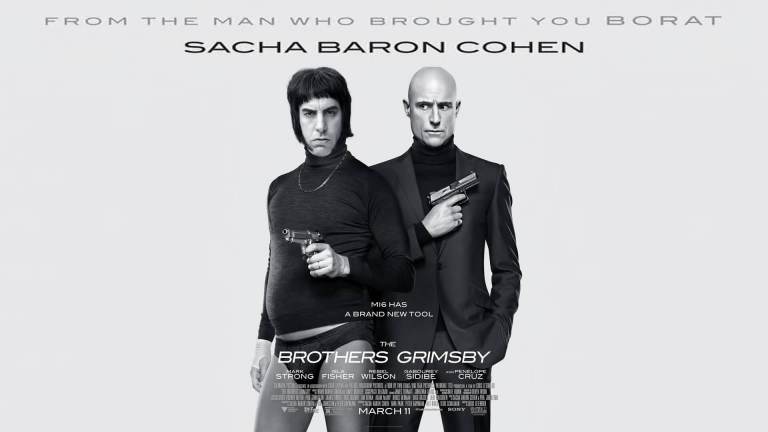 I remember being extremely excited to watch this movie but I, unfortunately, couldn’t see it opening weekend but I assumed I’d just see it the following week or so. Within the space of a few days, this movie was pulled from every cinema in my country. I didn’t bother asking why because Sacha Baron Cohen movies aren’t exactly regular viewing. After watching the film, I’m actually wondering how he managed to get this film released at all.

Okay, basic plot: Nobby (Sacha Baron Cohen) is an alcoholic, football-loving hooligan who lives in England’s slums. Nobby has been desperately looking for his long-lost brother, Sebastian (Mark Strong) for the last twenty-six years. When Nobby eventually finds Sebastian, it turns out that his brother is an international spy working for the British government. Nobby is eager to make up for lost time but Sebastian just wants to get on with his mission without his brother’s constant cumbersome interruptions. Though initially repulsed by Nobby, Sebastian finds himself having to turn to his older brother for help in saving the world.

This movie is hilarious! Not in an intelligent way. Not in a way you’d share at a sophisticated dinner party, it’s crass and obscene. I could easily write a scathing review that tears this film apart limb by limb. I could criticise its paper-thin story, the mount of unbelievable coincidences that it calls a plot, the uncouth toilet humour that it calls comedy; BUT I can’t. I can’t because even though this movie is trash, it made me laugh on a consistent basis. It entertained me. I even recommended this film to friends! Grimsby is a mess, that can’t be denied but it’s a beautiful mess. The humour is definitely not going to be to everyone’s taste but hell neither is Marmite and people still buy that.

I remember I was watching Jimmy Kimmel Live and Kimmel had Sacha Baron Cohen as his guest. Cohen had brought a clip of the movie but the clip was so explicit that it couldn’t be broadcast on TV. They could only show the first few seconds, after that, the content was apparently so graphic that they just decided to show the audience’s reaction to the clip. When I reached that scene in the movie, I began wondering how that scene was suitable for viewing in any form. It was probably one of the most disgusting scenes I’ve ever seen in my life BUT I LOVED IT! I was on the floor laughing. Like everything else in this movie, it’s so disgusting but you can’t help but laugh because it’s so ridiculous. Also the particular scene was actually set in South Africa, which is my part of the world so that was another reason to love it.

This film actually boasts quite a decent cast – Mark Strong, Isla Fisher, Ian McShane and Penélope Cruz. These are some serious actors with real talent. It’s quite clear that everyone in the cast is just making this movie for a laugh. No one’s going to submit their performances here to The Academy for consideration. They’re here for some fun and put in literally the bare minimum which is fine because the film is so ridiculous that it doesn’t need nuanced, thespian brilliance. You just need to say your lines and make sure you stay out of the way of the film’s hilarity.

Overall, Grimsby is a riot! This isn’t a good movie in any respect BUT it functions well and achieves what it sets out to do. I could not stop laughing and that’s the point of a movie like this. This isn’t Cohen’s most intelligent piece of work nor his best character performance but it’s worth a laugh and might inspire some good banter between you and your friends. 6/10